Blood Meridian or the Evening Redness in the West 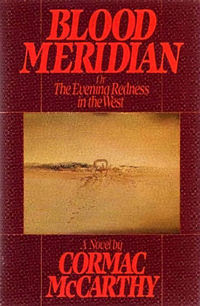 Cormac McCarthy’s story – such as it is – tells the tale of The Kid and exploits with the notorious Glanton Gang who hunted Apache Indians for fun and profit in Mexico following the U.S. -- Mexican War. The book is a very loose tale and might be called a character study except that the principle characters are absent for long periods during the narrative.

The book opens with The Kid (we never know his name which is typical in a McCarthy novel) being born in Tennessee during the Leonids Meteor Shower. In the next scene, he is older and attends a tent revival. A strange, hairless, albino like man enters the tent and accuses the preacher of having sex with a goat and a young girl. The man’s accusations stir the crowd at the revival into a frenzy and they attack and kill the preacher.

Flash forward a few more years, and The Kid is an older teenager or a young adult making his way toward the Texas territory The kid first joins a group of Army men whose filibuster against Indians roving the Mexican landscape meets with doom. He and a pal then join the Glanton Gang.

The Glantons were just the sort of people the American government were trying to keep out of the Texan territory and Mexico following the war. They killed in impunity. They were hired by locals to take care of local Indian problems and they hunted Indians, killing every Apache man, woman, and child they find. The Glanton Gang actually existed and McCarthy is said to have drawn on a semi-historical account of the Glanton Gang raids.

With the Glanton Gang rides The Judge – or Judge Holden. McCarthy makes us believe that there is something extra-human or supernatural about Judge Holden. When the men are holding off attacking Apache, they run low on gunpowder. Standing at the edge of a volcano, upon the brimstone, the Judge concocts a form of gunpowder using the sulpher and other minerals there. The key ingredient is urine. When they load their rifles with Holden’s gunpowder, they never miss a single shot.

Also traveling with the Glanton Gang is an ex-priest named Tobin (he was actually just a novitiate and never an actual priest) whose company The Kid enjoys. Both are fascinated with the Judge and his peculiar habits of walking around the Mexican sun naked, his white flesh exposed to the sun and his need to catalogue and log everything they see.

As far as a story, it’s pretty thin. The gang goes one place and they kill and scalp Indians. Then they go another place and kill and scalp Indians. They arrive at a town and they get drunk and trash the place before moving on to the next town to get drunk and trash the place. Most of the events of the book could be placed in any order and the story would not have changed.

McCarthy’s story is violent beyond comprehension. Kids are raped and murdered. The blood and violence flow freely through McCarthy’s highly intricate prose that often lead you to rereading entire paragraphs to grasp the action.

Finally, the gang seizes a ferry from some white men. They operate the ferry for awhile at a great profit, but are attacked by Yuma Indians who kill most of the gang and scatter the rest. The Kid wanders the Arizona-Mexican borderlands for awhile until he encounters the Tobin and another buddy. They encounter Judge Holden, but in the Judge’s mind, their interests no longer lie together and he tries to kill them to take their guns and gold. The Judge kills Tobin, but The Kid eventually make it to San Diego where he is arrested.

The Judge arrives a few days later and visits The Kid in jail. Judge Holden tells The Kid that he has told the authorities that The Kid was responsible for leading the atrocities carried out by the Glanton Gang. The Kid eventually reveals to his jailers where they can find the wealth amassed by the gang and they set him free. He then wanders about, eventually making his way to Los Angeles to coincidently be on hand when two of his old traveling buddies are hanged for their crimes in Mexico.

We then flash forward to 1878 – almost 40 years into the future. The Kid is now a man past middle age and McCarthy now call him, “The Man.” He is working as a mercenary in the American southwest.

One evening, he enters a saloon and finds his old friend, Judge Holden. They talk about their days of hunting Indians and Judge Holden declares the Man to be a disappointment and failure for holding pity and mercy in his heart for a heathen race. The Man tells the Judge that he’s nothing. The Man then leaves the bar and goes to the privy where he is surprised to find Judge Holden in the privy, naked, waiting for him. The Judge kills the man. Holden then returns, under the Leonids Meteor Shower, to the bar to join the whores in dance.

An epilogue follows that makes no sense and seems to have no bearing on the story at all.

This was the book of the month for our book club and I was the guy who nominated it. I nominated it because Cormac McCarthy is held in such high regard by so many readers and this was supposed to be his best work. I thought The Road was better.

I have mixed emotions about Blood Meridian. I am glad I read it. It made me reach intellectually to grasp McCarthy’s arcane prose. I finally decided to quit consulting the dictionary for words I didn’t know lest I never finish the book. It is good and proper to challenge one’s intellect in such a way occasionally.

I find McCarthy's disregard for standard punctuation to be pretentious bullshit. He doesn't use quotes and he doesn't use apostrophes for contractions. I read somewhere that he thinks these little marks clutter up a page. I think the key broke off his keyboard.

But I did not enjoy the book. When I read fiction, I want a good story. I don’t enjoy character studies which is why I assiduously avoid Hemmingway. Also, when I read fiction, I don’t want to have to work to hard at it. A story that challenges the intellect is fun. A story that scares you, makes you laugh, or moves you in some way is great. This book’s story was incredibly thin. There’s not a lot of there, there.

Most of the book club agreed with this assessment. The only person entirely captivated by it was the English professor in our group who was kind enough to explain to us the allusions to Faust, The Heart of Darkness, and others. It was his third reading of the book, so he knew it well going into the reading for book club.

I saw The Judge as the Devil and McCarthy put in front of the reader all of the traditional satanic symbols for the reader. The fire and brimstone of the volcano rim, the red desert setting, a goat off in the distance. Judge Holden was Mephistopheles as far as I was concerned.

Perhaps he was supposed to be the embodiment of American attitudes toward the American Indian during the 19th century. That Americans perpetrated the greatest evils ever committed by our government and our culture upon the American Indian is not in doubt. Perhaps that was the allusion McCarthy was going for.

I know this book is held in high regard by American literati. Time ranked it 22nd on its list of 100 great novels of the 20th century. I wouldn’t call it a great novel or even a great book. I won’t read it again, but I’m glad I read it once.
Posted by Brian Schwartz at 10:51 PM