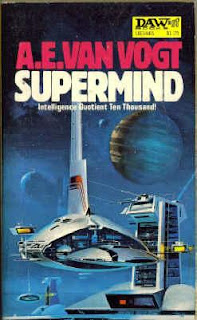 The “story” centers around beings of advanced I.Q. in the galaxy and how they migrate. Spanning the story is an organization based on earth called Research Alpha which is a repository of the knowledge of the Great Galactics whose role it was to protect lesser developed solar systems from being overwhelmed by greater ones.

In the first segment of the story, two fugitive Dreeghs – energy vampires that suck blood and use energy – land on Earth. They are in dire need of blood and attack two humans right away to restore themselves. They then bury their spaceship under a New York restaurant where they dwell.

The murders shock the people on earth because murder is almost unheard of since Dr. Ungarn – currently residing on an asteroid near the Jupiter moon of Europa – devised serum to rid most of mankind of its murderous impulses. The story is investigated and reported by one of the world’s most recognized reporters – Bill Leigh. Soon after the publication of his article, he is invited by a stranger to his favorite New York restaurant to dine in a private room.

Leigh arrives and soon is joined by a young woman who hastily takes him through a secret door to a subterranean chamber where the Dreeghs are living. The young woman confronts them and warns the Dreegh that Earth is to be left alone. As a lower, fugitive race, the Dreegh will be dealt with most harshly.

Leigh is stunned and isn’t sure how to report this story and make it believable. But before he can, he is kidnapped by the Dreegh who use their mental powers to convince him to travel to the asteroid where Dr. Ungarn lives to destroy him and his daughter. The Dreegh suspect that the Ungarns are agents of the Great Galactics who will prevent them from settling and taking over Earth.

Leigh manages to hitch a ride on the freighter that routinely transports supplies to Dr. Ungard’s laboratory near Jupiter with no idea what his real intentions are, other than to find the girl who he met on Earth that he is sure is Patricia Ungard. They arrive on the asteroid and just as they are meeting with the Ungards, the two Dreegh arrive and capture them. They inform the group that more Dreegh are on the way and that this vanguard against their invasion of this solar system will be destroyed.

As the Dreegh prepare to draw the life force out of their three victims, a powerful mental force awakens in Leigh and he is able to slay the Dreegh before they can harm Patricia or her father. He is then contacted by a higher intelligence that informs him that he has never really been Bill Leigh, reporter. He learns that it is he who is one of the supreme beings of the Great Galactics. Leigh, unable to comprehend all this, jumps into a small space shuttle and flees to earth, ending the first portion of the book.

In a chapter in between, two scientists at Research Alpha discuss the events that have just unfolded and the awakening of one of the Great Galactics, thought to be gone from material existence. They see Leigh’s victory over the two Dreegh as a positive development in their quest to raise the I.Q’s of certain beings to that of the supreme beings.

The second phase of the story opens with the freighter captain, who was captured and bound by the Dreegh on the asteroid, escaping his bonds. He joins Patricia and her father who are awaiting the arrival of Patricia’s betrothed – a man she has never met before. When he arrives, it turns out he is an advance scout for the Dreegh invasion party.

The Dreegh captures the Ungards and Captain Hanardy. The Dreegh drains some life force from Hanardy and puts him into a stupor. Nine more Dreegh arrive and they appropriate Hanardy’s freighter to stage an invasion of the spaceport on Europa where they plan to tap into the blood supply of the humans there.

But like Leigh, the somnolent Hanardy finds a great intelligence inside himself – intelligence planted there by Research Alpha – and he is able to seize control of the minds of the Dreegh. After they take blood from almost 200 residents of Europa, Hanardy acts to drive them away. Using his vast mental power, he propels the Dreeghs thousands of light years away from our solar system.

In the third segment, which bears upon the previous two not at all, a Research Alpha scientist decides to test a serum he has developed to expedite the evolution of man’s mental abilities. He first injects it into a typist who works for the laboratory’s chief administrator, then into her boyfriend. He hopes to watch them evolve together and perhaps create offspring.

The young woman immediately notices she is smarter and more mentally sharp. She suspects that the strange pinch she felt on her shoulder when the doctor was standing behind her has something to do with what is happening to her. Her boyfriend, whose shot didn’t quite take, becomes lethargic and ill.

The scientist keeps his subjects under close observation and decides to inject them with a second, higher level serum. The young woman’s mental powers increase dramatically and draw the attention of the head of Research Alpha and his assistant who try to monitor the woman’s evolution to determine if she will act as an agent of good or an agent of evil.

The boyfriend also receives a second injection, but his condition deteriorates. The scientist decides he must die and tries to kill him by drowning him. But the leaders are able to save him and bring him back to the laboratory.

Meanwhile, the young typist finds her new mental abilities astounding. She is able to send her consciousness out into the universe to observe cosmic events. She can delude people into believing whatever it is she would have them believe. While she is not evil, she is undisciplined and the heads of Research Alpha – they themselves mentally superior beings – decide they must reign her in. They set a trap for her, using the boyfriend as bait, to bring her back to the lab.

She returns to the lab, knowing that the snare is set, but not caring. She has enough humanity in her to be concerned about her boyfriend. The lab director shows her her boyfriend who has physically devolved into a 22 inch tall, dwarvish creature. The lab director explains that the serum effects the genetic code of every person differently because every person has a different genetic code.

She asks her old boss what he has planned for her. He says that there is a man here on Earth that she will marry and mate with to start a race of Great Galactics on Earth. His name is William Leigh.

There ends the story.

I would like to read Asylum as a stand alone story because its elements of intergalactic vampires coming to Earth to take over has great appeal to me. The story was well written except where obviously new material was injected into it to link it and transition it to the second phase of the story.

The Proxy Intelligence might have well been a decent stand alone story. Here, it is a mishmash of the original with a great deal of obviously injected and incongruous new material that makes it disjointed and hard to follow. Van Vogt may have developed the character of Patricia in his original story as a strong willed, self sufficient woman. In Supermind, she is that at times, but at other times hopelessly weak and indecisive for no explicable reason.

Research Alpha – even in this fix up book – is a great stand alone story and reveals what a great teller of short stories A.E. Van Vogt was. The characters are interesting and complex. In most stories of this sort, we see illustrated the old maxim of how absolute power corrupts absolutely. In the case of the young typist, it does corrupt her to some degree because she enjoys her omniscience. However, she retains her essential humanity and makes conscious decisions not to harm anyone. While it is long for a short story, it is well paced with no wasted words or actions.

Van Vogt is one of the more prolific writers of the Golden Age of Science Fiction. While many names from that era like Ray Bradbury, Robert Heinlein, and Isaac Asimov are recognized by most people today, Van Vogt has faded from the notice of even most science fiction fans.

Van Vogt wrote action oriented stories with thin characters. This was acceptable in the pulps of the 1940s and 1950s. More refined readers of today expect more. Bradbury, Asimov, and even the technically oriented Heinlein developed greater characters and greater settings for their tales. They also incorporated human emotion, human heroism, and human frailties into their tales. Van Vogt comes up short in this area most of the time.

I have several of these thin pulp books on my bookshelf authored by Van Vogt. While horribly dated, some are quite enjoyable. Supermind does not rank among Van Vogt’s enjoyable books. It reads like an author who has quickly and haphazardly pieced together unrelated stories to get a book to market.
Posted by Brian Schwartz at 5:45 PM