Book to Radio: There Will Come Soft Rains 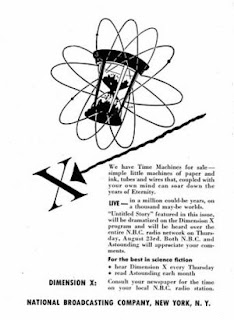 Book to Radio: There Will Come Soft Rains
By Ray Bradbury from his book, The Martian Chronicles
Adapted to radio by George Lefferts
Dimension X broadcast, June 17, 1950

In June of 1950, radio show Dimension X featured two stories by one of the “new young writers of science fiction, Ray Bradbury.” The first of these was There Will Come Soft Rains. The other was Zero Hour from The Illustrated Man which I will review later

There is no reference in the script to Mars. This empty house is on a post-atomic Earth.

The story opens with the real estate agent pitching the house and all its features in the futuristic year of 1980. The house came equipped with self warming blankets, beds that make themselves, talking book recordings, "mouse things" that take away all the dust. Set the menu on the oven for the week and it will prepare all of your meals.

The automated house goes about its day, preparing breakfast. The writer of the script and the director demonstrate real talent in the presentation with the discordant rhymes the house chants, backed with discordant music as the house announces the time and the tasks to be performed.

Narrator Norman Rose goes on to describe the dark shadows scorched onto the walls of the house – remnants of the bodies scorched into the surface by atomic energy.

The narrator’s voice picks up speed. The house performs its tasks ever faster until evening arrives when the home finally asks which poem the residents would like to hear. Not hearing a response, it selects Sarah Teasdale’s There Will Come Soft Rains. The pace slows as Teasdale's soothing prose unfolds.

However, a tree falls outside and spills solvent onto the stove. The house catches fire. The house begs for help. It begins to maniacally carry out its tasks before the wiring burns. It eventually crashes into dust and rubble.

The story ends as Teasdale poem ends – with no one mourning the passing of mankind.

Norman Rose is a gifted radio voice talent and his narration, growing more frantic with the discordance going on behind him makes this absolutely creepy. It deviates far from Bradbury’s text, but writer, George Lefferts shows his genius in taking this chapter from Bradbury’s book and making it into something disturbing.
Posted by Brian Schwartz at 9:25 PM