The One Tree by Stephen R. Donaldson 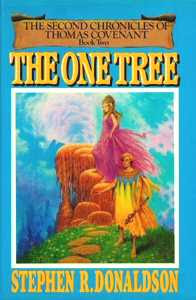 The Second Chronicles of Thomas Covenant the Unbeliever, Book 2
The One Tree
By Stephen R. Donaldson
Copyright 1982

The One Tree picks up at the end of The Wounded Land. Covenant has just delivered the tormented souls of the Giants of Seasearch their long sought peace by sending them to their final rite of Camora – the Giant rite of cleansing pain and grief by fire. In exchange for Covenant helping end the torment of their lost brethren , the Giants of Seasearch agree to take Covenant to find the One Tree from which the Staff of Law was hewn.

Without any real idea of where they are headed, The party sets sale aboard the Starfare Gem – the giant warship made of stone. After a few days out to sea, Linden becomes uneasy. She senses a raver is aboard the ship. The Giants conduct a search of their massive ship, but find no stowaways. Just as they complete their search, the ship is attacked by a swarm of rats containing the spirit of the raver.

Covenant is bitten which reactivates his venom. His power grows and he begins to let loose with blasts of white magic from his ring. Fearing for the safety of his friends and their quest, Covenant mentally seals himself off from the rest of the world, lapsing into a catatonic state.

Linden, ever fearful of intimacy and human contact, is forced to enter Covenant’s mind and possess him so that she can force him to come back. Covenant is restored, but more nervous and paranoid than ever about his growing power.

The Giants lead the ship to an island inhabited by a race known to Giants. The First of the Search informs Linden and Covenant that the inhabitants of this island are temperamental barterers with whom they need to tread lightly. Covenant and his Giant host come ashore along with several Bloodguard. There, they are greeted by the Elohim – a race of people who are not quite corporal, who emerge and disappear from the earth and air. From them, they hope to learn the whereabouts of the One Tree.

The Elohim are delighted to greet Linden Avery, whom they hale as the Sunbane and savior of the land. However, they are exceptionally displeased to find out that Covenant possesses the ring. Linden perceives that the Elohim are not a people but an entity composed almost entirely of earthpower. This the Elohim acknowledge. They also claim that they are forbidden in aiding the quest in any way.

Covenant pleads and then demands that they reveal the location of the One Tree. The knowledge was stored in Covenant’s mind by the Forrestal when Covenant visited with his dead friends in the plains of Andelain. The Elohim meet Covenant’s demand. They reveal to the Giants the location of the One Tree. However, in the process, Covenant is once again rendered semi-comatose. When the ritual is done, he will not communicate or respond. He simply mutters, “Don’t touch me,” to any statement.

The Starfare Gem once again sets sail with the party aboard. Days pass and Covenant’s silence persists. Linden fusses and worries about how she can release whatever spell the Elohim have cast upon him. Meanwhile, the one Giant aboard the ship who shares Linden’s earth sense inexplicably starts attacking a ship’s mast. The giant forces from the stone the leader of the Elohim, Findail, who stowed away aboard their ship. Findail refuses to reveal his purpose aboard their ship and refuses any aid. He, like the ur-vile Vain, takes a place on the foredeck of the ship and remains still.

The next day, the ship is hit by a giant storm. It is severely damaged by the storm, having lost its center mast and taking on water. The crew is forced to put in at an island called Bhraithar. Bhraither is a militaristic society ruled by a leader known as gaddhi, Rant Obsolane who it is said dominated the powerful and evil Sandgorgons – an indigenous creature thought to be indestructible – that had bedeviled the inhabitants of the city for generations.

Once again, Linden is joined by the First of the Search, along with several other Giants and Bloodguard. They also bring Covenant along. They are first greeted Kaseryn – the Gaddhi’s major domo who is solicitous and cordial. Kaseryn assures the Giants that they may use whatever stone is necessary to fashion a new mast and that their supplies will be restored.

They are then taken to meet the Gaddhi who turns out to be a small, petty, seemingly powerless man. IT occurs to Linden that Kaseryn is the power behind the throne.

Kaseryn’s true goal is to possess Covenant’s ring. One night, he kidnaps Covenant from his room and attempts to release the spell holding his mind hostage. Unable to free Covenant and compel him to give up his ring, he decides to turn his attention to Linden.

Kaseryn takes the party hostage with his guards and leads them to the city wall, accompanied by the Gaddhi. Once there, the Gaddhi – petulantly angry with the party over the slaying of one of his guards – tosses a piece of his jewelry over the wall and demands that the Bloodguard Cail retrieve it. A rope is lowered and Cail descends. There he is attacked and slain by a Sandgorgon. The rest of the party is taken prisoner and Kaseryn promises more death if Linden will not free Covenant’s mind so he can give up his ring. Linden enters Covenant’s mind, but she tricks Kaseryn by instructing Covenant to say the Sandgorgon’s name, thus summoning it. She removes the spell placed on Covenant and places it on herself to free him. He says the Sandgorgon’s name, summoning the creature who immediately begins to attack and destroy the city’s walls.

Kaseryn seizes Covenant and takes him to his laboratory to take the ring. Before he can, however, the Bloodguard Brinn kills him and saves Covenant.

The party retreats from the city as the Sandgorgon destroys it. They get to the Starfare Gem to find most of the repairs completed and provisions replaced. They flee Bhraithar headed toward the one tree.

Covenant and Linden fall in love.

They sail for days and eventually reach the island that is home to the One Tree. The party takes a boat ashore, accompanied by Vain who takes it upon himself to enter the boat, and Findail. Once there, Brinn tells them that their people believe that one of their own is the guardian of the One Tree and a Bloodguard must best him in battle for access to the tree to be possible. To master the guardian, Brinn tells them, is to learn the meaning and the purpose of their rigid and joyless existence in servitude.

Brinn ascends the cliff and fights the guardian, besting him. Brinn returns to the party and tells them that he has taken the place of the guardian for all time and directs the party to follow him to the One Tree.

The party arrives in a deep cavern inhabited by a solitary, giant tree. Linden can sense the overwhelming earthpower in seeping through the bows and the trunk. As Covenant begins to search for a bow that is straight and true to serve as the new staff, the Giant Cable Seadreamer, gifted with earthsight and cursed with speechlessness, tries to get Covenant to stop what he is doing. Finally, in frustration, he rushes at the tree, summoning its true guardian.

The Worm of World’s End, Findail tells them, is the guardian of the One Tree. Covenant’s white magic springs to life and is more powerful than ever. He prepares to slay the worm to gain the tree. Findail tells Linden that events have transpired to the designs of Lord Foul. Lord Foul wanted Covenant to gain the One Tree to fight the worm. To best the worm, Covenant, now brimming with uncontrollable white magic, will unleash enough power to destroy the Arch of Time and release Lord Foul from The Land and allow him to do his will across the cosmos.

Meanwhile, a change has come over Vain. He is struck by one of the balls of energy unleashed by the arrival of the worm. His arm, bearing one of the bands of the original Staff of Law, turns into wood.

With Covenant ready to burst with power, Linden is able to talk Covenant down. Recalling the cryptic words the ghost of his old friend, High Lord Mhoram, “that which you seek is not what you need,” he releases the power.

The island begins to shake and collapse around them. The party flees with Brinn’s help. They return to Starefare Gem in time to watch the island collapse. The quest for the One Tree and a new Staff of Law has failed.

Thus, the book ends inconclusively with the party having achieved nothing. This is my primary frustration with this book and the reason it is the only book in the entire series I did not like at all.

The pace of the book is ponderously slow with page after page of lugubrious introspection on Linden’s part. This book does develop her character a great deal. But she is revealed as a pitiful, mousy person full of self loathing. Perhaps Donaldson was trying to make her more pitiful than Covenant. But at least Covenant was defiantly pitiful and self loathing.

The two diversions both feel like they were tacked on to pad the story. Findail does become essential to the story later. But he joins the party early in this book and is set on the foredeck of the ship, out of the reader’s way and out of his mind. That seems like cheating a little. The trip to Bhraithar is a pointless diversion that adds nothing to the central story.

Donaldson spends almost 500 pages in taking the reader on a doomed quest that accomplishes little and reveals nothing. I understand the concept of a trilogy and how each book is but one segment of a story. But each segment must advance the central plot. In The One Tree, Donaldson zigs and zags around, but doesn’t take us anywhere.
Posted by Brian Schwartz at 4:17 PM