Cry for the Strangers by John Saul 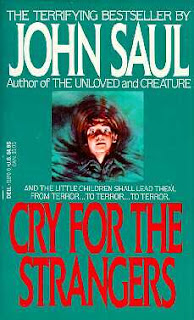 Cry for the Strangers
By John Saul
Copyright 1979

Starting with his first book, Suffer the Children, John Saul almost relies on a template for constructing his stories. He opens with a prologue that describes some evil deed years prior. Then, he moves to present day and that evil is revisited upon his characters. Such is the formula in Cry for the Strangers.

The prologue is set on a stormy Washington beach. An older couple is buried up to their necks in the sand. The surf is pounding away at the shore as a storm builds. Each wave brings the tide closer to the helpless victims. Dark figures dance a ritualistic dance around them. A little boy watches from the seclusion of nearby woods.

The boy awakens the next morning to find his grandparents, with whom he lives, aren’t home. He runs to the beach to find them dead, drowned in the surf. A voice whispers, “Cry. . .Cry for them. . .and for me!”

We then flash forward to current time. Psychiatrist Brad Randall and his wife, Elaine, are looking for a quiet town where they can live for one year while Brad writes his book on biorhythms. They arrive in Clarks Harbor – a seemingly idyllic little town on Washington’s coast. It seems perfect.

While they are having lunch at the local inn, Brad is surprised to see the father of a former patient. Brad treated Glen and Rebecca’s son, Robby, for a mental disorder that made him incredibly hyperactive and destructive. Brad is surprised and pleased to learn that, since they moved to Clarks Harbor, Robby’s troubling malady has disappeared.

The Palmers love what Clarks Harbor has done for Robby, but it has not been good to them. People in Clarks Harbor despise outsiders. Glen is an artist trying to get an art studio up and running in the small fishing village, but has encountered passive resistance from residents who deliberately overcharge for services and deliver goods late. Were it not for Robby’s incredible cure, Glen tells Brad, they would not be in Clarks Harbor.

The only rental property available in the village is adjacent to the cabin being rented by the Palmers. Like the Palmers' cabin, it has no electricity or gas, but is habitable and has direct access to the beach. It is owned by the town sheriff, Harney Whalen who hates outsiders more than most residents of Clarks Harbor.

Whalen is being harassed by the wife of a fisherman who recently drowned, trapped in his own nets. The wife is certain that her husband’s death was not an accident. But Pete and Miriam Shelling are not natives to the town, having lived there but 15 years, so Whalen is not inclined to investigate too thoroughly.

A few days later, after warning Greg Palmer that bad things are in store for him and his family, Miriam Shelling hangs herself from a tree on the beach.

The Palmer children react differently to Clarks Harbor. Robby loves it. He loves the beach and he especially loves the storms when they blow him. They fill him full of energy and excitement and he enjoys venturing forth from the house to take them in.

The storms bring dark, disturbing images of ghosts dancing on the beach to his sister Missy, who hates Clarks Harbor and only accompanies her brother on his forays into the storms to avoid being left alone.

Whalen is troubled by the Palmers moving into a cabin down by the beach and he resolves that he won’t rent the house to the Randalls. Whenever strangers come to Clark’s Harbor, bad things happen to them. Whalen wishes strangers no ill will. He, and almost everybody else in town just want them to stay away.

Whalen meets the Randalls at the house and tells them how difficult life will be for them in the primitive home and in the village that hates strangers. He then rents the house to them, not remembering later that he did so. Harney Whalen has been subject to blackouts lately. He loses hours when he has no idea what he’s been doing or where he’s been. The Randalls return to Seattle for their belongings to relocate for a year.

Meanwhile, life for the Palmers gets a little easier. Robby and Missy endure the taunts and torments of their schoolmates who don’t like strangers any more than their parents. But Glen develops a friendship with Whalen’s only deputy, Chip and Chip helps him complete the remodeling of his art studio.

One evening a giant storm builds to the west and the fishermen of Clarks Harbor know to pull up anchor and head in. A pair of brothers who have ventured south get caught in the storm and head for Clarks Harbor. They make it in just before the storm. They check into the inn before the older brother returns to the harbor to secure the boat for the storm.

While he works to secure the boat, it is set free from its moorings. He tries to start the motor to bring it back into the harbor, but finds it was vandalized in the short time he was gone. He is helpless against the tide that soon smashes his boat against the rocks where it finally explodes, killing him.

Whalen investigates and his first inclination is to blame Glen Palmer for no other reason than he is not a native of the town. He finally concludes it was an accident. The younger brother wants a more thorough investigation, telling the sheriff that his brother was an experienced seaman and would not have been so careless. But Harney Whalen puts forth little effort in investigating the deaths of outsiders.

Whalen is also not happy that his deputy Chip – who is also his nephew – is getting friendly with Glen Palmer. One day, as Chip looks on, Whalen takes the please cruiser and uses it to splash mud onto the artwork Glen has displayed outside. He dares Glen to complain, which he does not.

Meanwhile, the Randalls move into their home down the beach. Shortly after their arrival, Jeff, the dead fisherman’s brother is found in the woods with his neck broken. The body is found on the Palmer’s property and again Whalen is inclined to blame Glen. But with no evidence, he can’t hold him.

Chip becomes concerned about his uncle. He can tell that Whalen is not himself and that there is definitely something unhealthy about his attitude toward strangers. One evening, he sits down with his grandfather who tells him the whole story about Harney Whalen.

Whalen’s grandparents owned a large chunk of the land that is Clarks Harbor, Chip’s uncle tells him. Harney’s grandparents leased the timber and mineral rights for some of the land to a company out of Seattle. When the lease came up for renewal, Whalen’s grandparents would not renew. Later, they were found dead on the beach, buried up to their necks in sand. Most people concluded the owner of the company carried out the murderous deed. But, as Chip’s uncle points out, the Indians that inhabited the area believed that man took from the sea and the sea demanded something in return – souls. Harney Whalen, Chip’s grandfather points out, is part Indian.

That night, a monster storm hits Clarks Harbor and Robby Palmer is driven to go outside and take in the sights and sounds of the storm that so enliven him. Missy tells her mother who ventures out into the storm with Missy in tow to find Robby before whatever got Jeff, got him. As they are searching, Missy feels a presence creeping up on them. She tries to warn her mother. Before she can, Rebecca is seized from behind. Missy flees into the storm and the mysterious entity breaks Rebecca’s neck.

Once again, a body has been found on the Palmer land. This time, it is Rebecca Palmer. Harney brings Glen in for questioning again. His mind is made up. Harney postulates that Glen caught Rebecca and Jeff making love on the beach and killed them. He has no evidence, circumstantial or otherwise, to back up the charge, but tries to force Glen to confess.

Brad and Elaine invite Glen and his children to stay with them at their house so they don’t have to be alone. That night, another storm moves in. Robby and Missy are distraught over the death of their mother and Robby suggests that they head back down the beach to their own home where they will be more comfortable.

They venture out into the storm and start through the woods adjacent to the beach. Once again, Missy senses the presence of evil around her. She looks around and sees ghostly figures dancing on the beach. Meanwhile, Harney Whalen is there, waiting, with the spirit of his dead grandmother exhorting him to avenge her death on the strangers. Harney attacks Robby.

Glen and the Randalls notice the kids missing. Elaine heads for town for help. Glen and Brad search the beach and the woods. After Elaine finds him, Chip heads for the beach and finds his uncle attacking Robby. He launches himself at his larger uncle and is able to wrest him away from Robby. After a brief struggle, Harney overpowers Chip. He gets up and walks into the ocean, never to be seen again.

This was a good book. That’s all I can say about it. What I like most about John Saul is consistency. He always writes a good book. He never writes bad ones, nor has he written a truly great one. There is no magnum opus or capstone work in John Saul’s library of 36 published titles. With a few exceptions, all rely on the standard Saul construct for a novel with different characters, settings and circumstances.

I’ve said in earlier reviews that Saul doesn’t flesh out his characters any more than is necessary to tell his story and none of the characters in this story are particularly deep. With the exception of Chip, none are introspective. We are left with the motivations and emotions at hand with no backstory.

A stylistic critique I’d level at this Saul work is how he writes from so many points of view. None of the main characters are a mystery to the reader and despite a few red herrings about Indian legends, it’s painfully obvious who the villain is. But being in Harney Whalen’s head was useless text. We were in his head when he was rational. He knew he was having blackouts and was concerned about it. Saul could have shown us that. If Saul needed to be an omniscient narrator, he should have taken us into Harney’s head when he was maniacal.

Saul does do a good job of creating the setting of the remote, unfriendly fishing village on the coast of Washington; constantly beset by storms and cold weather. Perhaps it’s because Saul grew up in Washington that he is able to set the scene so well.

Saul is fun and easy to read. I can breeze through his books in just a few sittings and the stories, while seldom enthralling, are well told and well written.

There was a made for television movie based on this story. To my knowledge, it is the only adaptation of a Saul story for any screen. I have not seen it, but it was apparently not well received by viewers and IMDB.com reviewers.
Posted by Brian Schwartz at 7:13 PM