Book to Movie: Needful Things (1993)
Directed by Fraser Clarke Heston
Screenplay by W.D. Richter
Based on the novel, Needful Things, by Stephen King

In the early and mid 1990s, movies and made for television miniseries based on Stephen King’s works were cranked out in Hollywood the way cars are cranked out in Detroit. Like an assembly line, the end product almost always had a sameness about it that resulted in more than a dozen undistinguished works. Some were awful. Some were entertaining. None were great. Needful Things falls into the category of entertaining, but not great. 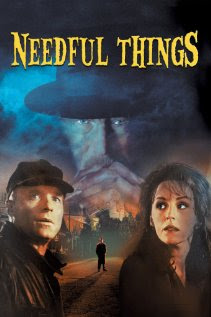 Screenwriter W.D. Richter used King’s story as a guideline to tell a much different tale. The opening scene has Leland Gaunt tooling down a main country road in a stunningly beautiful, vintage Mercedes sedan, arriving in Castle Rock.

The story introduces us to many of the characters quickly. In the first five minutes, Sheriff Pangborn, not widowed, but having moved to Castle Rock years before after a tour of duty with the Pittsburgh police department, proposes to Polly Chambers. We are also introduced to Nettie, Dan Keeton, and Brian Rusk before five minutes have elapsed.

In the book, much of the action was centered around Alan and Polly and their relationship. She harbors a dark secret about her past involving a child who died in an awful tragedy. He's still grieving and guilt ridden over the death of his family. Their relationship is complex, dynamic, and delicate. The movie pushes commitment to the fore without any of that interaction between the two main characters.

As in the book, Brian Rusk is indeed Gaunt’s first customer. In the book, it is a 1956 Sandy Koufax baseball card that Brian covets. In the movie, it is Mickey Mantle. The change makes sense since Mantle’s name is almost universally known while few of the Generation X age group could even identify the team that Koufax played for. Many of Leland Gaunt’s gifts are changed to make them more identifiable for the movie audience.

As King has him do, Leland Gaunt bargains with each customer and extracts a promise of a favor to be delivered later.

King makes a point of never having Pangborn and Gaunt meet face to face. This is because Gaunt is afraid of Pangborn and his “white magic.” In the movie, Gaunt sits down with Pangborn in his shop and has tea, telling the sheriff he is from Akron (which German actor, Max Von Sydow manages to pronounce correctly. American Ed Harris who plays Alan Pangborn later pronounces it AK-RON). This changes the whole dynamic of the story.

To document all of the differences and deviations from King’s original story would be a distracting undertaking. As in the book, many tricks are played and the first two Castle Rock residents to meet their doom are Nettie Cobb and Wilma Jerczyk who die in the Jerczyk home rather than on the streets of Castle Rock.

The conflict between the Catholics and the Baptists over Casino Night is in the movie, but not developed. It is referenced with two or three throwaway lines, but we never see any conflict. This conflict was central to the plot and the conflict around which all other subplots revolved.

Missing is the entry of Ace Merrill, who was to be set against Alan Pangborn. Also eliminated is Polly’s backstory of her child and her belief that Alan has gone looking into that secret. Instead, Pangborn sets it up so Polly finds envelopes full of money aboard the boat that Alan lives on after Gaunt told her that he and Keeton were embezzling from the village. There is also a senseless and needless scene of Gaunt ravishing Polly after she is entranced by him.

The turning point in the movie is the investigation into what happened at the Jerczyk home with Nettie and Wilma. Brian Rusk shows up at the scene and asks to talk to Sheriff Pangborn. When the sheriff comes to talk to him, Brian runs off.

Later, Pangborn finds Brian near the rocky coast. Looking out on the ocean, forlorn. Alan approaches him and finds the Mantle card discarded on the steps leading up to an observation platform. As he approaches Brian, Brian produces a gun – a gun that Leland Gaunt took away from Dan Keeton and gave to Brian. Brian warns Alan to stay out of Needful Things and tells him that Gaunt is not human; he’s a monster. He then shoots himself.

This was a wonderfully written and directed scene and would have worked well had there been any set up for it. But the script provides no hint of the horrible guilt and torment building up inside Brian, nor are we allowed to observe how Brian arrives at his conclusion. This is the primary shortcoming of the movie: the viewer never becomes emotionally vested in the characters or their conflicts because, while King provides tremendous amounts of background and introspection, the script provides no real motivation for any of the characters to hate each other.

After Brian nearly kills himself (we are told he will survive), Alan goes to the Catholic church and talks to the priest, asking him if he believes in the devil. Another good opportunity for developing a central premise for the movie is lost when, instead of talking about the nature of evil and how the devil is the ultimate salesman, the church blows up before they can get down to business. Both Alan and the priest survive. Alan heads for town while the priest heads for the Baptist church to kill the Baptist minister.

Alan arrives to find dozens of people fighting in the streets and widespread looting. Frustrated, he unloads a clip of rounds into the air to get everyone’s attention. Once he has their attention, he makes a sappy speech that ends up sounding like George Bailey from It’s a Wonderful Life, transplanted into a horror movie.

As Alan is speechifying, Gaunt comes out onto the porch of his shop and tells the town he only sold them what they wanted. Caveat Emptor, he tells them. As he and Alan argue, Dan Keeton emerges from Gaunt’s store with dynamite strapped to his chest. After whining and complaining about the persecutors who are persecuting him, he blows up Needful Things with Gaunt still standing on the front porch.

However, Gaunt emerges from the wreckage unscathed. He bids adieu to Castle Rock, telling them that business has been good, but not great, and he must be moving on. He gets into his Mercedes and heads out of town. As he passes by the “Welcome to Castle Rock” sign, his car vanishes, ending the movie.

With all of the noted shortcomings, it wasn’t a tremendously bad film. It had moments of dark comedy and scenes such as the noted interaction between Alan and Brian that were quite good. The cast, many of whom were veterans of other King works dating back to 1979’s ‘Salem’s Lot, lifted the mediocre script with stellar performances. Max Von Sydow was almost as I’d imagined Leland Gaunt long before I saw the movie and his is the best of a bunch of great performances.

Needful Things was probably not a good Stephen King book to make into a movie. The story is simply the closing chapter in an ongoing tale King has been telling about this strange little town since the publication of The Dead Zone in 1979. The reader already knows the town and many of its people. Readers are already emotionally vested in Castle Rock before they pick up the novel.

The movie didn’t emotionally vest the viewer. The script does nothing to make us care about these people. King is careful to make sure that each of the characters – even the less noble like the drunk Hugh Priest or embezzling Dan Keaton – are complex with good and bad in each of them. With just two hours of screen time and many characters to work with, it was simply impossible to develop the characters to that extent. The complexity of the characters is an essential element in making Needful Things a good book. Without that, the story is flat.

Needful Things is better suited for a two or three episode miniseries. In such miniseries as It, The Stand, and Storm of the Century, characters are developed to their maximum potential in the visual medium. It could have been so with Needful Things. Instead of a stellar television miniseries, Needful Things is an incredibly average feature film.

Posted by Brian Schwartz at 2:04 AM