Many consider the fifth and final season of Rod Serling’s innovative series to have been uneven. Serling himself said he was beyond being able to discern between good and bad scripts anymore. Certainly there were some bad episodes that final season. But there were a couple masterpieces in there as well. One of them was Richard Matheson’s adaptation of his own short story, Nightmare at 20,000 Feet.

The teleplay is almost a straight retelling of the short story as Matheson had written it more than a decade prior. The primary change was the addition of a wife with which Bob Wilson can interact. In the story, Wilson directs much of his terror inward with interior dialogue. The wife gave him someone with whom he could verbally interact with which was necessary for the story to work in the visual medium. 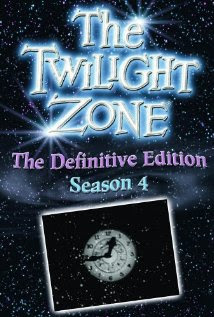 In Mathesons’ teleplay, Wilson and his wife board the plane. We learn he was recently released from a mental asylum after a six month stay. He’s still nervous and shaky. He’s also dreadfully afraid of flying.

Shortly after takeoff, he sees the creature on the wing (which the costume department outfitted to look like a morbidly obese teddy bear). He tells his wife and the flight attendants, none of which are able to see the creature who always jumps out of site just before they can see.

Finally, as he watches the creature start to dismantle the engines, Wilson decides he has to act. He steals a pistol from a sleeping police officer. The then opens the emergency hatch and begins shooting at the creature. He is eventually pulled in by the flight crew, confident that he hit the creature and saved the flight.

In the final scene, we see poor Bob Wilson, in a straitjacket, being loaded into an ambulance. He is calm and at peace because he knows he just saved his own life and the life of all the plane’s passengers.

This ranks as one of the most critically acclaimed and universally recognized of all the Twilight Zone episodes. A large part of that is Matheson’s brilliant script which plays into a very real fear suffered by hundreds of thousands of people. But I think part of the acclaim the episode draws comes from William Shatner’s performance.

Criticisms of William Shatner’s clipped dialogue deliver and penchant for overacting are as old as Shatner’s career itself which spans almost 60 years. Much of that criticism is warranted although a lot of it can be blamed on ham handed directing of the 1960s and 1970s.

Shatner’s maniacal, over the top acting style are precisely what the role of Bob Wilson called for. His eyes wide, his face fixed in a rictus of terror, Shatner delivers what might well be his one true tour de force of acting.

Also credit director, Richard Donner for building tension in the story. By the time Donner directed this episode, he'd already built an impressive resume in television directing with Combat, Have Gun, Will Travel, and The Rifleman. This was his first foray into horror/sci-fi and this was by far his best television work. He directed other fifth season episodes -- most of which were forgettable. Given a good script and a good leading man, Donner showed that he could direct outside of westerns and action shows.

Posted by Brian Schwartz at 6:32 PM