She: A Tale of Adventure by Henry Rider Haggard

She: A Tale of Adventure
By Henry Rider Haggard
Copyright 1886

If A Princess of Mars serves as an archetype for science fiction, H. Rider Haggard’s tale of a omnipotent woman ruling over a tribe of primitive people can be seen as an archetype for fantasy literature that inspired the likes of L. Frank Baum, C.S. Lewis, and even J.R.R. Tolkein.

In his novel, Haggard tells the tale of a college professor and his young ward as they venture into Africa n search of a lost race of people and the white queen who rules them. The narrator of the tale, Horace Holly, is a college professor of dreadful countenance. So ugly is he that he has given up all hope of ever finding love. 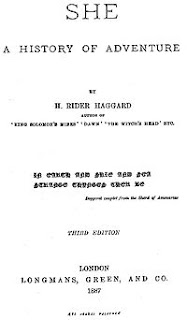 In his charge is left a five year old child, Leo Vincey, the son of a colleague at the university. Holly promises to raise the child as his own. His father leaves with Holly a box that is to be opened when the boy reaches 25 years of age. In it, according to Leo’s father, are clues as to his heritage.

Holly raises the boy and he grows up to be a fine looking young man with a head adorned with beautiful blond curls. On his 25th birthday, Leo and Holly open the box and finds ancient relics inside. Decrypting the writings on the relics, he and Holly learn of an ancient race of people living in remote Africa. These people are ruled over by a powerful deity known as She Who Must Be Obeyed. According to what Holly can discern, one of Leo’s remote ancestors was her lover.

Leo and Holly, along with their man servant, Job, decide to set out for Africa in search of the boy’s lost heritage. They hire a boat and sale up the eastern coast. The boat is lost in a storm and Leo, Holly, and Job, along with a crew member survive to get ashore.

They venture forth into the land, following a river. They are soon captured by a race of people, African, but who speak a distorted form of Arabic. Holly and Leo are able to communicate with them. The leader of the people, Billali, tells them that their queen, She Who Must Be Obeyed, instructed that if white men showed up in her land, they were to be treated as guests and not harmed.

Billali takes the group back to their camp. The people are primitive hunters and gatherers who live in caves carved out by ancient volcanoes. Billali leaves them to report to She that white men have arrived in the land. The four men are left alone with the native people.

At a dinner, one of the women of the tribe, a girl named Ustane, falls for Leo and claims him as her own. Another woman tries to force herself upon Job to claim him, but Job spurns her. Later, angry that Job has refused the woman, violating their customs, the natives come for the group, determined to take the surviving crew member and subject him to a ritual known as “hotpotting” before cooking and eating him. The group manages to fend off the attack just as Billali arrives back at camp to save them, but not before the crewman is killed and Leo wounded.

Billali says he is to take them to see the queen. They set forth on the journey to She’s lair. As they travel, Leo grows sick from his wound. Ustane has accompanied the group to care for Leo. After a day’s journey, they arrive at a dormant volcano where She dwells. They are placed in a cavern where Leo can rest and Ustane can tend to his wounds. Holly is escorted to meet She.

Holly is taken before the queen, She Who Must Be Obeyed to her people. Her proper name is Ayesha. She is a white woman who is veiled to hide her face. Holly asks to see her. She warns him that she is so beautiful that the minds of men are clouded and confused when she reveals herself. Holly, who has banished all thoughts of female attraction from his mind, is confident he can look upon her without being stricken. Ayesha reveals herself and Holly is immediately enraptured.

Ayesha tells him that she has ruled these primitive people, for whom she cares little, for nearly 2,000 years. She is awaiting the return of her beloved, whom she killed in a fit of pique eons before. Holly tells her that he has a companion that is ill and needs to be healed. Ayesha says she will see to Leo tomorrow and dismisses Holly.

Holly, his mind troubled by his infatuation with the queen, cannot sleep. He wanders through the caverns and stumbles into a small cave that looks into Ayesha’s antechamber. There, believing herself to be alone, She is debating with herself, hoping against hope that the young stranger is the reincarnation of her lover, Kallikrates. Holly is amazed to see this goddess-like woman so mortally distraught.

The next day, She goes to Leo and heals him. When she finds that he and Ustane are in love, She orders Ustane to leave. Ustane refuses, claiming Leo as her own under their customs. Leo is smitten with her as well. Ayesha wants to kill Ustane, but fears alienating Leo, who she is sure is Kallikrates come back to her. Instead, she touches Ustane’s hair, placing three white streaks in it, marking her as a warning to her and others that she is indeed She Who Must Be Obeyed.

Leo, Holly, and Job are then invited to a ceremony where Ayesha pronounces judgment on the cannibals who tried to kill them. Ayesha sentences them to death by torture. She then takes them on a tour of the caverns she inhabits which are mostly catacombs filled with ancient dead. She tells them of the lost civilization that once dwelled there.

She asks what has become of the world since she sequestered herself in the caves. Holly tells her of the birth of Christ and the rise of Christianity. Ayesha is intrigued by this Jewish deity who rose in influence during her absence. She is eager to be reconnected with her Kallikrates and leave behind the land she has inhabited since the days before Christ. Holly fears what will happen to civilization should Ayesha, with her supernatural powers, reach London. Yet, he is unable to resist her wishes.

Leo, having seen Ayesha’s stunning countenance, is now smitten with her as well and willing to follow her wherever she will lead them. After a ceremony where those who tried to kill them are slain, she invites them to follow her to a mysterious cavern where Ayesha says she stood before a flame and gained immortality so she could wait for Kallikrate’s return. They set forth to find the flame.

Before they can leave, however, Ustane returns, determined to fight for Leo. Ayesha strikes her down, after having given her one more chance to leave. Under the spell of She, Leo is hardly concerned.

They journey through the treacherous caverns and eventually reach the flame that jets forth from the rock. Here it is, Ayesha tells Leo, that he too can become immortal and join her as is his destiny. Leo is frightened and will not enter the flame. Ayesha, unafraid, steps into the pillar of fire, just as she did centuries before, to show that the flames do not harm mortal flesh.

However, the second immersion in the flame proves tragic for Ayesha, for the second immersion undoes the effect. The years quickly catch up with her. As she withers into an old woman, she promises that she will return. She falls dead and is desiccated in a matter of seconds. Poor Job drops dead of fright. Leo and Holly, the spell now broken, want nothing more than to return to England.

The book concludes with Holly, sitting in his comfortable study, putting the final touches on his manuscript recounting their adventure. He is still uncertain of the truth of it. Was Leo the reincarnation of Kallikrates as Ayesha believed? Or was it just a hereditary resemblance? Holly informs the reader that it is up to him to decide.

This book was a selection by my book club which has now read two archetype novels in a row. Unfortunately, I was not able to attend the meeting where the book was discussed to hear others’ thoughts and insights. I am told that it was universally enjoyed by the group.

I enjoyed She a great deal. The writing is antiquated and old fashioned. Much like Edgar Rice Burroughs’ writing, Haggard has long pauses in the action to explain the anthropology of the foreign culture. While this can be distracting and would not be accepted by modern editors, one must remember that the readers of that day had much less exposure to foreign cultures. They had not our means of mass communications and awareness of other people. Scenes that are easy for the modern reader to envision had to be carefully explained and developed by these pioneers of genre fiction.

For its time, She is a well paced novel. Despite the anthropological pauses and long debates and discussions of ancient and modern theology and philosophy, the story contains plenty of action and moves quickly. Haggard is much more apt to narrate the action sequences than was Burroughs who was wont to skip over them to tell the reader the final results.

Henry Rider Haggard wrote several novels, including King Solomon’s Mines and Allan Quartermain. However, She stands as his crowning work, having invented the “Lost World” genre of fiction that is so expansive today.

Although the setting for She is Africa, it was apparently inspired by the time Haggard spent in South America as a government official. Written in an age of British imperialism, Haggard’s conceit and mild contempt for other races comes through in his text.

The book is one of the best selling works of fiction of all time. Despite being more than 120 years old, it has never been out of print and has inspired at least two film interpretations and several movies based loosely upon it. Like Burroughs, Haggard first published his work as serialized stories within a magazine. She appeared in The Graphic magazine in four installments between October 1886 and January 1887.

Although H. Rider Haggard is not as well known today as Edgar Rice Burroughs, his work is as influential and in some ways superior. Burroughs enjoys a following today mostly because of the pop culture icon, Tarzan of the Apes and the movies based on his Tarzan novels. Haggard created no such popular culture icon. But that does not diminish the importance of She as an archetype for fantasy or Haggard’s place among the creators of genre fiction.

Posted by Brian Schwartz at 5:11 PM