Book to Movie: She (1935)
Screenplay by Ruth Rose
Directed by Lansing C. Holden
Based on the novel She: A Story of Adventure by H.Rider Haggard

Early silent films were made of Haggard’s influential novel about an immortal queen inhabiting the jungles of Africa. In 1935, a spectacular adaptation was made, transplanting the African adventure to the Arctic. 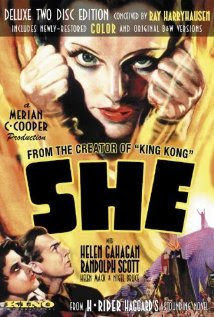 The story opens with Leo’s uncle dying in Holly’s parlor, telling Holly of what he has learned of this ancient queen that loved and slew his ancestor. Leo’s uncle also talks about a fire that allegedly provides those who are subjected to it immortality. Leo (portrayed by Randolph Scott) arrives just as his uncle is dying and hears the legend. Leo and Holly decide to set out to find this fountain of youth.

They travel to Siberia where they meet a man who speaks remarkable English to serve as their guide. He has a young daughter that accompanies them. Job does not appear in the movie. The daughter, named Tanya quickly develops an infatuation with Leo.

The guide is killed when he gets greedy and starts to dig for gold clutched in the hand of Leo’s slain ancestor, frozen in a block of ice. His pounding causes an avalanche that kills him. The rest of the party continues on in the freezing cold.

The tale then picks up the book some as the party is discovered by the natives of the frozen tundra. They are guided to caves by the High Priest (I don’t believe he was ever named as Billali). They are told to wait there whilst he travels to the temple of She Who Must Be Obeyed to tell her of the arrival of white men.

Just as in the book, the hotpot is prepared and the natives attack the party with the purpose of putting the pot on Holly’s head. They fight them off with guns until the high priest makes a timely return and puts an end to the mayhem, but not before Leo is wounded. He tells them that they are to be taken to She.

In the book, She dwelt in the caves and caverns carved out by a volcano. In this movie, she dwells in an art deco style temple which is spectacularly constructed by the standards of movies of the 1930s. She greets the entire party from behind a shroud of mist.

She learns that there is an injured member of the party and promises to heal him the next day. When Ayesha (played by Helen Gahagan in her only screen role) sees him and sees Tanya tending to him, she curses herself for having waited, now sure that Leo is Kallikrates for whom she has waited so long.

She tells Tanya that she is subject to execution for having fallen in love with Leo, but she stays the sentence because Tanya has no idea that she violated an edict from She. Leo is smitten with Ayesha and takes a place at her side, much to Tanya’s dismay. As they sit, Ayesha says she is going to pronounce judgment on the natives that injured him despite her orders that no white men who entered the camp were to be harmed.

When Ayesha sentences them to death, Leo is appalled and turns on Ayesha. Leo, Holly, and Tanya make their escape, shooting their way out of the temple. They follow a path that leads them to a room with a giant flame jutting forth from the floor. Ayesha and her priest appear in the room. Ayesha tells them that they have found her secret temple and the flame that provides eternal life.

Ayesha invites Leo to step into the flame and gain immortality. As in the book, Leo is afraid, so Ayesha volunteers to step in to prove it is harmless. She begins to age, although she doesn’t realize it at first as she proclaims her undying love for Kallikrates. But, as she stands in the flames, she grows older and older, into infirmity and eventually crumbles. Leo and Tanya embrace and the party prepares to flee, leaving the high priest behind to mourn his dead goddess.

The book ends in the warm parlor where it began. Leo and Tanya have wed. Holly is putting the final touches on his narrative account of the adventure. They apparently live happily ever after.

This was an expensive and high quality production for its era. The art deco temple and its environs are stunningly beautiful and well constructed. Randolph Scott, the veteran of so many feature and B-westerns, is outstanding in his role as Leo. The script had a story that was easy to follow and there were no plot holes.

The story was originally to be shot in color. It is a tremendous shame that it was not because it might have rivaled the Wizard of Oz in its beauty. Alas, only those who were on the set know how colorful it really was, so we’ll never know for sure.

As I noted, this was the only movie ever made by actress Helen Gahagan. While she is not well known in movie lore, she is a figure in political history. She was elected to Congress in 1944 (by then she had married and her name was Helen Gahagan Douglas). She served three terms in Congress and had an affair with fellow congressman, Lyndon Johnson.

She ran for the U.S. Senate seat from California in 1950 against Congressman Richard Nixon. It was an ugly campaign in which Nixon branded her “The Pink Lady” by claiming that she was part of the Hollywood crowd that had communist sympathies. She responded by branding Nixon, “Tricky Dick.” Nixon ultimately won the contest. Gahagan disappeared from politics and never acted again.

Posted by Brian Schwartz at 6:29 PM