Trilogy of Terror was a made for television movie that aired on ABC in March 1975. It featured three stories, each authored by Richard Matheson. Each story bore the name of its female protagonist. William Nolan – known best for his scripts for Logan’s Run and Burnt Offerings adapted two of Matheson’s stories. The final (and best) script was penned by Matheson himself. All three segments star Karen Black. 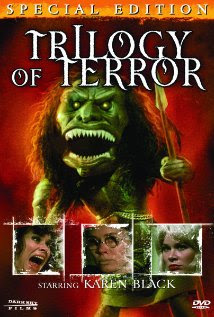 The first story is entitled, Julie and is based on the short story, The Likeness of Julie. In the Matheson story, the nasty college student falls for a plain-Jane student who sits behind him in literature class. In this screen version, it is the lit professor for whom our evil antagonist falls. Nolan sets the misogynistic tone right away when Chad and his buddy are sitting on the campus, discussing how ugly all of the female students are. When Julie, the lit professor walks by in her brown wool sweater and wool skirt cut far below the knees, Chad just has to know what flesh lies beneath all that wool.

As in the story, he takes her to a drive in theater (where they are watching the Matheson film, The Night Stalker) and drugs her. Being made for television, we are left to our imaginations to recreate what happens in the cheap motel room later.

Chad’s an amateur photographer and takes pictures of Julie. Again, our imaginations are having to do the work here. He demands that Julie meet him. They drive out into the country in Chad’s stunningly beautiful 1972 Mercury Cougar XR7 Convertible where Chad shows her the photos and informs her that she will gratify his every demand.

So it goes for awhile. Chad demands and Julie submits. Her roommate is worried about her hours and her morose disposition. Julie assures her it’s nothing to worry about.

One evening, Julie is at Chad’s and without notice, her mousy countenance changes and her appearance takes on a menacing quality. She informs Chad it’s over. She’s done. She’s done because she’s bored. Chad tells her it’s not over until he says it is, believing he’s still got her by the short hairs. Julie tells him the whole affair was never his idea. None of it was. Chad perishes when the chemicals in his developing studio catch fire.

The next day, a student failing literature arrives at Julie’s house. He needs help. Julie is willing to oblige.

This was well scripted and Black takes the “turn” in magnificent fashion which I’m sure was stunning for television audiences in 1975 who’d not read the story. With Karen Black covered in all that wool, I couldn’t keep my eyes off of Chad’s stunning car. What a beauty she was!

Millicent and Therese are sisters who live together in a luxurious mansion left to them by their father. Millicent, an uptight, prudish woman, pesters the family doctor with complaints about her coquettish sister, Therese. Therese seduces men. She leaves her cigarettes burning in the house, their tips resplendent with her deep red lipstick. Millicent wants the doctor to something about Therese.

One of Therese’s “suitors” arrives at the home and encounters Millicent who is there to rant and rave about her sister’s moral depravity until the poor guy leaves.

The doctor arrives and finds Therese in the home. She tries to seduce him, but he’s not having it. He talks to Therese, trying to draw her out, but Therese has but one thing on her mind. The doctor leaves.

When the doctor does nothing to help her, Millicent decides it’s time to take matters into her own hands. Gathering the necessary materials, she constructs a voodoo doll of Therese and plans to kill her.

When the doctor returns to the house, he finds Therese dead. Millicent has fled the scene, or so it would seem. When the authorities arrive, the doctor explains that the prudish Millicent is actually Therese. Therese slept with her father and killed her mother. She then developed a dual personality disorder, creating the prudish Millicent to cope with the prurient Therese.

This segment was not good at all. I stop short of saying it was awful, because there was nothing in it that made you groan with bemusement. But the story’s twist was obvious about five minutes in and there was nothing particularly horrifying about it. Black’s portrayal of Millicent was over the top and she seemed to be phoning in the part of Therese.

I’ve not read the short story upon which this segment was based. But I have to believe it was more textured and nuanced than the made for television segment.

The third and final segment is entitled, Amelia and is universally regarded as the best of the three. Black plays a woman stalked in her New York apartment by a Zuni Fetish doll. It is based on the Matheson story, Prey.

Amelia buys her boyfriend a Zuni Fetish doll for his birthday. In the story, it was because he loved to hunt. In the movie, it’s because he’s an anthropology professor. The chain that keeps the doll’s wild hunting spirit at bay comes off and the doll, with his tiny spear and Amelia’s kitchen knives, pursues Amelia through the apartment and proceeds to cut her up just a little bit at a time.

I won’t choreograph the entire chase here. Black stands alone in a one woman performance paired with a doll and at least one puppet.

We think Amelia has won the contest when we hear her call her domineering mother and invite her over in the sweetest voice possible. We know differently when we see Amelia put down the phone, pick up the knife, and crouch in a stalking position inside the front door, rhythmically pounding the knife into the floor and swaying back and forth to drums only she can hear. And the smile! The haunting, disturbing smile on Black’s face in the end is spine tingling!

Amelia reminds me very much of the episode of the The Twilight Zone, The Invaders where Agnes Moorehead delivers a stellar, one woman performance as she fights off tiny invaders from another planet. She does it without a single line of dialogue. Black’s performance doesn’t quite rise to that level, and there is dialogue to drive the story, but it is in the same ballpark and that is high praise.

Apparently, the movie of the week was supposed to be a vehicle through which Matheson and Nolan hoped to launch a television series. Matheson had worked on concept development (although he did not contribute scripts) to a horror anthology show originally entitled Ghost Story and renamed Circle of Fear in its second and final season. The show, which featured some great scripts and acting did not survive. I remember it terrified me as a child and its scripts were hard core horror (at least for television audiences of the 1970s). It terrified me as a child. Alas, it did not survive and, along with Night Gallery, was canceled in 1973, leaving a void that perhaps Matheson and Nolan hoped to fill with slightly tamer, more ponderous fare.

Posted by Brian Schwartz at 6:30 PM