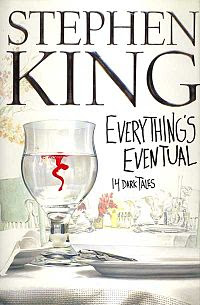 Autopsy Room Four
A wealthy stock broker regains consciousness on an autopsy room table. He can’t move and apparently those who are preparing to carve him up aren’t aware he’s alive and breathing. When the pathologist examines a scar on the inside of his thigh, he finds a way to alert them.

This story is entirely interior dialogue the man has with himself about the fear of being cut open while alive and devising a means of letting those around him know he’s alive. It is a clever bit of storytelling on King’s part and it’s a great story. It was inspired by an episode of Alfred Hitchcock Presents where a man in a wrecked car must attract the attention of is rescuers who think him dead.

This story was made into an episode of the TNT miniseries, Nightmares and Dreamscapes. It was originally published in a limited edition anthology of King stories entitled, Six Stories.

The Man in the Black Suit
Set in 1916, a young boy goes fishing at his favorite trout stream. He is approached by a man in a dark suit and wing tip shoes. The man tells him that his mother has died. The boy flees toward home in terror.

All That You Love Will be Carried Away
A traveling salesman checks into a rural motel with plans to kill himself. He calls home and leaves reminders of several chores to be completed by his wife. He then contemplates what to do with a small notebook in which he’s collected numerous limericks and rest stop graffiti. There might be a book in it. He must decide whether to blow his brains out or stick around for the sake of that little notebook.

This is straight, mainstream fiction with a cloying poignancy. It’s also a well told tale with real bits of roadside graffiti King picked up in his own travels. The ambiguity of the main character, the reasons for his depression, and his ultimate fate make the story even better.

The Death of Jack Hamilton
This is a fictional account of the death of a real life member of the Dillinger Gang. It is a first person narrative told by Homer Van Meter, a real person who was a member of the Dillinger gang. Jack Hamilton gets shot as Dillinger and his crew flee from the feds. The crew ends up in Chicago where they lay up in a boarding house, hiding. Hamilton’s wound festers and he lapses into delirium. Van Meter provides graphic detail of Hamilton’s slow slide toward oblivion.

As one progresses through Everything’s Eventual, it’s easy to see that Stephen King has matured as a short story teller as well as a novelist. His early collections contained short stories, usually dealing with the supernatural or death. Nightmares and Dreamscapes was a mix of supernatural and mainstream stories, often over written and bloated. The Death of Jack Hamilton is a gripping, graphic account of the death of a member of one of the most notorious gangs of the Depression era. King shows that he can write historical fictional as well as tales of the supernatural.

In the Death Room
The story tells the tale of a New York Timesreporter held captive in a torture room of a South American country. He’s being interrogated about his ties to communist insurgents. He is tortured some before he manages to escape.

The story’s not-at-all veiled subtext is how we hear and grasp what we want to believe, even when it flies in the face off all circumstances presented before us. Among King’s short works, it ranks as average.

The Little Sisters of Eluria
This story is an interlude during Roland Deschain’s pursuit of Walter across the desert in the first volume of The Dark Tower: The Gunslinger. Roland wanders into a town where all of the people have gone. He is accosted by mutants and beaten badly. He awakens in what appears to be a hospital tended by demi-human nurses and insects that heal the wounded. There are only two other patients beside Roland in the makeshift hospital. The man in the bunk next to him says that there were more than twenty a week ago, but they disappeared one by one. One night, while feigning sleep, Roland learns his “nurses’” secret nature and schemes to escape. He earns the affections of one of his keepers to help him make it out.

King is at his best when writing about the Dark Tower. This story was much more engaging and entertaining than the book that surrounds its events. It was a pleasure to visit Roland’s world again, if only for a brief time. King tells the reader that the next installment of the Dark Tower, entitled, The Wolves of the Calla, is done and ready to be published – all 900 pages!

Everything’s Eventual
A 19 year old high school dropout has a special talent for knowing how to write just the right kind of letter – letters that send people to their graves. His talent is noticed by an international organization that uses such talents to improve the world. The young man is set up with his own home, computer, and cash flow. All he needs to do to stay on easy street is to write these letters or emails to targets which are identified for him. It’s easy for awhile, until he reads the story of one of his victims. That gets him started researching what he has wrought.

This is an interesting first person character study. Certainly some words could have been pared to make it more taught, but the premise works and the main character is sympathetic.

L.T.’s Theory of Pets
L.T. is a meat packer that occasionally regales coworkers with the tale of how his marriage broke up over the issue of pets. His wife bought him a dog that hated him, but loved her. He bought her a cat that hated her, but loved him. Eventually L.T.’s wife leaves him, not out of anger, but out of love because they are no longer compatible. The narrator of the story invites L.T. to dinner at his house. After dinner, he learns L.T.’s true feelings on the subject of life, marriage, and pets. The narrator examines his own marriage.

King says this is his favorite story out of the book and, if he’s asked to read his own work in public, he reads this story. I found it exceptionally average. It’s mainstream fiction which I like less than horror and at the end of the story, I felt no differently about L.T., his wife, or the narrator.

The Road Virus Heads North
A horror writer stops by a yard sale and picks up a disturbing painting of an evil looking man driving a car. On his way home, he notices that the painting has changed. The car is moving north behind him. He decides to get rid of it, tossing it over a hill at a roadside rest stop. But that doesn’t stop the unrelenting driver of that ugly muscle car from making his way north, leaving a few victims in his path.

This was vintage Stephen King in his old comfort zone. The main character is a writer, subject to the same torments and irritations King himself endures. The story is straightforward horror with an element of pursuit and lots of gore. Great stuff. Even after having “matured,” King shows he’s still able to crank out a tale of terror.

This story was made into an episode of the TNT miniseries Nightmares and Dreamscapes and starred Tom Berenger.

Lunch at the Gotham Café
A New York stockbroker agrees to meet his soon to be ex wife and her attorney at an upscale New York café to discuss short term arrangements for their separation. When the stockbroker arrives, he’s disconcerted by the Maitre’ De’s odd behavior, calling his umbrella a dog and ranting that he’s not allowed to have a dog. He sits down to talk with his ex wife and her counsel when the Maitre De decides it’s time to take care of that dog and its owner once and for all.

This story is a gore fest, something King didn’t write often, but does it well here. The Maitre De is a disconcerting character whose wild behavior is sudden and violent. The main character is made more sympathetic because his ex wife is not a nice person, even after he saves her life.

That Feeling, You can Only Say What it is in French
A woman is cruising along a country road with her husband, on their way to a Florida island for their second honeymoon. Road signs, things her husband, says, and songs on the radio all give her a sense of déjà vu. All these things she associates with the name, “Floyd.” She wakes with a start on a private plane which is taking her and her husband to Florida. They arrive, get into a car, and start the drive. Again, déjà vu. Again, the name “Floyd.” She awakens on the plane. . .

King says Hell is repetition. Give King credit for not tipping his hand on the twist to this story because it’s a pretty good twist at the end of a pretty good story.

1408
A writer who engages in debunking “true” ghost stories prepares to spend the night in room 1408 of the Dolphin Hotel in New York. The manager tries to talk him out of it, but he’s determined. He lasts just 70 minutes.

This is one of my favorite King short works. I remember feeling disconcerted and uncomfortable reading it and incredibly satisfied when I finished it. King is known for his story telling and this story is not original, as he admits. But King the wordsmith shines through and takes the tired premise of a haunted hotel and literally wills it into something great just through his use of the language.

This story was made into a movie in 2007 that starred John Cusack.

Riding the Bullet
A college kid gets a call that his single mother has suffered a stroke and is in the hospital. He hitch hikes across Maine to see her. He gets picked up by an unusual driver who makes him choose – his life or his mother’s.

King remarks that this story, like the short story Gramma in Skeleton Crew, is reminiscent of his own mother’s passing. I had a similar experience except I got the call on my way to a friend’s house. The story was poignant for me.

Riding the Bullet was made into a straight to video movie in 2004.

Luckey Quarter
A Nevada hotel housekeeper gets a quarter for a tip from a patron. With it is a note from the former room tenant, “This is a luckey quarter.” She’s bitter and angry because her daughter needs braces and her son can’t have the electronic toys that all the other kids have. She takes the quarter and puts it in a slot machine. Soon, she’s on a roll.

King left the story order of this book to a draw of the cards. The cards were not “luckey” for King because he ended a fine collection of short stories with its weakest entry. The story is not bad or ridiculous; just dull.

Posted by Brian Schwartz at 1:29 AM