Book to Movie: Carrie (2002)
Teleplay by Brian Fuller
Directed by David Carson
Based on the novel Carrie by Stephen King

In 2002, the brain trust at NBC decided to remake the 1976 classic, Carrie as a springboard for a potential television series. The result was uneven with some decent acting, but a horrible rewrite of King’s story. 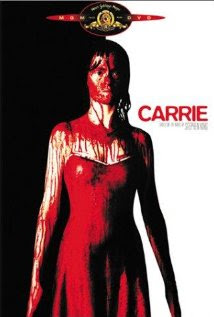 The movie opens with the scene that Brian DePalma elected to leave out of his movie – the scene with the rocks bombarding the White home as young Carrie throws her temper tantrum. The movie then proceeds with Carrie (portrayed by Angela Bettis) having her first period and going hysterical.

The primary difference between the DePalma movie and the Carson film is that Carson tries to retain some of the chapter breaks that King used with his government inquiries and book excerpts. The scenes are broken by police interviews with Sue Snell and a couple others. This is the movie’s first stumbling point.

They make Sue Snell, confused adolescent, into some street savvy woman who is not disturbed by what has happened to her classmates. She defies the police with half truths and quips. The character of Sue Snell is destroyed in Carson’s movie. Sue Snell’s conflict between fitting in with her classmates and wanting to make amends to Carrie was central to the story. Fuller and Carson wiped it out.

The movie follows King’s book closely for awhile before deviating to help set up the twist at the end. There is an encounter at a department store where Sue helps Carrie choose lipstick. They are obviously trying to build a rapport between the two.

I like the introduction of Chris Hargensen’s father and his bullying tactics into the story. If there was one thing that Fuller did well, it was rewriting this scene back into the story where DePalma left it out.

The prom scene follows King’s story and the original movie. Fuller then moves toward King’s original ending with Carrie laying waste to the entire town before returning home to mother. The scene at home is where we get our clue that something different than King’s vision is going to unfold.

Carrie’s mom is not able to stab Carrie. Just like in the book, Carrie uses telekinesis to stop her mother’s heart. She then sends out some sort of mental message to Sue Snell who stops by to pick up Carrie. Sue, who just lost her boyfriend and most of her friends, is going to take Carrie to Florida where she will live under a new identity.

Where the movie stayed with King’s story, it was well written and well shot. No one could envy Bettis for having to reprise the role that Sissy Spacek defined in movie lore, but she holds her own. Where Spacek played the part mousy, Bettis played it dark. Give Bettis credit for succeeding in making the role her own.

The rest of the cast was not so good. Where Piper Laurie played Margaret White over the top, Patricia Clarkson tried for brooding and understated. She only succeeded in making the character boring. Kandyse McClure does what she can with the role of Sue Snell, but it is so badly written that it cannot be salvaged.


Tobias Mehler is no Greatest American Hero, but he comes across as genuinely likeable and kind. The writers left his part intact. If you’ve seen the television show, Lost, then you know how hard it is to see Emilie de Ravin as the wicked Chris Hargensen. De Raven does the best she could, but the writers reduce Hargensen to a caricature of the bully bad girl.

The movie was made to launch a television series where Carrie would run a secret operation in Florida to help other telekinetic teens cope with their powers. They were hoping to recreate some of the success generated by the television series, The Dead Zone based on the character Johnny Smith from that book. But the movie remake did not attract an audience and the project was scrapped.

It should please fans of King’s work that it did. Carrie White is one of King’s most famous and iconic characters. Her climatic demise was a fitting end for this movie and literary creature of such renown. To redefine her with new adventures while running a halfway house would have destroyed that iconic stature.

I would recommend that all but diehard King fans skip this movie. It’s not in the same ballpark with DePalma’s classic film. King fans should study it with cold detachment. There are some interesting twists put on some of the characters an in a few rare instances, Carson’s film recreates the novel better than DePalma. But don’t count on enjoying it as a movie. The foolish ending and the destruction of Sue Snell’s character as envisioned by King ruin it as a film.