Richard Thomas plays the leading role which calls for him to lie motionless on a table for most of the episode while providing tension building voice over as pathologists prepare to carve him up while he was still alive. 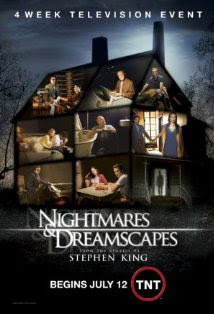 The short story is almost entirely interior dialogue by Howard Cotrell, a stockbroker who seems to have had a heart attack and died on the golf course. In the television version, we open the same way. Contrell is laid out on an autopsy table. Two pathologist and an obnoxious lab assistant cut off Cotrell’s clothes and begin the physical examination of his body before preparing the “Y” incision to open up his innards.

Thomas does his voiceover bit, screaming inside his mind while his body is unceremoniously tossed and turned. He knows that eventually, the scalpel and rib cutter are coming. This is all in the story.

Smith adds to King’s story by taking us to the moment that Cotrell hit his golf ball into the rough and is bitten by a snake King calls a Peruvian Boomslang. The venom paralyzes the victim and gives the appearance of death. An elderly doctor playing in the foursome behind him pronounces him dead on the course.

We also get a taste of Cotrell’s backstory which Smith weaves well into King’s tale. Cotrell was wounded in Vietnam when an anti-personnel mine tore up his crotch. Smith has Cotrell recall a romantic moment he shared with his wife that ended in his failure to perform. We learn that this sometimes happens to him because of Mr. Johnson’s war.

The two pathologists continue to poke and prod Cotrell’s body while Cotrell’s fear builds. They share a romantic moment over him and he’s forced to look on while waiting to be carved up alive.

In another scene added by Smith, Cotrell’s wife arrives at the hospital and wants to see her husband. About that same time, his golf bag is unloaded from the ambulance that transported him. The obnoxious orderly, Rusty, and another orderly get into an elevator with the golf bag. Rusty wants to steal the golf clubs, figuring that Cotrell won’t miss them. As he’s admiring them, a snake jumps out and bites the guy he’s riding with. Rusty subdues the snake with a golf club. Obnoxious or not, Rusty is determined to get to autopsy room four and stop them from carving up what he now knows is a paralyzed, but very alive man.

Cotrell’s wife is just as anxious to get there and makes her way past security to pathology. Meanwhile, the junior pathologist prepares the bone saw for cutting when the orderly and the wife burst into the room. The orderly tells them about the snake and a careful examination of Cotrell’s ankle reveals the bite. He is administered antivenin and comes out of his paralysis to the hugs of his wife.

King’s original story of course had Cotrell having an erection as the female pathologist probed his genitalia, examining his war wounds. Smith’s script cleaned it up some for television.

King’s story was tense. Smith’s story was black humor. King’s story worked well on the printed page. Smith’s story worked well on television. Forty four minutes of Richard Thomas doing voiceover while the pathologists did their thing would have been boring. Voiceover alone would not been enough to stimulate a television audience. King’s story alone would not have been enough to interest a television audience. Credit Smith for changing the tone ever so slightly and making this a fun episode to watch.

For my generation, it’s going to be impossible to see Richard Thomas as anybody but John Boy Walton. Although The Waltons does not stand the test of time and is not aired today, John Boy Walton remains iconic. I’d like to have seen someone less likeable on that autopsy table.

April Smith hit the mark on this episode because she’s a veteran of television writing. She started with that great seventies television show, James at 16. She also wrote several episodes of Lou Grant and Cagney and Lacey.

Mikael Salomon gets credit for not lousing it up. He had a good story, and good script, and a good cast. He made a good episode of Nightmares and Dreamscapes. Salomon also directed the 2004 remake of ‘Salem’s Lot, giving him some experience in directing King’s work.

It would seem that experience paid dividends. Too many directors want to tinker with the story too much. Salomon directed an updated version of 'Salem's Lot, but he did not lead the characters astray from King's original development of them. He exhibited the same wisdom in his installment of the TNT miniseries.

Posted by Brian Schwartz at 5:30 PM