Clayton Blaisdell, Jr. is a studious and large boy living with his alcoholic father in Maine. One day, Clayton annoys his father who throws him down the steps not once, not twice, but three times, giving the boy permanent brain damage and a large dent in his skull. Dad went to prison and young Clayton (“Blaze” to his friends) went to an orphanage. Blaze was no longer studious. Brain damage left him with marginal intelligence. 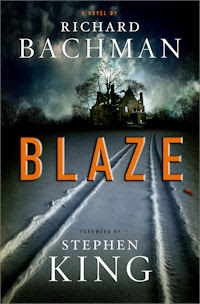 Flash forward many years later, and Blaze is a small time con artist on his own since the recent death of his pal, George Rackley who was the brains of their operation. Before he was stabbed to death at a craps game, he hatched a plot to kidnap and ransom the infant son of a wealthy Maine family. Blaze intends to move forward with the plot.

George had always been the brains of the duo who ran numerous cons and occasional robberies over the years to support themselves. Without George’s guidance, he would not have the know how to carry out the plan. However, George talks to Blaze in his mind, chiding him and coaching him as he plans and executes the kidnapping.

Blaze makes preparations. He buys everything he needs to care for a baby and takes it back to the dive flat he inhabits. He then buys a ladder, gloves, and other tools he will need to carry off his plan.

Blaze travels to the mansion of a shipping tycoon and breaks in. He finds the sleeping baby and takes it. On his way out of the house, he is discovered by the child’s grandmother who has come down to check on her cat. Blaze punches her in the face, damaging her brain. She will eventually succumb to those injuries, making Blaze a murderer as well as kidnapper.

While committing the crime, the dimwitted Blaze leaves behind several clues that will assist police in tracking him down.

He returns to his hovel, stows the car out of sight in the garage, and takes the baby into the shack he and his buddy George once shared. Blaze is clueless about how to care for an infant, but George pipes in occasionally with helpful advice. Blaze becomes attached to the child.

Blaze tries to fashion a ransom note to ask for the $1 million he and George had always dreamed of scoring. Finally, he decides to instead call the family and demand the money be dropped in a briefcase from an airplane. He makes the call and escapes just moments before the police arrive at the phone booth, having traced the call.

The police now know who they are looking for. A parking garage attendant near Baby Joey’s home provided a physical description. Blood left at the scene provided a blood type. The large purchase of baby goods from a commissioned salesperson by a large guy with a dent in his forehead also made an impression. She remembered his name, having read it on of his driver’s license when he opened his wallet. There is now a statewide BOLO for Clayton Blaisdell, Jr. AKA “Blaze.”

Eventually, George tells him the police are onto him and he needs to get gone from the small apartment. Blaze steals a new car and gets gone from his apartment. With no money, he has nowhere to flee. He decides to return to the orphanage where he spent most of his life. The building is now abandoned and secluded. Without heat in the Maine winter, the baby soon falls ill. Blaze is terribly worried and George has gone silent with his advice.

Police figure out where Blaze is holed up with the kid. They prepare to storm the place, but thanks to George, Blaze is one step ahead of him. He flees out into the deep snow and finds a cave where he builds a fire, hoping to warm the baby whose health is deteriorating.

Police stumble onto Blaze’s hiding place and open fire. One of the bullets chips the stone in the cave and one of the chips grazes Baby Joey’s face, lacerating his cheek. The normally calm and reserved Blaze is enraged and he returns fire, killing two cops. He makes a break for it, hoping to get to a logging road where he can sneak back to a main highway.

The police track him down and shoot him. Blaze is shot twice, but continues to stagger forward with Baby Joey protectively cradled in his arms. Finally, an FBI agent delivers the decisive shot and Clayton Blaisdell, Jr., the enormous man who was once a small boy who enjoyed books, falls dead in the snow. Baby Joey is returned to his family suffering from a cold, but otherwise no worse for wear.

In between chapters about Blaze’s misbegotten kidnapping venture are stories of Blaze’s childhood at the orphanage. We read about the few close friends he made there and how those friendships ended tragically. The Clayton Blaisdell backstory is as nearly extensive as the main plot and the book is really two separate stories interwoven.

King makes clear at the beginning of the book that the story is a “trunk novel.” It was written about the same time as Carrie. It was submitted to his publisher with the vampire novel and the publisher opted for ‘Salem’s Lot. While most of King’s early material was later published under the Richard Bachman pen name, Blaze – just 173 pages -- remained in a trunk in the King home. He “discovered” the manuscript in 2006 and decided to rework it into a Bachman book.

According to King, he revised it to remove many of the 1973 cultural and technological references which no longer worked in the story. But he did not “update” it. The novel takes place in an indefinite period in the past. Cell phones are not mentioned. The car Blaze steals is a 1970 Mustang – a car easily spotted in 2006. But the story contains nothing to fix it to a point in time.

King is also up front that the book developed into a thinly veiled homage to Steinbeck’s Of Mice and Men. The ghost of George Thomas Rackley is nearly identical to the cynically wise George Milton and the mentally slow and hulking Clayton Blaisdell is nearly a direct copy of Lennie Small.

As a King novel, it ranks in the middle of his works. It is unusually short at just 304 pages. The story telling is taut, unlike King’s usual sprawling narrative. It contains none of the terror of his horror works and lacks the poignancy that is characteristic of his mainstream stories. But it is a well told story with an interesting central character.

As a Bachman book, it is the best King published since Richard Bachman suffered his death by exposure in 1986. It is superior to Thinner, although it lacked its frantic pace, and is far superior to the atrocious The Regulators.

Blaze is never going to hold a place among King’s prominent novels. Many casual fans have never heard of it. But fans of the master of horror should read it. It’s an easy read and enjoyable. It is also a mix of the young Stephen King who told simple stories, and the mature King whose craft was honed to mastery.

The book also contains a short story called, Memory. The story is about a wealthy construction contractor whose body is badly damaged when his truck is run over by a crane on a work sight. His brain damaged, his body racked by pain, and his moods unstable, he drives away his wife and many of his friends. King clues us in that this short story is a taste of the novel that will soon follow Blaze -- Duma Key which is very much about King's own experience with painful rehabilitation from an accident.

Posted by Brian Schwartz at 4:19 PM