Fresh off their less than successful attempt to launch a television series based on their television anthology movie, Trilogy of Terror, Dan Curtis and science fiction/horror writer William F. Nolan brought Robert Marasco’s haunted house story to the big screen. It’s a good, but not great movie. But it contains a scene that, for many younger baby boomers and older Gen Xers, is iconic in horror. 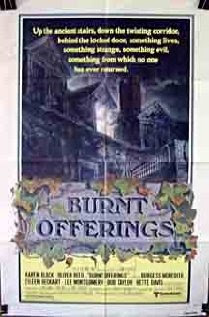 Curtis cuts through the drudgery of the Rolfes’ life in New York by eliminating the entire opening of the book. The movie opens with Ben (played by Oliver Reed), Marian, (played by Karen Black who was four months pregnant at the time), and David driving upstate to see the Allerdyce mansion.

From there on, the movie very closely follows the book in its events, right up until the end when Curtis and Nolan team up to bring the story to closure as opposed to Marasco’s rather ambiguous, open end.

The Rolfes meet the kooky Allerdyces and agree to rent their mansion. Marian begins her cleaning jag and while Ben resents being abandoned. Marian won’t make love to him and has very little time for him. Elizabeth (played by Bette Davis) slowly weakens and succumbs to the house’s malevolent ability to prey upon the weak.

While sticking very close to the Marasco story, Curtis does conjure up what, for me and for other fans and non-fans of horror, was a iconic image. Marasco briefly tells of Ben having a memory of a hearse showing up to pick up the body of a neighbor when he was a kid. He was haunted by the appearance of that dark car and he briefly recalled seeing the driver getting out of that car and being afraid to look at him.

In the movie, Ben is bedeviled by this nightmare. Only, it is his mother’s funeral instead of a neighbor. As the obsequies are concluded, young Ben turns from the grave and heads toward the waiting limousine. From that black, foreboding car, emerges one of the creepiest figures in horror. He’s no monster. He’s just a man. But the black costume, the mirrored sunglasses, and the haunting leer (performed by character actor, Anthony James) chilled my heart and gave me a nightmare or two when I saw this movie as a child. Others I know, when I mention this movie, will say, “That’s the one with the creepy chauffeur!” That scene, also viewed as a child by my wife, put her off horror movies forever. It is a powerfully written and directed character that appears a few times during the movie’s most chilling moments. 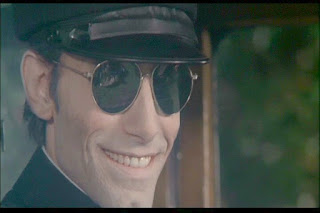 As in the book, Ben sees to Aunt Elizabeth’s funeral while Marian stays behind to see to Mrs. Allerdyce and the house. She finds the greenhouse in full bloom after Aunt Elizabeth dies. In the movie, Marian's reaction was one of revelation. She’s just figured out the house’s true nature. In the book, it is never explicitly stated, but the reader is lead to believe, that Marian knew all along what the house wanted.

The movie rushes toward its climax the same way it did in the book. Ben decides he’s taking David and getting out. He tries to make his way up the driveway, but a tree falls into his path. He tries to ram his way past and busts his head on the steering wheel. Marian arrives to drive the car back to the house. When the pull up to the house, Ben sees the hearse and its chauffeur waiting for him. He lapses into catatonia.

At this point, Nolan and Curtis write their own ending which is much more climatic than Marasco’s. As in the book, Ben is sitting poolside watching David swim with no apparent interest. David decides to try to impress dad by swimming to the deep end. The pool goes crazy with waves, forcing David deeper and deeper and taxing his strength to stay afloat. Ben is paralyzed.

Marian sees this from the house and tries to get outside, but the house closes and locks all the doors. In the book, she looked on from inside as her child drowned and Ben falls to the concrete, busting his head with a fatal blow. In the movie, Marian breaks a window and escapes the house. She plunges into the water and saves David.

Now, even Marian has had enough. She tells Ben and David they are leaving. Ben, still weak, regains his senses. They load up the Country Squire and prepare to depart. Just as they are getting ready to pull out, Marian says she needs to check on Mrs. Allerdyce one more time. Against Ben’s protests, she heads toward the third floor sitting room.

Ben and David wait patiently. Marian does not return. Ben tells David to stay in the car and heads into the house. He walks to the sitting room and finds the door to Mrs. Allerdyce’s room open. He walks in and asks Mrs. Allerdyce what has happened to Marian. The old woman slowly turns in her chair and faces Ben. It is Marian, now old and gray. She’s says, “I’ve been waiting for you Ben!” and launches herself at him. Ben flies out of the third story window and lands face down on the Country Squire’s windshield.

David gazes upon his father’s shattered visage and panics. He scrambles from the car, turns to the house, and screams for his mother. He looks up to see one of the chimneys “remaking” itself. The old bricks fall in an avalanche and kill him.

The movie ends with the Allerdyces returning to find their precious home – their “darling” restored for them. The final scene is the camera panning across all of the ancient pictures on the sitting room table. At the far right, there are four new pictures. They are of the Rolfe family.

As I stated in the opening, this was a good movie, but not great, just as the book was good, but not great. Nolan and Curtis did nothing to shore up the plot holes left by Marasco in the mysterious glasses that seem to trigger the attack in the pool by Ben on David.

The book focused itself on Marian’s conflict over keeping her family or keeping the house that doesn’t belong to her. The movie does not use this as its source of conflict. Ben’s deteriorating mental health is the focus of the movie and Ben emerges as the prime mover in the plot as opposed to Marian. Marian seems completely oblivious to her own behavior, the house’s slow restoration, and the horrifying events around her.

One gathers the reimagining of Marian’s character when it is she who declares that they are leaving after Ben’s abortive attempt. In the book, she’s already decided that she would sacrifice her family to keep the house. Her moral dilemma is how to rid herself of the feelings of guilt over it. In the movie, she’s terrified of the house when she discovers how it draws off their death, pain, and misfortune.

The ending crafted by Nolan and Curtis was much more satisfying for the movie viewer than Marasco’s. Marasco’s ambiguity worked on the printed page, but would have left viewers entirely frustrated. In the book, Ben and David die in a whimper, not in the dramatic fashion of the three story plunge or being crushed by an avalanche of brick. Marian’s end is not so clearly defined. But we can assume that she’ll be the old woman in the third floor bedroom, being waited on by the next group of summer renters.

Marasco’s book had a common subtext about the importance people place on big homes and beautiful possessions versus their family and loved ones. Curtis and Nolan tell a story that is devoid of subtext. Theirs is straight forward horror in a haunted house. When this type of horror is done well, it’s the best kind. Curtis and Nolan did a good job pacing the events in the Marasco book and creating horrifying images to enhance the viewing experience.

The acting was average. I’ve never been an Oliver Reed fan. In Burnt Offerings, he can’t quite decide if he wants to shed his English accent. At times, he sounds as if he’s trying to be American. In other scenes, he reverts to his standard accent. Karen Black turns in an acceptable performance that does not match her work in Trilogy of Terror. The great Bette Davis’s character is marginalized somewhat compared to the book. But she was Bette Davis and did as much with the character as the script allowed.

My only other complaint is the film is not well lighted. It was shot entirely on location in a mansion in Oakland, CA (the same mansion used in Phantasm, so one can't expect the same quality that one could expect from a sound stage.

Burnt Offerings isn’t high cinema, but it is fun and at times, truly scary. For horror fans who have not seen it, it is a must see if, for nothing else, the dreaded chauffeur!