For years, Stephen King complained that Stanley Kubrick did not do his third novel justice when he made his 1980 movie. Forget that the movie is universally heralded as one of the finest horror films ever made. Forget that Jack Nicholson defined Jack Torrance as one of horror’s great villains with the classic line, “Here’s Johnny!” Forget that Stanley Kubrick was a Hollywood legend. King was going to have it his way eventually. 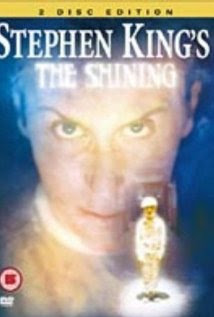 That he did in 1997 when he and Mick Garris teamed up for a three part television miniseries based on the novel.

King’s chief criticism of the Kubrick film was Jack Nicholson’s performance. The key to The Shining, according to King, was the slow deterioration of Jack Torrance from meek and mild recovering alcoholic to insane monster. To King, Nicholson started out the movie as an insane monster. Most horror fans think King ought to appreciate the genius that Kubrick applied in translating one of his great works to film. But it’s King’s book and King has the right and the pull to make it the way he wanted it. So he did.

King’s rendition of his book opens with Jack Torrance (played by everyman Steven Weber) in the boiler room, learning his new duties. Danny and Wendy are back at their low rent apartment in Boulder, Colorado. The audience learns of Jack’s run in with the student that cost him his job and Jack breaking Danny’s arm through flashbacks early in the movie.

King changes the relationship between Jack and Al Shockley for the movie. It appears that Al is merely his Alcoholics Anonymous sponsor. No other connection is demonstrated between them other than it is Al who got Jack the job.

Danny gets a visit from Tony as Jack is returning from the Overlook. Tony is an adolescent boy who is visible to Danny and to the audience. Tony tells him not to go to the Overlook Hotel.

King sticks close to his script otherwise. Jack has his mild confrontation with Victor Ullman about his prior drinking problem and the problem with the caretaker, Grady, the year prior. Shortly thereafter, The Torrance family moves into the Overlook.

Danny has his conversation with Dick Halloran whilst the maintenance man shows them around the kitchen. When demonstrating his shine, Danny not only gives Halloran a bloody nose, he busts the tail light on his vintage Cadillac.

Just as in the book, Halloran warns Danny away from Room 217 and from the topiaries. With that, Halloran departs, leaving the Torrances alone.

Events unfold almost precisely the way they did in the book. The chief departure comes in Jack’s break with reality. In the book, it comes after he finds the woman in room 217. In this movie, it seems to come after the interlude in the bar where Jack is talking to himself. In this movie, Jack goes downstairs and hears his father talking to him through the CB. This seems to be Jack’s snapping point here.

From then on up until the end, it’s Stephen King bringing his book – dialogue and all – to the small screen. There is a small departure from the text at the end when Jack returns to the basement to try to dump the boiler. Grady and the manager are there desperately pleading with him to get it done. He starts to release the steam, then gets a grip on himself one last time and closes the valve. Grady and the manager look on in horror as the boiler erupts.

It ends with Dick Halloran arriving late for Danny’s high school graduation. As Danny’s name is called and he walks across the stage, we see that Tony was really Danny all grown up. As Danny prepares to depart from the stage, Jack’s ghost is there to witness him graduating.

I’m not going to compare this film to the Kubrick film because there is no comparison. Stanley Kubrick’s vision was superior in every way. I will, however compare some of the performances.

Steven Weber is a lightweight. I don’t say that to denigrate his acting ability. He’s a fine comedic actor. But his personality doesn’t have the gravitas to carry off a monster. In the King version, Weber had to wear makeup to look evil. Nicholson did it with nothing but the face God gave him.

I was never that enamored with Shelley Duvall’s performance in Kubrick’s film. I thought it was the one weak element in an otherwise near perfect film. Rebecca DeMornay is dealt a weak hand with a weak script, but somehow elevates the part. She’s closer physically to how Wendy Torrance is described in the book. Duvall always seemed to whine or scream hysterically. DeMornay carried just an irritating (in a good way) hint of self righteousness that was part of what drove Jack crazy. If only DeMornay could have been in Kubrick’s film.

The script for this movie was just atrocious. King has done some good screenwriting with movies like Storm of the Century. This was not as bad as Maximum Overdrive or Rose Red, but it was still bad. The whole “kissin’ missin’” routine that played out between Danny and Jack was nauseating. King’ determination to stick to his text even when plot elements were not going to work as screen elements (the topiary attack being the prime example) debilitated the film by making the viewer groan at bad special effects.

King also chose the wrong medium for his movie. Everything about The Shining screamed “Rated R.” King had to tone down his story to get to a TV-14 rating. I don’t think it rated even that. TV-PG might have been more appropriate for this vanilla offering.

King fans love to berate Mick Garris. He should be berated for some of the poor products he has created from King’s work. In The Shining, I think Garris got maximum mileage out of the poor script, making what should have been a lousy movie into a acceptable one. He got as much as he could out of Weber and Courtland Mead who played Danny Torrance. Unfortunately, Mead was no Danny Lloyd who gave us that iconic creepy line, “Danny's not here Mrs. Torrance.”

The movie is overlong, it lacks the gravitas of the novel and the earlier movie. However, much, much worse movies have been made based on King’s work and the story is just good enough to carry this movie. It is watchable and mildly entertaining if you don’t mind the investment of more than three hours.

Posted by Brian Schwartz at 1:47 AM