State of Fear By Michael Crichton

Every once in a while, someone will pen a work of fiction that will generate controversy in the real world for its contents. Michael Crichton did that in 2004 with State of Fear when he challenged the underpinnings of the phenomenon of global warming. It’s too bad he didn’t take the time to make the novel a worthwhile piece of fiction. 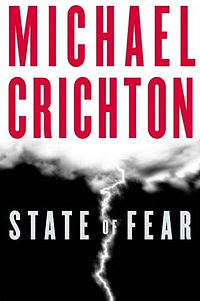 State of Fear opens on the eve of a major global environmental summit. The organization sponsoring the summit, the National Environmental Research Fund plans to announce that it is going to file a lawsuit against the U.S. Environmental Protection Agency on behalf of a small island nation who they claim is in danger of being flooded by rising ocean levels brought on by global warming.

The financier of this lawsuit is George Morton, an exceptionally wealthy man known for giving generously to environmental causes. Morton has retained the services of a large California law firm to oversee the donation and the lawsuit. Junior associate Peter Evans who is dedicated to fighting industrialists and the sources of global warming.

Before the conference convenes, Morton is visited by Nicholas Drake who claims he is a professor and researcher from MIT. Drake shows Morton how his money is being misused by NERF. Morton has Evans revise the agreement with NERF to allow them to only access small amounts of money at a time from their endowment, all but destroying their planned lawsuit.

Drake is not a college professor. He and his associate, Sanjong Thapa, are law enforcement agents pursuing a rogue environmentalist group known as the Environmental Liberation Front (ELF) who carry out terroristic acts in the name of protecting the environment. They have uncovered a scheme by ELF to carry out a few acts of disguised eco-terrorism during the conference. These acts are designed to heighten fear of global warming.

At a banquet before the summit, Morton takes the stage and is apparently drunk. He announces that he is pulling his backing from the lawsuit. He leaves the stage without taking questions and jumps into his recently purchased Ferarri. He dashes off and the car is found crashed several miles away. Morton’s body is not recovered, but he is presumed dead.

Drake, meanwhile, is continuing his pursuit of ELF. As Morton’s agent, Evans demands to go along. Evans, the true believer in global warming, wants to prove that Drake is nothing more than a shill for the evil industrialists who are destroying the environment.

Their first trip takes them to Antarctica where ELF plans to use explosives to calve a major ice berg from a glacier so it can be blamed on global warming. Drake foils the attempt. Meanwhile, members of ELF nearly kill Evans and a female associate by forcing their snow mobile into a deep cavern where they are left to die. They escape, but Evans unquestioned belief in global warming is unshaken.

Next they travel to the deserts of Arizona where ELF has set up lightning generators which are designed to precipitate a major storm that will cause flash flooding. To heighten the sense of disaster, ELF has arranged this to happen at the same time numerous hikers, picnickers, and tourists will be killed in the park.

Drake, Evans, and their friends shoot it out with a number of members of ELF, but ELF is successful in creating the storm. Fortunately, a prescient park ranger is able to move the people out of harm’s way before the flood hits and tragedy is averted. The seeds of doubt are starting to grow in Evans’ mind.

The third act to be thwarted is an underground explosion in the south Pacific that will cause a tsunami that will strike the coast whilst the environmental conference is ongoing. The tsunami will kill people and cause billions of dollars in damage. Drake insists to Evans that his friend and supporter, a famous actor, accompany the group to the remote south Pacific Island.

As the group approaches the island via helicopter, the actor, Ted Bradley, remarks on how simple and primitive the people are and how their way of life is being threatened by global industrialists. Drake points out that they are actually ruthless cannibals. Bradley doesn’t believe him and accuses him of being a corporate shill.

Bradley has a few moments to reconsider after the group is captured and the native dine on his left cheek before killing him. Drake, Evans, Evans’ new found love, Sarah, and Thapa are to be next on the menu when they are rescued by none other than the old man himself, George Morton. They rush to the beach where they shoot it out with the members of ELF. Evans, no longer the true believer, shoots and kills a member of ELF. ELF manages to detonate only some of their explosives which causes a small tsunami. Unfortunately for ELF, if flows the wrong direction and kills them.

The group eventually returns to the United States and Morton tells the group how he staged his own death so he could conduct his own covert investigation of NERF and how his money was being spent. He has decided to establish his own environmental organization and wants Evans to run it. Evans, who has lusted after Sarah (Morton’s secretary) since they first traveled to Antarctica, gets his girl. The evil environmentalists are thwarted and they all live happily ever after.

This was a book of the month for my book club. It was panned by all in attendance save the man who nominated it for reading. Their complaints were similar to those I would express. It just wasn’t very well written.

The action scenes were well written. Crichton was well established as a writer in 2004 and his craft was honed. The guy knew how to write an action scene that moves a novel forward at a rapid pace.

However, the points between the action would be broken by long lectures about global warming and how it was not a real phenomenon. I don’t mean dramatic encounters between antagonists. I mean honest pauses in the story’s narrative to lay out scientific facts. Within the text of the story were numerous charts and graphs to make the point.

I am not a believer in climate change and neither were any of the people within our book club. It wasn’t the politics of the book that discouraged us. It was Crichton’s style of introducing his data.

The story had other weak points. The reader knew from the moment it happened that Morton’s death was staged. Him turning up in the south Pacific was no surprise at all. Crichton feints at creating sexual tension between Evans and Sarah, but doesn’t make a real effort at it, leaving the characters rather flat. They had no nuance. Everybody was a true believer in their cause and nobody had any dimension. Evans, who was the center of the story, came across as a naïve dolt.

The book has appendices where Crichton lays out his case against global warming. I didn't bother reading them. One of my personal peeves is mixing politics with my escapism. I spend enough time worrying about politics. I don't like them in my fiction or my music.

Crichton came under attack from the scientific community for what they deemed his spurious science. One might expect that because the proponents of climate change have the upper hand and have indeed created a scientific state of fear in the global media. When someone with Crichton's credibility challenges it, they let loose on him.

The man who nominated the book recognized the weaknesses in the writing. He nominated it because it was the first piece of literature, fiction or non, that challenged the notion of global warming. To him, the book was a revelation. That would have been the case in 2004 when people were much less inclined to challenge the establishment that continues to propagate the notion of man made climate change. Today, the book just reads as an ill conceived novel. Crichton has written many and much better books.

Posted by Brian Schwartz at 4:41 PM