Book to Movie: I Am Legend (2007)
Screenplay by Mark Protosevich and Akiva Goldsmith
Directed by Francis Lawrence
Based on the novel, I Am Legend by Richard Matheson

Thirty-five years after the Omega Man, Richard Matheson’s tale of the post apocalypse was brought to the big screen one more time. The first, The Last Man on Earth, stuck to the original premise and story of the Matheson book. The second was an action thriller with a bit of commentary on the death of the counter culture. This one was a medical thriller. 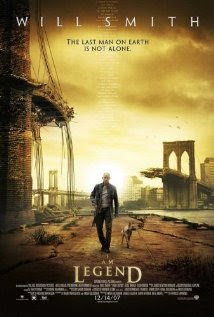 As did The Omega Man, this movie gave but a tip of the cap to the original Matheson concept. The movie opens with a CNN interview of a doctor who’s just developed a cure for cancer. She says she’s mastered using the components that destroy our body to heal it.

We then flash forward to Dr. Robert Neville driving through the streets of New York City in a hopped up Mustang. Deer roam the streets now. Corn grows in Central Park. Desiccated dead bodies lie in the streets. He wrecks his car (much as Dr. Neville in The Omega Man) and has to replace it. Neville drives the streets with his sidekick, a German Shepherd that somehow managed to avoid the plague.

He comes home to a laboratory full of zombified mice. He’s working on a vaccine he hopes will cure the disease. But each new attempt meets with failure.

We get some flashbacks of the spread of the plague. Dr. Neville uses his pull with the Army, (he’s also Lt. Col. Robert Neville) to get his family out of New York. He puts them on a helicopter and instructs his wife to take their daughter to a cabin in upstate New York. However, the helicopter meets with disaster and he watches his family die.

Director Francis Lawrence tries to retain some of the flavor of the Matheson story by showing us a little of Neville’s loneliness. He has set up mannequins in a video rental store. He talks to them as if they’re fellow customers and has even set up a sales clerk. He dutifully returns his videos before checking out new ones.

One day he sets a trap to capture one of the zombies. (The zombies in this film are quick, stealthy, and dangerous). He captures a female zombie and takes her back to his laboratory where he chains her down and takes her vitals. The zombies in this film aren’t really zombies at all. Rather, they are mutated humans. They have heart beats and breath. After taking the zombie’s vitals, he injects her with his latest serum.

One day he’s out exploring when he falls for a trap apparently set by the zombies – a trap exactly like they set for him. He manages to escape the trap, but accidentally stabs himself in the leg. His dog stands off with a pack of zombie dogs who are held back by the last rays of sunshine. When the sun finally sets, the zombie dogs get his companion and he fights off zombies until he’s rescued. He loses consciousness just as he’s being rescued.

He awakens in his apartment to find a woman and a boy in his kitchen. They have rescued him and brought him back to his house. The woman, Anna (not Ruth) says they are headed for a survival colony in Vermont. Neville says there is no survival colony. There are no survivors, he tells her. They are what’s left.

He takes her down to show her his laboratory. That’s when he notices the zombie chained to the table has changed. Instead of the gray, pallid skin it had before, it has started showing color. The pulse and respiration is down. He’s confident he’s got the cure.

When they go back upstairs, the zombies, having followed them back to Neville’s lair, attack. There are hundreds of them storming his brownstone. He kills many of them with booby trap bombs, but still the come. He, Ruth, and the boy, Ethan, head for the cellar and the laboratory and hide behind reinforced plexiglass. The zombies start throwing themselves at it, slowly breaking it down.

Neville draws blood from his cured zombie and gives it to Anna. He tells her to take it to the survival colony if one exists. He then tucks the two of them into a shelter behind an iron door. As the zombies burst into the laboratory, he detonates a grenade, killing himself and the zombies.

The next day, Anna and Ethan find the survivors colony in Vermont. They enter and she hands over the serum.

This movie ranks slightly higher in the IMDB.com rankings than the other two and I have no idea why. Its characters are thin. In the first two, Neville is thoroughly developed as a lonely man. In the third incarnation, Neville just isn’t that sympathetic because he’s only given a few minutes of backstory.

Matheson’s original tale is one part vampire, two parts zombie. This film has none of the vampire or zombie lore in it other than the creatures are resistant to light. Much of what made the first film so engrossing was the mindless nature of the creatures. The second film made them intelligent. This film made them into CGI eye candy. They had no depth. They were nothing to fear and lent nothing to the atmosphere of the picture.

Will Smith does what he can with the role of Neville. But, with a thin character and a few poorly shot action sequences, there wasn’t much for him to work with. The pervasive loneliness of the book and the first two films just weren’t in the script and that makes him the weakest of the three Nevilles.

The final zombie assault on Neville’s apartment almost felt like it was the obligatory CGI scene. It was overdone and directed with a ham hand. They could have used a couple dozen human actors and achieved a much better effect and drawn out the final fight for much longer.

We are given no context of the plague, why it started, why Neville, Anna, Ethan, or any of the survivors at the survivors complex are immune. We know its cause, but we get nothing beyond it. Nor are we emotionally affected by it. The one emotional scene in the movie was caused by a collision of helicopters.

The writers and directors of The Omega Man jettisoned much of Matheson’s story and still made a half way decent movie that was silly at times with all of the hippie patois, but still had depth and well developed characters. This story had shallow characters, dull plot, and a limp ending compared to the other two. Of the three movies based on the Matheson masterpiece, this one is the worst.

Posted by Brian Schwartz at 7:16 PM