Book to Movie: The Washingtonians (2007)

The teleplay expands upon Bentley Little’s short story which contains a thinly veiled distrust and dismissal of the popular conception of history and the men and women who made it. 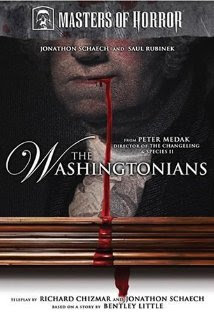 The teleplay opens with a young woman hitchhiking along a lonely road at night. A car passes and does not pick her up. She continues walking. She is set upon by a man on horseback, wearing a tricorner hat. He decapitates her.

The scene then switches to a family of three in a minivan. Mike Franks, his wife, Pam, and their daughter Amy are on their way to Mike’s grandmother’s house. She has recently died and he has been willed the house.

After taking possession of the house, the little girl finds a portrait of George Washington in the basement. She knocks it over, damaging the frame. When Mike picks it up, he notices something tucked behind the canvass. It is a letter from George Washington and a fork. In the letter, George Washington says the fork is carved from the bone of a human femur.

Mike takes the letter to the lawyer probating his grandmother’s will. The lawyer is eager to have the letter to sell to collectors. When Mike refuses to turn it over, the lawyer gets aggressive and demands that he hand it over. He then backs off and tells Mike to sleep on it.

The next day, the family is in town at the local diner. They notice that the people in the diner are all attacking their meat – raw meat – with gusto, allowing the blood to run down their faces.

That night, a group of men dressed in the regalia of Continental soldiers show up at the house and begin hammering on the doors. Mike calls the police. The men disperse, promising to return.

Mike calls a friend who is an historian. His friend is alarmed when he learns about the letter and promises to come over. He arrives and explains to Mike that history is not what it seems. Historians, he explains, are little more than public relations people for historical figures. History, he says, is actually ugly and many of our revered heroes were men of great evil.

He says there is a secret society in town called The Washingtonians. George Washington was in fact, a cannibal who enjoyed dining on the raw flesh of humans. This society was created after his death to preserve the traditions established by Washington of eating humans.

As they are discussing this, the Washingtonians return. Mike’s friend takes the letter and disappears. The Washingtonians burst in and seize the family. They take them to a great dining hall where the people are all dressed in period costumes and dining on human meat.

The leader of the group takes them on a tour of the hall. He shows them the forks carved out of the bones of the Continental Congress. He shows them the table Thomas Jefferson – himself a member – anointed with his own blood by sacrificing himself to be eaten by the Washingtonians. He then informs Mike that the group plans to dine on him and his family. But first, they want the letter.

We flash forward to six months later. The family is living in a modern home in a modern suburb. They have ordered vegetarian Chinese food and are listening to a talk radio host rant about the distortions of history. Mike is at the door getting his change when he notices the one dollar bill is new. They’ve changed Georges the delivery man tells him. Mike looks at the one dollar bill and it is George W. Bush who now appears on the single.

The episode is great camp, but it is also incredibly graphic which was a trademark of the Masters of Horror series. It’s one of the better episodes in the series, but not the best. One should watch it with a sense of humor because it really degrades our nation’s founding father and first president.

The teleplay varies somewhat from Little’s story, but keeps the premise intact. Little’s story skips the prelude of the lawyer and the lunch at the diner. It really gets rolling when he goes to his friend the historian. However, it is the historian who reveals the existence of the letter to the Washingtonians. In the teleplay, he was the hero. In the short story, he was the villain.

The short story ended with an alternative group of historical preservationists dressed in Redcoat garb bursting into the room and taking on the Washingtonians.

To date, this is the only Bentley Little work to find its way into the electronic media. That is a shame because, while Little tells a lot of really off beat, whacky stories, some of his stuff is creepy and almost always contains an interesting subtext.

Posted by Brian Schwartz at 1:26 AM

Labels: Bentley Little, masters of horror, The Collection, The Washingtonians