Hollywood was churning out Stephen King stories like crazy in the mid 1990s and most of them were made for television miniseries. However, Stephen King’s feminist novel, Dolores Claiborne, got the big screen treatment in 1995. Had it not been for the ridiculous climax, it would have been a rare case of the movie being better than the novel. 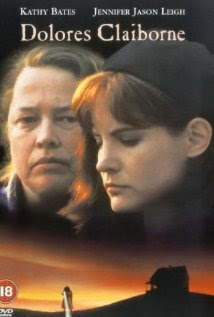 The book was written as a monologue with Dolores Claiborne, housekeeper for Little Tall Island matriarch, Vera Donovan, telling her life story as part of a confession to having murdered her husband in 1963 and being innocent of the murder of Vera Donovan in 1995. As one might imagine, Dolores Claiborne was the star of her own monologue. The theme of the book was the evil that men do to women and how women must stick together when men do evil.

The movie’s plot is much different. The movie revolves around Dolores’ relationship with her daughter, Selena. From the start, we learn that the two have been estranged for many years. Why, we learn through the course of the movie.

The movie opens with the silhouettes of two women struggling at the top of a stairs. An elderly woman (Vera) then plummets down the stairs and comes to rest on the landing, badly battered. We then see Dolores Claiborne (played by Kathy Bates) go to the kitchen and grab a marble rolling pen and return to Vera, lying prostrate on the landing. She holds the rolling pen above her head, apparently intent on crushing Vera’s skull. Then, the mailman walks in with a certified letter, catching Dolores red handed preparing to murder Vera.

We then flash to the offices of a New York based news magazine where high profile reporter Selena St. George (played by Jennifer Jason Leigh) is arguing with her editor about covering a high profile story. An anonymous fax arrives at the magazine’s offices for Selena that includes an article about her mother being arrested for murder.

Selena travels to Little Tall Island – her first visit in 15 years – to help her mother. She finds Dolores at the police station, not under arrest, but in custody. She secures her mother’s release and the two return to Dolores’ home which has been vandalized by island residents who believe she murdered Vera Donovan.

The movie then becomes a character study of the two women. Dolores looks through Selena’s luggage and finds a pharmacy of pills. We later learn that these various pills are what Selena uses to cope with an unhappy life. Dolores tells her story much as she did in the novel of how she went to work for Vera Donovan and what drudgery it was.

Selena points out that her mother made her father miserable, recalling the incident where Dolores clouts her husband on the head with a pitcher. What Selena does not know about was the beating Dolores got earlier from Joe. We learn that shortly after her father’s death, Selena made a suicide attempt and had a nervous breakdown.

Dolores is surprised to learn that Selena does not recall her father molesting her. When Dolores broaches the subject, Selena, already drunk, flees to the bathroom to take pills to help her cope. She denies that it ever happened. Rather than deal with the unhappy memories, she decides to leave Little Tall Island.

With Selena gone, Dolores travels to the police station to face an inquest conducted by the detective (played by Christopher Plumber) who investigated Joe St. George’s death (set in 1975 in the movie) and is now investigating Vera Donovan’s death. As the inquest starts, Selena returns to the island and mounts a spirited defense of her mother, telling the men present that these two women loved each other and that Dolores’ intent was a mercy killing. Selena points out that the detective is still holding a grudge against her mother because he could not prove that she murdered her husband 20 years prior.

Selena’s performance is so strong that the judge running the inquest releases Dolores. The movie ends with Dolores and Selena reconciled. Selena says she doesn't know how to feel about her mother having murdered her father, but she knows that Dolores did it for her. Selena boards the ferry and leaves Little Tall Island.

Most of this movie is excellent and emotionally engages the viewer. Our heart bleeds for Selena who is trapped in an unhappy home with parents who hate each other and an abusive, molesting father. We sympathize with Dolores who works hard for the domineering Vera Donovan only to have her husband steal her money.

The cinematography of the move is interesting. The scenes occurring in the current are shot either dark or through a blue filter. The flashback scenes are heavily lit. The lighting of the scene where Dolores murders Joe resembles The Ten Commandments. This is interesting because there is no light and dark in this movie. It is a completely dark movie, heavy on emotion. There is remorse, conflict, anger, and hatred. It is effective in establishing what is current and what is flashback.

The cast and performances were exceptionally strong. Kathy Bates played the worn out charwoman to the hilt. Leigh’s performance as an emotionally unstable Gen-X overachiever was also strong. Christopher Plummer was menacing as the detective with a grudge and Judy Parfitt played Vera Donovan as the consummate matriarch.

The most powerful scene in the movie is when Dolores breaks down and starts crying in Vera’s drawing room. Parfitt plays the scene just as King wrote it. She strikes a balance between being coldly detached and concerned for the welfare of Dolores and her daughter.

Once Vera is certain that Dolores is not going to hit her up for a loan to replace the money Joe stole from her, ("Don't look to me Dolores. All my money is tied up in cash." she provides Dolores the counsel she needs to murder her molesting husband. As Dolores leaves the room, we see a single tear roll down Vera’s face which sets the scene for Selena’s defense that the two women were actually close friends. Vera dismisses Dolores by telling her, "An accident can be an unhappy woman's best friend."

Later, as Vera's eclipse party is in full swing, Vera approaches Dolores and tells her to take the rest of the day off to "enjoy" the eclipse with her husband. A dark look crosses her face for just a moment and Dolores gets the message. She tells Dolores, "Sometimes, being a high riding bitch is all a woman has to hang on to."

The climax is enough to degrade the movie. It is foolish to believe that a daughter’s spirited defense of her mother would be enough to get her released. Plummer’s menacing character is destroyed when this veteran detective cannot stand up to the verbal onslaught of this young woman. The subtext of men are evil and women do what they have to do to get by is so pervasive as to make it all seem silly. It was a real emotional letdown after what was otherwise an exceptionally engaging movie.

Posted by Brian Schwartz at 2:47 AM