Paingod and Other Delusions by Harlan Ellison

Paingod and Other Delusions
By Harlan Ellison
Copyright 1965

Introduction (1965): Spero Meliora: From the Vicinity of Alienation 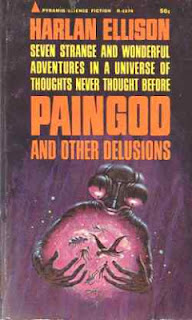 Harlan Ellison introduces his book by saying he’s not going to write an introduction. He claims he has been panned in the past for writing overly long, self-indulgent introductions.

New Introduction (1975 and later editions): Your Basic Crown of Thorns

This longer and updated introduction talks about the nature of pain. He recalls having a dream where he awoke with the thought, “Do you know how much pain there is in the world?” The thought stuck with him.

What follows is an essay on the nature of pain. He talks about how the death of a beloved pet causes a person more pain than the death of thousands in a natural or man made tragedy and includes a long narrative about a letter from a nurse who talked about working with the mentally ill and reading Ellison’s collection of short stories to a mentally ill person.

Paingod
The god in charge of delivering pain to every being in the cosmos never questions why he’s required to do what he does. He just delivers pain to the countless minions of the universe. One day, in a moment of despair, he decides to find out what it’s all about. He visits earth and talks with a failed sculpture who has no accomplishments and lots of pain. He delivers some pleasure to the man and learns why pain is necessary.

I can see from the opening story and the one that follows that this book is going to be very metaphysical. Lots of morality here, but the story is thin. I like stories, not morality or exploration of the human condition.

“Repent, Harlequin!” said the Ticktock Man
In a future where one is penalized minutes off his life span for being minutes late to any appointment, one anonymous man dares defy the time requirements. He also pulls pranks to make the multitudes late. The supreme being in charge of making sure that people arrive on time and are penalized when they don’t, dispatches his minions to track down this civil disobedient.

Mr. Ellison confesses to being a chronically late person. This is his tongue and cheek jibe at himself and all others who hold up the world with their self-indulgence.

The Crackpots
The Kyben rule the universe from their home planet, but they have an embarrassing secret. A large part of their population are lunatics who do the craziest things. They have designated a large force of men dedicated to watching, observing, and recording this behavior. One day, one of these watchers is approached by a nubile “crackpot” and she takes him to their subterranean lair and introduces him to the true order of nature on Kyben.


Sleeping Dogs
A war between the Kyben Universe and Earth has been raging for forty years. Lynn Ferarro has been stationed aboard a Kyber ship as an observer from earth with hopes of being part of a peace effort. Instead, she is forced to watch as a Kyben commander senselessly slaughter the population of a planet to harvest its natural resources. But the Kyben commander’s decisions has serious repercussions for the war.

I’ve not read more of Ellison’s stories about this ongoing war, so it was hard for me to put it into context. It is sound and solid hard science fiction. The character, Lynn Ferarro is well developed and the narrative well paced.

Bright Eyes
A creature – the last of his race who existed before the dawn of time – finds that it is time for him to venture forth into the world and share the secret of his race with the creatures that have inherited it. An oracle of his ancestors tells him to go to the nearest city of the new race and share his gift – a bag of skulls of his ancestors – with the creatures there. Bright Eyes and his rat-steed go to the town to find they are too late. The inheritors of the earth – man – have annihilated themselves.

What a fantastic piece of post apocalyptic piece of science fiction! Bright Eyes is more atmospheric than plot, but there’s enough plot to keep the reader engaged. The world envisioned by Ellison in this story – with streams clogged by human remains and an ochre sky where stars do not seem to belong – is dreary and dreadful.

The Discarded
After a war floods the earth with radiation, mutations begin to emerge in humans – hideous mutations that no one wants to look at. They are placed aboard a shift that sales endlessly through the solar system, developing its own society and hierarchy. One day, an earth emissary visits the ship and pleas for help. New mutations are emerging on otherwise beautiful people. The people on earth are convinced that mutant blood injected into a healthy person will prevent the new mutations. He offers the Discarded a deal. They give their blood, and they will be allowed to return to the earth. The de facto commander of the Discarded rejects the deal, not trusting earth people. But he is quickly overthrown and the deal is struck. The blood is taken. A few weeks later, a new ship arrives. The mutants hope that it is the ship that will take them back to earth. It is not. It is the latest shipment of mutants to be confined aboard the ship. Among them is the emissary that struck the false promise.

Absolutely one of Ellison’s finest tales! Great science fiction with the subtext of the importance of physical appearance and beauty not thinly veiled. Ellison is creative in describing the various mutants, and derives genuine sympathy for them in the reader who also wants to believe the deal with earth is on the level

This episode was adapted for ABC's Masters of Science Fiction series.

Wanted in Surgery
In the late 21st century, surgeons and physicians are replaced with robots who can perform operations and medical procedures with much more efficiency. Doctors are relegated to mere spectators. When one doctor observes a machine operate on a man who is not given proper anesthesia and dies, he decides to fight back at great risk to his personal and professional reputation.

The fight against obsolescence is a recurring theme in science fiction as technological advancements steadily have machines replace functions once carried out by people. Ellison’s take on human obsolescence is driven by a deep, well developed character and hardcore emotion.

Deeper Than Darkness
A man known as a “paranormal” is found in a local jail by the military and drafted into an interstellar war. He is ordered to use his profound ability to start fires to make the enemy’s sun go supernova. First, he wonders if he can do it and his ego tugs at him. Then, his anger starts to get to him and he considers instead turning his power on the men who plucked him from his menial, but happy existence. Finally, he opts to use his power to escape. He lives out his life a lonely minstrel on a remote planet.

Ellison wraps up his collection of short stories with a real winner! The hero, Alf Gunderson, is well developed as a man of modest means and intelligence placed into extraordinary circumstances by an ability he regards as a nuisance. The military’s intervention in his life makes that mere nuisance a curse. Well told story with a well developed character!

Posted by Brian Schwartz at 3:21 AM