Stephen King’s greatest passions are horror writing and baseball. He’s written about both. Along with being the most prolific horror writer of the last 40 years, he’s published a book on baseball that chronicled the 2004 Red Sox season that ended with that team winning its first World Series in almost 90 years. He also wrote a story for the New Yorker entitled, Head Down, that chronicled the season of Bangor, Maine’s little league team’s attempt at a state championship. That story appeared in the short story collection, Nightmares and Dreamscapes.

Blockade Billy is a suspense story sans supernatural involvement. The book opens with Stephen King interviewing a long retired baseball coach about the unusual events of a season long ago when a fictional New Jersey baseball team brought up a rookie catcher named William Blakely to play after their veteran catchers were lost during spring training. 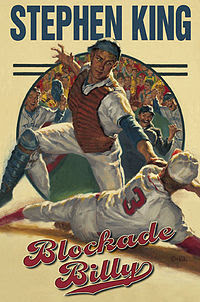 Blakely was promoted to the majors and it was clear he was undersized to be a catcher. Nonetheless, he had a knack for blocking the plate and tagging out runners. He was no slouch with the bat either and quickly became a fan favorite. The fans dubbed him Blockade Billy. He even earned the respect of the team’s temperamental veteran ace pitcher. Billy listens attentively as the pitcher rants about a particular umpire whose strike zone shrinks when he's pitching.

Early in the season, the team’s manager notices that Billy is wearing a bandage on his left hand. He claims he cut himself shaving. Later, when Billy tags out a runner at the plate, that runner has a nasty, but clean slash on his leg. The opposing manager claims that Blakely slashed the runner with a cleat or some other device. But Blakely’s manager blows off the incident. That evening, he notices the bandage is gone and there is no wound where it was.

What’s clear to his teammates is that Blockade Billy might be a good ballplayer, but he’s not real smart. He usually sits in the dugout with a blank look on his face. When someone talks to him, he simply repeats back to that person the last thing that was said to him, nodding in agreement. Billy keeps to himself and is an enigma to his manager and teammates.

The coach is delighted to have a great, young catcher who looks like a rookie of the year candidate 20 games into the season. The New Jersey team is off to a hot start and their veteran ace, Danny Dunis is working on victory 199 when things go wrong.

Their ace pitcher takes a line drive to the forehead early in the game. He finishes the inning, but comes back to the dugout dazed and is pulled. The coach is tossed from the game after arguing a call with the umpire.

He’s sitting in the clubhouse when he’s approached by the owner, accompanied by two men. They explain that they need him to keep the team in the dugout after the game while they arrest William Blakely. Blakely is wanted for slaughtering a family in Iowa.

The coach is stricken by the news and more than horrified. He does as he’s told and the New Jersey Titans team is told to wait in the dugout while Billy Blakely is allowed to go to the clubhouse to privately accept a “rookie of the month” award from the owner.

Except Billy doesn’t go directly to the clubhouse. He detours to the umpires’ clubhouse. There, he uses his nifty razor blade hidden in a bandage to hack and slash to death the umpire that has tormented the team’s ace pitcher through his career. Having completed that task on behalf of his only friend on the team, he surrenders himself for arrest.

Afterward, the manager learns the whole story. The real William Blakely who played for the farm team in Iowa is dead, along with his family. The young man claiming to be William Blakely is actually another Iowa boy named Eugene Katsanis. He was a hired hand on the Blakely farm in Iowa and played ball with Billy Blakely.

Blakely started out a hot prospect, but his career started tanking and it appeared he was headed down from AA ball to A ball. Meanwhile, Katsanis, who was not even on the team, was improving his skills, working with Blakely. When the big league club called for a catcher, Blakely was their only option and they sent him up. That’s when Katsanis made his move.

He killed William Blakely and his family by slitting their throats in their home. He killed the livestock so no one would notice the sound of starving animals from the Blakely farm. He stole Billy’s identification and caught the train east to play ball.

The old coach wraps up by telling King that Blakely ended up being a black hole of bad luck. The team’s first 22 wins of the season were stricken from the baseball record. Blakely’s appearance in Major League Baseball was stricken from the record book. Their ace starter, Dunis, tried to pitch again, but had permanent brain damage. His career was over. William Blakely choked to death on a bar of soap in the county jail, having never told his full tale.

King’s baseball book reads like many other baseball books. Baseball is a boy’s game and no matter how sophisticated the writer, baseball books all end up with a juvenile narrative. While the book appears to be written for young boys, it is an adult story.

We get foreshadowing that Blockade Billy’s story is going to be ugly. The old coach says it’s been years since he’s discussed Blockade Billy and nobody ever asks about it. The whole unpleasant set of circumstances seems to have been stricken from the national pastime’s collective conscience as if by unanimous consent. We know early that there is no record of William Blakely having played in the majors. King takes us through a story with more whimsy than Bernard Malumud’s The Natural before veering off into a dark corner.

Blockade Billy was a short novella published to coincide with the start of the 2010 baseball season and was not widely available in print and is hard to find outside of e-publishing. It’s too bad that it has not been more widely read because it is a great piece of short fiction.

King knows baseball well – much better than Bernard Malamud did when he wrote The Natural. He keeps the jargon to a minimum while constructing plausible baseball scenarios. His players are not caricatures and while not based on any real people, are easily believable.

King also knows horror well and, while he does not employ the plot twist often in his writing, when he does it he does it well. Even with the foreshadowing (which King does do well and often), we never see the horrific events that are to unfold and have already unfolded.

I read The Natural as a book of the month for my book club. I am a baseball fan and a student of the game’s history, but it’s not my type of reading. However, King’s short novella of the ballplayer who never was and the 22 games that never happened in 1957 is a quick, fun, read with an honest to goodness surprise twist.

Posted by Brian Schwartz at 6:01 PM