Books of Blood Volume One By Clive Barker

Books of Blood
Volume One
By Clive Barker
Copyright 1983

Introduction
Horror writer Ramsey Campbell introduces us to Clive Barker and his writing. Campbell promises us violence and sex. He promises disturbing imagery. He promises horrible villains and ghastly creatures. He also promises us soaring and lofty prose flowing from the pen of a man who knows how to write the English language and how to craft a good story.

The Book of Blood
Much as Ray Bradbury set the stage for his collection of tales in the Illustrated Man, Barker introduces a “narrated man.” A fake medium sits in the upstairs bedroom of an allegedly haunted house. The young man claims he can conger the dead to come to him and write their stories on the wall of the room. All over the room are messages from the obscure dead and dead celebrities. On the floor below is the paranormal researcher who has hired him and now knows he’s a fake. But one evening, the dead do arrive and do inscribe their tale. They inscribe it in the flesh of the fake medium. When the dead are done with him, their narratives are etched into his flesh. The paranormal investigator is going to read and research each of those narratives for this book. 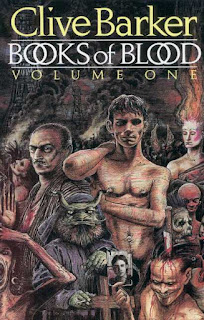 It is a bit of a rip off of Bradbury, but still an affective device for setting up his stories. Very early in the book, we see that Barker has a flourish for setting a scene. He’s not as hung up on the straight narrative as writers such as Stephen King and Bradbury. He is a great mood setter with a taste for fanciful use of the language. The opening story primes the pump for what I hope will be a great book of tales.

The Midnight Meat Train
There’s a butcher loose in New York City and he’s carving up human flesh and hanging it on hooks in New York’s subways. One evening, an accountant on his way home from working late falls asleep on the train. He awakens to find himself in the presence of the butcher’s latest victims. He cowers in fear to the end of the line where he finds a previously secret subway station inhabited by some of the oldest and best families of New York City for whom the repast has been carved.

Not an especially new take on the cannibalism story, but entertaining nonetheless. Barker’s narrative has us wondering if our accountant and the butcher are one in the same. In the end, we find out what keeps New York alive and fresh through the centuries.

The Midnight Meat Train was made into a movie in 2008

The Yattering and Jack
A minor demon is assigned by the overlords of Hell to torment a man to drive him to do evil. The demon is frustrated because no matter what mental anguish he inflicts upon the man, he blows off the misfortune and goes about his mundane life. The demon doesn’t know that the man is aware of the game afoot and the man gets the demon to sacrifice his “soul” to accomplish his mission.

This story had a comedic bent to it and was mildly entertaining. It’s not the usual violent, emotionally turbulent stuff Barker is known for.

Pigs Blood Blues
A retired policeman starts work as a shop teacher at a British reformatory for boys. One mousy boy tells the teacher that one of the inmates who reportedly escaped, is still on the grounds and talks to him at night. This poor boy is the target of other inmates who beat him and subject him to verbal and mental abuse, so the retired cop initially dismisses the story. However, when he visits the school’s farm, he meets a most unusual pig – and the true master of the school.

Pigs, with their cloven hooves, are often symbols of evil in horror. Witness poor Carrie as she is doused in pig’s blood by her tormenters. Barker’s pig is larger than life; an unholy embodiment of torture, hatred, and abuse. This was a great story that requires careful and close reading to get the point of the narrative.

Sex, Death, and Starshine
A director is putting on a Shakespeare production in a dilapidated theater. His star is a no talent soap opera refugee, but he’s involved with her sexually, so he’s keeping her. The rest of his cast is uninspired and the theater owner plans to demolish the theater after the play. One evening, after a particularly abysmal dressed rehearsal, he is visited by an odd theater enthusiast who has a new leading lady in mind. Only problem is, she’s dead. But the show must go on and it does with a dead actress leading the way. All her dead friends are there for her curtain call.

This story had a real gothic flavor to it although it was set in modern times. At times, the writing was a bit raunchy, but not over the top. Frequent point of view shifts were sometimes confusing, but otherwise, this was the best story in the book.

In the Hills, the Cities
Two gay men are on romantic holiday in Yugoslavia when they get lost on rural roads. They hear in the distance an incredible thunder rippling across the ground. They arrive in a clearing to find the carnage of thousands of men, women and children with a man putting the wounded out of their misery. They have come across the once a decade battle between two Slavic cities. Only the people of these cities have found a most inventive means of engaging each other. They fight as “one.”

Wow! What an incredibly inventive concept! People of a town serving as body parts of a much larger being with a singular intelligence and will doing battle with similar people of a similar construct. This well paced story never let up. We go from the tedium of bickering between lovers to the race against the plodding beast bent on destruction. Absolutely brilliant!

This book launched Clive Barker as a writer and attracted the attention of greats like Campbell and King. Barker would go on to publish five more Books of Blood as well as several horror and fantasy novels.