The story title sounds graphic and the short story met that expectation. The essence of the Barker story is in the movie, but the characters are quite different and the resolution quite different. Instead of an accountant reading the newspaper articles about a killer butchering New York subway commuters, we have a photographer who stumbles into the messy affair. 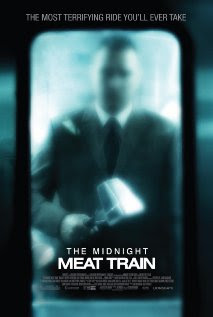 Leon (played by Bradley Cooper) is a photographer aspiring to make it big as an art photographer. He tells a boutique owner he wants to “capture the heart of the city,” and spends his nights capturing the gritty side of New York life. One night, he comes across several young men preparing to rape a young model on the escalators in the subway. He photographs them and points out that if they hurt or kill him, it will all be recorded on a video camera just over his head. The men flee and the woman boards the train. Leon photographs her getting on the train.

The next day, he reads that a model has gone missing in the city. He sees the picture and recognizes the model as the woman he saved the night before. He develops his prints and notices a man wearing a distinctive ring in the photo. He is confident that ring is a clue and takes his photographs to a detective who examines them and is suspicious of Leon, thinking he may have created the photos for the purpose of becoming famous.

Meanwhile, a real life butcher of humans is stalking the city. His name is Mahogany (played quite well by hulking British actor, Vinnie Jones) and he is as methodical as a surgeon in his work. He boards a certain train when he is on the hunt. That train, as we find out, is quite special. He then waits until there is just one person in the car with him. He then takes a large meat tenderizer and bashes their skull in. He hangs the body from the commuter handles and proceeds to prepare the meat for his masters’ repast. The train’s engineer is a most obliging fellow. Not only does he take the train to Mahogany’s destination, he’s quick to help out with a bullet when the situation gets out of hand.

Rebuffed by the police, Leon starts stalking the city at night, hoping to find the butcher – much to the chagrin of his girlfriend, Maya, who just wants him to concentrate on his art photography. He boards a train and waits. Eventually, he falls asleep, but awakens to the sound of people being bludgeoned. He sees people hung up on hooks and being butchered. He is attacked by the butcher and is knocked unconscious. He awakens in an abandoned subway station. Carved into the skin on his chest are runes he doesn’t understand.

Leon does a little historical research in the newspaper archives and finds that there have been hundreds of people reported missing on the New York commuter trains since their original construction. He’s convinced this killer is ancient.

Mahogany is ancient, but he is wearing down and the years are beginning to show. We see Mahogany alone in his apartment, examining his chest. Pustules are growing on his chest and his skin is deteriorating. He carefully removes these pustules and saves them in jars of preservative.

Leon sets out to stalk the New York subways in pursuit of the killer. Wanting to bring the matter to a close, Maya and her friend, Jurgis, decide to break into the killer’s apartment (found through examining Leon’s photos) to gather evidence. There, they find train timetables dating back to the early 20th century with several trains circled in red. As they are gathering their evidence, Mahogany comes home. Maya escapes, but Jurgis is trapped.

Maya goes to the same detective that Leon talked to earlier and presents her evidence. The detective is dubious and directs Maya to take the train home and forget about it. As Maya leaves to board the train, the detective gives a knowing look. She’s in on it just like the subway conductor.

Maya board the train and finds the midnight meat train’s storage car. There, she meets Mahogany and learns that Jurgis has been hung up like a side of beef. Leon enters the car not knowing Maya is there. He attacks the much larger Mahogany. But Mahogany is old and not a physical match for Leon. Leon throws Mahogany from the train as it comes to a stop.

The subway platform at the end of the line for the midnight meat train is littered with bones. Maya and Leon look out with horror when the engineer enters the car and tells them to accompany him off the train and away from the meat. They exit to the platform. There, Mahogany makes one last attempt on Leon before Leon stabs him with a pointed bone. With his dying breath, Mahogany utters, “welcome.”

As this unfolds, dozens of zombie like creatures enter the station and board the train where they attack the meat with gusto. As they dine, the conductor explains that these subhuman underground dwellers are an ancient race who have always dwelt beneath the ground and beneath the city. The butcher and the meat train serve to feed them to “keep the worlds separate.” The engineer then reaches inside Leon’s mouth and pulls out his tongue while Maya screams in horror. The engineer then eats the tongue.

The engineer then grabs Maya and forces her onto a makeshift altar made of bones. He reaches inside her chest and rips her still-beating heart out of her and looks at it lovingly before eating it. He then tells Leon he’s to be the new butcher.

The movie ends with the detective handing the train schedules she received from Maya to Leon. He’s about to get on with his life’s work.

While the short story was clever with a bit of sleight of hand coming from Barker, this was not a well made film and the screenplay had many deficiencies. The most glaring was the resolution – who got the meat.

In Barker’s story, it was the old, distinguished people of New York who fed on the human flesh. In return, those ancients of Metropolis gave life and vitality to the city. That is an intelligent, thought provoking resolution. The screenplay dumbed it way down to some sort of cross between a zombie and a reptile. It wasn’t even really a mystery since there weren’t any real clues offered as to why the butcher was doing what he was doing.

It also suffered from poorly developed characters. Mahogany was well developed with his silent and exceptionally meticulous habits. The sharp contrast between the man who fussed over every detail of his perfectly tailored suits and the man who bludgeoned people as blood splattered all over him was effective.

We got enough development of Leon to know the guy wanted to be a great photographer. Maya and her friend Jurgis got virtually no development. We didn’t care when they died. In what was supposed to be the climax of the movie, we watched as people we didn’t care about died while a director and screenwriter insulted our intelligence with a dumbed down ending. Tack on the cliché of the still beating heart and its all rather anti-climatic.

The marks on Leon’s chest were never explained. The director hints that perhaps Leon may be undergoing some sort of metamorphosis when they show us a love scene between Leon and Maya when Maya is shocked at how rough Leon is with her. The mysterious ring and its symbol are never explained. Not everything in a movie needs to be explained, but when they are offered up as clues, they must be explained.

I’ll give the director credit for not making the movie an exercise in gore. It is violent. It is bloody. But it is not gratuitous and the movie, while not very good, does not rely on the gore factor to carry it. Though they came up short, the writer and director tried to have the story carry the movie.

The movie was a bomb in the theaters, grossing short of $4 million while costing $15 million to make. The title no doubt hurt it because that title just screams guts and gore. A new title would not have saved this film however. While I’d not call it awful, it certainly was not a good film and not worth visiting more than once.

Posted by Brian Schwartz at 2:04 AM