Edmund Morris wraps up his delightfully insightful and well written three volume biography by chronicling and analyzing the final, unsatisfying years of Theodore Roosevelt’s life after leaving the presidency. 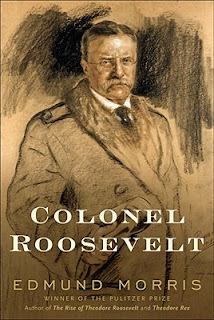 The story picks up with the retired president on safari in Africa. Morris provides a detailed (sometimes excruciating) account of Roosevelt’s exploits in killing lions, rhinos, and other big game in Africa – all in the name of science.

Roosevelt told journalists who were covering his exploits that he was completely divorcing himself of politics whilst on the African continent. But his arrival in Europe upon the completion of the safari saw him inundated with cries of anguish from progressive Republicans angered by the conduct of President William Howard Taft. Chief among those who wept at Teddy’s feet was his old friend, Gifford Pinchot, whom Taft had fired from his position as head of the forestry service.

Taft’s perceived primary offense was a lack of executive action in reigning in trusts. He preferred to let anti-trust cases be settled in court. Far from being idle on the domination of monopolies in the American economy, Taft was militant in attacking them with lawsuits. However, he neither proposed nor enacted any significant anti-trust legislation to the chagrin of progressives like Robert LaFollette who expected decisive action from the man that Roosevelt himself had sold as a true progressive.

Roosevelt was unwilling to attack the current occupant of the White House – adhering to a time honored American tradition. However, he was not above attacking the judiciary which he found entirely too conservative even though most had been appointed by Republican presidents.

When the 1910 elections went badly for the Republicans (sweeping in Democratic majorities in both houses of Congress) Roosevelt became increasingly anxious. Yet he continued to decline overtures to challenge Taft on the Republican ticket. But he always left the door a little ajar, in case he should change his mind.

The break with Taft came, ironically, when the administration filed an anti-trust suit against U.S. Steel which Teddy deemed to be one of the “good” trusts. He allowed his name to be entered into the fray for the 1912 Republican nomination. Unfortunately, Taft’s organization had already secured most of the delegates and Roosevelt did not get the nomination.

However, with the erratic Robert LaFollette breaking down on the campaign trail as the nominee of the nascent Progressive Party, Roosevelt stepped into the void. Rebranding themselves the Bull Moose Party, they hoped to capture progressive Republicans who favored governmental action to regulate commerce, protect workers, and preserve the environment as well as Democrats unhappy with the establishment wing of their party.

What the Progressives did was destroy the Taft candidacy and hand the presidency to Democrat Woodrow Wilson – a Princeton college professor. Roosevelt had no illusions that he was going to win, but he’d hoped to steer the presidency and the country toward a more progressive course.

During the campaign, Roosevelt survived an assassination attempt. A drifter and poet named John Schrank shot Roosevelt in the chest as he was preparing to speak in Milwaukee. Schrank claimed the ghost of William McKinley told him to do it. The bullet hit Roosevelt’s steel glasses case and speech text he was carrying in his breast pocket before entering his chest. He completed the speech before going to a Milwaukee hospital where physicians determined the best course of action was to leave the bullet where it rested.

With what would be his last political campaign behind him, Roosevelt set off on one last great adventure before old age and infirmity would make such an undertaking impossible. He headed for South America where he joined son, Kermit in an expedition to map an uncharted tributary of the Amazon River. The trip was dangerous and cost two men their lives. Roosevelt was injured trying to rescue canoes from washing away. The wound in his leg became infected and he developed malaria.

The two month long ordeal nearly killed the formally indomitable bull moose and he seems to have lost his lust for adventure, although he was quite proud and proud of his son to have been part of such an arduous and historic undertaking.

In his final days, Roosevelt deployed his pen with new invective. As war developed and engrossed all of Europe, he became a staunch advocate for American preparedness and a vocal critic of Woodrow Wilson who was quite adamant about keeping America out of the war. Most of America was on Wilson’s side, despite the fact that Germans kept sinking ships and killing American passengers. He declined to enter the 1916 presidential contest, knowing his views were not popular. He did campaign vociferously for Republican nominee, Charles Evans Hughes, who surpassed the professor in the White House for dullness on the stump.

So enraptured was Teddy with war in Europe that when America finally got around to entering the war, he volunteered to recruit and lead a regiment in Europe. The administration politely declined. Morris doesn’t say so, but the idea of the 60 year old man ravaged by disease and physically out of shape must have struck even his most ardent supporters as sad.

The old man may not have made it to the battlefields of Europe, but his children did. Quentin was wounded in the leg and his youngest, Kermit, was shot down behind enemy lines and died in a plane crash. His body was interred in France where his plane was downed.

Roosevelt was horribly distraught over Kermit’s death. He’d campaigned hard for Republicans in the 1918 off year elections and helped lead the party resurgence. He was certainly popular enough to stand for the Republican nomination in 1920, but his health would not permit it. He threw his support behind his old friend and comrade in arms, General Leonard Wood. Wood went on to lose the nomination to dark horse, Warren Harding.

But Roosevelt was gone before all that happened. In November of 1918, he became ill with his recurrent fevers and lung ailments that kept him bedridden. He never lost his mental acuity and continued to write up until his death in January 1919 of a heart attack. He was just 60 years old.

Morris wraps up his three volumes of Roosevelt lore with a chronology of Roosevelt scholarship. Upon his death, he was adored by all. His was the first face sculpted into Mount Rushmore. He was feted in eulogy by friend and foe alike.

By the 1930s, when fifth cousin Franklin was president, his Square Deal served as a blueprint for the New Deal. He was still held in high regard for his revolutionary progressive policies.

In the 1960s, when anti-war fever raged in the country, Roosevelt’s place in history sagged. He was derided as a warmonger in popular culture and in scholarship. His “Big Stick” philosophy was derided by scholars of that era as imperialistic.

Modern scholarship (thanks in no small part to Morris himself) has seen Teddy’s image rise dramatically. The notion of a Republican able to balance effective government activism with a sense of how to make business work has appeal in these polarized times.

This third book was the weakest of the three books. A large part of this is because it takes in the most sedate and uneventful years of Roosevelt’s life. In his three volume biography of Richard Nixon, Stephen Ambrose took a similar approach – saving his third volume for Nixon’s post presidential years. However, Nixon’s final years were much more full of intrigue and statesmanship than were TR’s.

The tedious detail with which Morris details Roosevelt’s African safari is mind numbing. The account of the Brazilian expedition was compelling, but again incorporated too many details. Dedicating an entire chapter to Roosevelt’s lawsuit with the head of the New York Republican party was probably more coverage than the event deserved.

Despite a few shortcomings, I’ve enjoyed Morris’ three volumes more than I’ve enjoyed any other presidential biography. Morris is a fantastic scholar who must have dedicated countless hours to examining Roosevelt’s extensive writing and public speeches as well as those of his contemporaries to compose such a thorough and exhaustive chronology of one man’s life.

More importantly, Morris is a great story teller. Many scholars can do the research, analyze it, and report their findings. Just a few historians practice the craft of storytelling. Morris ranks with Stephen Ambrose and David McCullough. His three volume story about the life of Theodore Roosevelt is an American treasure.

Posted by Brian Schwartz at 2:50 PM