This 2011 Bram Stoker Award winner was the selection of our book of the month club based on that prestigious award. To a person we were all roundly disappointed in Joe McKinney’s third book in his Dead World trilogy.

The city of Houston has been battered by successive massive hurricanes. Most of the city is underwater. Thousands have died. The situation is dire. 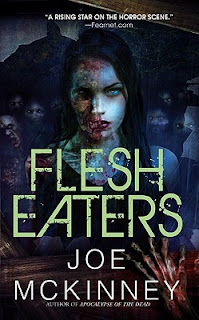 In the middle of this chaos is Eleanor Norton – police sergeant at the disaster command center, wife, and mother. She works hard to create an emergency command center at a local university and assist her boss, Captain Mark Shaw provide shelter and safety to Houston residents who make it as far as the command center.

After weathering the storm, Mark sends Eleanor home. There, her husband and daughter are waiting for her. Their neighborhood is in shambles. They have taken in the elderly woman who lives next door. Prior to the storm, her drug addicted grandson came to her house and stole a television so sell for drugs. When he returns after the storm, Eleanor and her husband confront him. He’s now an inhuman monster. He attacks the family and bites his grandmother before Eleanor can kill him. Shortly after the bite, the old woman also turns into some sort of vacant eyed, mindless creature obsessed with attacking the living.

Back at the command center, Mark Shaw has his own problems. Resources are overwhelmed. Furthermore, the federal government has made it clear that he has screwed up. People with a virus that makes them zombies have escaped the city he failed to secure and now a plague is raging across Texas.

We learn that a virus or chemical was released when the second major storm hit Houston. It causes the living (not the dead) to become mindless flesh eaters. The cause is uncertain, but its source is not. Houston is about to be quarantined.

Shaw is a bitter man. Holding strongly to the concepts of honor and duty, he has watched as less honorable men have been promoted in his stead. Now, he is being blamed for not salvaging a hopeless situation. But he has a plan to get out of the city and make a comfortable life for himself, far from the police politics in Texas’ largest city.

His two sons, along with a fireman buddy, have taken a boat and headed for a local bank submerged by flood waters. They gain access to the safe and find approximately $7 million inside. They load it into a duffel bag and stash it in a swamped car to pick up later.

As they are wrapping up their heist, they notice a large group of survivors moving toward them and a Coast Guard helicopter descending to assist them. They watch, afraid that their theft might have been detected by federal authorities. Their fear evolves quickly as they watch the “survivors” take over the helicopter and cause it to crash in a ball of fire. Anthony Shaw decides it’s time to get back to the command center and report what they’ve seen.

After the encounter with the zombie in their home, Eleanor and her family decide to make for the command center where they think they’ll be safer. They set out in a canoe and for the first time, take in the decimation that used to be Houston, Texas. All around them, the walking dead move in large herds. After being waylaid by zombies and barely escaping, Eleanor and her family make it to an office building where Red Cross volunteers are huddled, waiting for rescue.

Meanwhile, the command center has been overrun. Mark decides to move the survivors to an evacuation station located at an interstate overpass standing above the flood waters. As he is helping arrange the evacuation, his younger son is attacked by the zombies and bitten. Mark is forced to kill him. He instructs his older son, Anthony, to get the money and make for the overpass while he guides the survivors. They head out in an armada of three hundred small motor boats.

Eleanor leads the Red Cross volunteers out of their building which about to be overrun with zombies and heads for the command center. When they get there, they find it abandoned. They head toward the evacuation center. Zombies have taken the city.

Mark leads his evacuees to the overpass where they find thousands waiting in a single line as an army doctor examines them one at a time to make sure they aren’t infected before allowing them to leave the city. He sees electrified barbed wire ringing the city, making sure that no one gets out. He pleads with the Army people to be allowed guns and ammunition to protect the survivors (his own supply exhausted). They agree. Mark and the few Houston police officers are rearmed. However, chaos breaks out as some of the survivors are infected and begin attacking those waiting in line.

Eleanor and her group arrive at the overpass just as chaos ensues. As she and her party look on in horror, she sees Anthony Shaw retrieving a black duffle bag from a pickup truck. She confronts Anthony on the bridge amid the chaos of survivors panicking and police officers shooting. He attacks her and her husband. Eleanor, her wife and son flee the deteriorating situation on the bridge and head back into the city before Anthony can kill them.

Mark Shaw gives up the situation on the overpass as hopeless. He gets Anthony and retrieves the duffel bag he lost in the scuffle with Eleanor and her husband and head off into the city. Mark Shaw – police captain dedicated to honor and duty – has decided he must kill the only witness to his crime – a fellow police officer.

Mark and Anthony pursue Eleanor and her family across the city, battling zombies along the way. Finally, Eleanor tells her husband to take their daughter and make for a group of apartment buildings while she tries to fend off Mark and Anthony.

Mark and Anthony have Eleanor pinned down near a church. Eleanor decides to switch clothes with a corpse. She then blows its head off to hide its true identity. She then tries to catch up to her family.

During the assault on the church, Anthony is bitten by one of the infected and is slowly turning into a zombie. Mark tearfully dispatches him and heads north to try to make it out of the city. She finds her family besieged by zombies in an apartment complex. They manage to escape and make it to the city’s northern border. There, Eleanor outsmarts the guards and she and her family escape the decimation of Houston and flee into civilization. The book ends with Eleanor discovering she accidentally switched bags with Anthony Shaw, leaving her family $ 7 million richer.

The person who nominated this book did so because it was a Bram Stoker Award winner. We concluded that the competition must not have been that stiff in 2011 because nobody in our group thought the book was well written.

Most of us had major problems with McKinney’s character development. His characters were not consistent. Others were stage props when they could have used a little fleshing out.

Eleanor stands well as a character. But her husband is neglected badly. We are allowed to know that he sometimes feels emasculated by his wife who is a tough as nails cop. This feeling is exacerbated when she saves him in the confrontation with the next door neighbor’s grandson. It appeared this was going to be a source of tension in the novel. But that tension is never developed. At the end of the book, he is magically transformed into a man comfortable in his own manhood. Yes, his brave deeds during the flight from the city may have brought this about, but the author should have made this clear. He did not.

Mark Shaw was horribly inconsistent. Was he that noble career cop determined to do his job against all odds? Or was he the jerk who relished killing Eleanor and her family? Early on, he is portrayed as a police captain dedicated to doing his duty and compassionate toward his subordinates who have their own families weathering the storm. He feels betrayed by the department and by his government, so conspiring to steal the money wasn’t an inconsistency.

What was inconsistent was his immediate transformation into a brutal misogynist bent on Eleanor for whom he has a deep seated hatred the reader doesn’t understand and the author does not explain. At the beginning of the book, we get the impression they are close friends. As Mark pursues her through ruined Houston, he keeps referring to her as “that Norton bitch.”

Eleanor is hell bent on doing her duty to arrest Anthony Shaw when she finds out that he’s stolen seven million dollars. She’s determined to do her duty even as the apocalypse unfolds around her. We are led to believe that, while it remains unspoken, her dedication to duty and honor is as strong as Shaw’s. Yet, at the end, she’s perfectly willing to take the money and run because there’s no way the theft can be traced back to her.

Anthony Shaw and other minor characters are cardboard. I understand that peripheral characters don’t get extensive development (unless they’re Stephen King characters), but there has to be some depth to them for the reader to appreciate their actions and reactions.

One member of our book club stated that it was a heist novel set against a zombie backdrop. This was an insightful observation because McKinney’s zombies were little more than a hazard to be dodged. They didn’t get much development either. The money was at the center of this novel – not the zombies.

I was expecting much more from Flesh Eaters based on the reviews I read. Horror fans had nothing but great things to say about McKinney’s third installment in his Dead World series. Perhaps having read the first two would have given me a greater appreciation of the zombies.

The book was completely plot driven and McKinney’s narrative is fast paced and makes for a compelling page turner. But the unbelievable characters and one dimensional story make it an average novel at best.