Stephen King’s infatuation with writing feminist oriented books ended upon the publication of Rose Madder in 1995. Of the five books, Rose Madder is the worst. The supernatural element is tacked on and destroys what is otherwise a decent story.

Rose Daniels is a housewife and her husband, Norman, a cop. Norman beat Rose so badly one day in 1985 that she miscarried. The beatings continue for the next five years as Rose suffers in silence and terror. 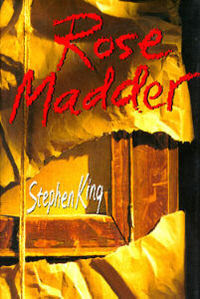 One day, after a particularly bad beating, Rose has an epiphany and walks out the door while her husband is at work. She grabs his bank card, withdraws cash, and heads out of town on a bus.

She arrives in a large Midwestern city 800 miles west of home. King is deliberately vague and imprecise on his geography. A man at the bus station gives her directions to a battered women’s shelter. After a harrowing walk through the city, Rose makes it to the shelter.

She’s taken in an provided shelter and counseling. She lands a job as a domestic at a local motel and starts the first real job of her life and makes some friends. Meanwhile, back in their hometown, Norman’s rage is simmering as he is stunned that his wife would have the nerve to leave him.

One day, on her way home from work, Rose decides to pawn her engagement ring which, based on the size of the stone, appears to be quite valuable. The pawnshop owner tells her what she has is a nice cubic zirconium. Disappointed, Rose is leaving when she spots a painting that immediately grabs her attention.

The painting is of a woman with her back to the viewer, looking down a hill at a temple. The woman is wearing a rose colored chiffon. Rose is drawn to the picture and the woman inside it. She purchases it. During the transaction, Rose’s voice draws the attention of a customer who happens to be the producer of books on tape. He has her do a test reading in the store and invites her to come to the studio to do some reading. Rose lands a decent paying job on a chance encounter. She also discovers a man as she is attracted to the pawn shop owner, Bill Steiner.

Rose’s new painting hangs proudly in her new flat – a room in a boarding house. She notices that the picture has changed perspectives, as if the artist is backing up to reveal more of the landscape. She can hear crickets chirping in the painting and actually finds crickets in the room that seem to have come from the painting.

One evening, Rose is examining the painting and finds she is able to step through into a dark world inhabited by the woman in the rose madder chiffon. She encounters a woman named Dorcas who tells Rose that the woman in the chiffon is a dangerous and powerful being. That woman’s baby is being held captive by a minotaur in the temple. Rose must rescue it. She is given instructions on how to get into the temple and survive.

Rose enters the temple and is able to sneak past the minotaur and grab the baby. She rushes out of the temple and returns with the child. Dorcas is pleased with Rose. The woman in the chiffon thanks Rose and tells her, “I repay.” She makes it clear to Rose that Norman will be dealt with. She gives Rose a gold arm band to take with her.

Norman uses his cop resources and cop instincts to find the city where Rose is residing. He settles in and looks for her. First, he finds the man who gave Rose directions to the shelter. Norman tortures and kills him by biting him to death. He gets his first lead when the man tells him where the shelter is located.

Norman finds out the shelter is holding a picnic at a park in just a couple days. He is confident he’ll find Rose there so he can, “talk to her up close.”

Instead of going right to the picnic, Rose goes on a picnic with her new beau, Bill. While they are off in the country, Norman is scooting around the festival grounds in a wheel chair, looking for Rose. The head of security for the shelter notices something not quite right about the man in the wheelchair. She’s hunting for him when she finds him attacking one of the women from the shelter. They fight and the woman has her way with Norm. He flees the festival before police can arrive.

As he flees from the festival, full of insane rage at having been beaten by a woman, Norm grabs a rubber mask from a kid. The mask is of a bull, complete with rubber horns. Having lapsed into total insanity, he starts taking advice from the mask which talks to him.

He goes to the shelter to see if he can find documents with Rose’s new address on them. He breaks in and kills the woman who runs the shelter. He finds an outgoing envelope with Rose’s address on it. He heads out.

Rose and Bill arrive to find chaos at the festival. Rose and Bill go to the police station where Rose tells her her story and about Norman. He’s now a suspect in two murders in his pursuit of Rose and the cops are taking no chances. They send her home where she and Bill find a cop car stationed right outside her house.

The problem is, Norman arrived first and disposed of the cops. As Rose and Bill are entering her apartment building, Norman surprises them. A fight ensues. Rose kicks at Norman as he’s charging up the steps (wearing his bull mask) and knocks him down. Bill and Rose flee into her apartment.

Rose instinctively grabs the gold band and she and Bill jump into the painting. Norman crashes in and follows. Rose finds Dorcas waiting for her. She has Rose change from her street clothes into a rose madder chiffon. She then runs to the temple, taunting Norman to follow her.

Norman enters the temple. The mask has now become a permanent feature and Norman is the bull that inhabits the temple. Rose continues to taunt him, drawing him deeper and deeper into the ruins. Finally, Norman meets the woman in the painting. She eviscerates him.

Rose returns to where Bill and Dorcas are waiting for her. She changes back into her clothes and finally meets the woman from the painting face to face. The woman is horribly disfigured by disease and clearly dying. But she is still powerful and she does repay favors. She gives Rose some seeds from the pomegranate tree in the temple and a small bottle to help Bill forget the strange events. Her parting words to Rose are, “Remember the tree.” Rose and Bill return to Rose’s room.

As they are discussing what happened and awaiting the police, Rose slips some of the contents of the bottle into Bill’s drink. He forgets the strange events of just moments ago. They tell the police that Norman fled the scene. As far as the police can tell, Norman has disappeared.

Bill and Rose get married. Rose continues to do her books on tape and makes good money. They buy a house in the suburbs and have a baby. Everything is seemingly fine, but Rose is edgy. She finds herself occasionally overcome with the urge to do major violence against those she loves. She keeps remembering those words, “Remember the tree.” Finally she has an idea.

She goes to where she and Bill picnicked the day that Norman let hell loose. It is a special place for her. She plants the seeds given to her by the woman in the rose madder chiffon. A tree grows. Rose visits the tree often for the rest of her life, her rage gone.

Other than Lisey’s Story, this is the worst book Stephen King ever published. It fails to deliver and is not well written at all.

The story works on one level. The story of an abused woman rebuilding her life while, unknown to her, she’s being pursued by her crazy husband is tenable. It falls apart when King contorts his story to make room for the supernatural element which was under developed and poorly conceived.

King tries to make the woman in the painting seem powerful. But with zero backstory, the effort falls flat. The minotaur is supposed to be menacing and set up the tension for the final chase through the temple. But with absolutely no development and no backstory, the character is a dud. The whole, “ze bool,” element of the story was tiresome to read.

King could have easily written this novel as a mainstream story and done better. He worked too hard to contrive the storyline and feint at a Dark Tower tie in. Seldom to King books suffer from underdeveloped characters, but this one did as there was no subplot character development at all.

Rose Madder rapped up what was a painful period for many of his fans. After five not so good feminist novels, fans wanted him to return to horror. He would follow up one his worst books with one of his best in the serialzed, The Green Mile and rewarded fans who’d stuck with him after the horrible failure of Rose Madder.

Posted by Brian Schwartz at 5:16 PM