Dread
A college student makes a new acquaintance who is obsessed with the psychology and philosophy of human dread. He discusses and analyzes it without end. He kidnaps his girlfriend and subjects her to psychological torture, recording the event in a series of photos he shares with the college student. Our hero soon finds himself the subject of a more dreadful and dangerous experiment in terror. 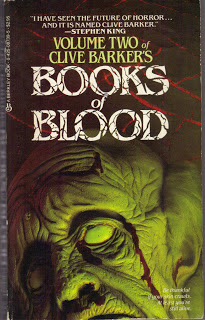 Barker knocks it out of the park with his first story in the second volume of his famous short story collection. The character development is superb and the tension unrelenting.

Hell’s Event
The race for humanity is on as a marathon run starts in downtown London. Unknown to one runner, he is running for the future of humanity because Satan has a wager on the race. Meanwhile, God’s athlete’s agent finds out about the plot and does what he can to stop it.

This was tame fare by Barker standards. Nonetheless, it was an entertaining story. Think, The Devil Went Down to Georgia but instead of Georgia, it’s London and instead of fiddle players, it’s marathon runners.

Jacqueline Ess: Her Will and Testament
A neglected wife tries suicide by slitting her wrists. She survives. While in the hospital, she becomes so angry with a patronizing doctor that she wills him to death by mangling his body with her mind. She leaves the hospital and moves into the world, feeling like the most powerful person in the world. She falls for a lawyer, who ruins his own life to be with her. She feels that she can’t learn anything from him and moves onto a powerful, ruthless businessman who she is confident can teach her to wield her power with similar ruthlessness. She leaves that relationship with him dead and herself disappointed. She evolves into a sort of black widow spider prostitute until her old lawyer friend comes to her rescue.

This story, as the earlier stories in this book, lack the graphic violence of the bulk of Barker’s work. The thinly veiled subtext and overriding theme is how people dehumanize each other. Jacqueline Ess is a sympathetic anti-hero.

The Skins of the Fathers
A man traveling across the Arizona desert happens upon a parade of dinosaur like creatures. They destroy his car and flees to a nearby town. The sheriff organizes a posse to hunt down and destroy these monsters. Meanwhile, a local woman remembers how she was raped by these creatures years before and bore their son. These serpents mean to claim their son, even if they have to kill every person in town to get him.

The storytelling here is not very tight and the plot has all the charm of a Godzilla movie. Easily the weakest story in the book.

The New Murders in the Rue Morgue
A man travels to Paris to help out a friend who has been accused of murder. This man supposedly told the late, great Edgar Allan Poe a tale of murder in Paris that led him to write The Murders in the Rue Morgue. When the man arrives in Paris, he is horrified to find that the murders depicted by Poe have been replicated. However, the culprit as moved up at least one notch on the evolutionary ladder.

This was a great story with which to close this second volume. Horror writers love to go back to their roots and add something to the Poe canon. Barker’s story captures that same mood – cold and uncaring – that Poe achieved in his story. Barker succeeded in modernizing it without bastardizing it or making something foolish of it. Bravo!