War Against the Rull By A.E. Van Vogt

War Against the Rull
By A.E. Van Vogt
Copyright 1959

The War Against the Rull is a “fix up” of five short stories, rewritten to link them into a continuous story. Sometimes, the effort is a rather dubious one, as it was with Van Vogt’s Supermind. Other times, such as with the first volume of Stephen King’s Dark Tower series, The Gunslinger, the effort is much more seamless. 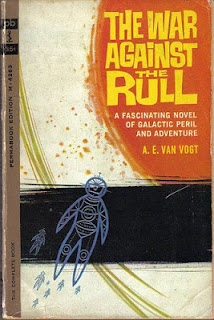 The War Against the Rull is not seamless. There is a definite feel of “shifting gears” between the stories. However, reading the book was not a chore because, while the transition between the short stories was not smooth, the stories themselves were fun.

Trevor Jamieson is a high ranking official in the earth government on a mission to the inhospitable Eristan II en route to try to convince human settlers on nearby Carson’s Planet to assist earth forces in their war against the insectile, doppleganging Rulls of another galaxy. Unfortunately, he is trapped in the untamed wilderness of Eristan II with one of the native creatures of Carson’s Planet known as an Ezwal. Ezwals are nine feet tall, blue, armored and endowed with sharp claws and sharp teeth. They don’t like their human invaders.

To get to their life raft which has crashed a few miles beyond them, they will be forced to work together. The strong Ezwal, who appears to be a brutish, incommunicative animal, is actually an intelligent being that communicates via telepathy. This is a revelation to Jamieson and will be to humans when he gets a chance to tell them.

The first task is survival in this hostile jungle of carnivorous creatures. The strong and dexterous Ezwal carries Jamieson on his back while Jamieson covers them with his blaster with a dwindling power supply. They traverse the jungle and are able to board the ship and travel to Carson’s Planet where the Ezwal returns to his people and Carson goes to the earth settlement.

Jamieson makes the case for befriending the Ezwal and using them as an ally in the war against the Rull. To the people of Carson’s Planet, this is heresy because the Ezwal have killed many of them and the humans refuse to consider that they are intelligent. They are not eager for their planet to be a military base either. One woman on the council suggests the two of them scout out Carson’s moon which has an atmosphere and plant life to ascertain if it will provide a suitable alternative. Jamieson agrees to accompany her there, but parts by chiding the humans to reach out telepathically to the Ezwals.

Jamieson and Dr. Whitman (referred to in the text by Van Vogt mostly as “the woman”) to Carson’s Planet’s moon. Once there, Dr. Whitman launches their climate suits into orbit, effectively stranding them on the moon where they will freeze to death.

But Dr. Jamieson is a clever man and manages to find shelter and food and get them rescued.

Jamieson returns to Earth command and resumes his job as a diplomat. He tries to convince his superiors that the Ezwal are a race that they should treat intelligently. Instead of treating them as an intelligent race, humans go to Carson’s Planet and capture one. They are transporting it back to earth when the ship transporting it crashes into a wooded area on Earth.

The young Ezwal escapes. He is angry and bent on revenge. He must keep his thoughts contained because the Ezwal elders do not want it revealed to humans that they are intelligent beings capable of telepathic communication.

Jamieson learns of the ship’s crash and rushes to the area where troops are scouring the woods to find the escaped Ezwal. Jamieson contacts it telepathically to let it know it’s been spotted and the humans mean to kill it. The Ezwal is torn between staying true to his people and believing Jamieson has his best interest at heart. He finally decides to trust Jamieson and is rescued and returned to Jamieson’s office.

Later, Jamieson goes to talk to the operator of a remote mining colony about labor unrest and rates of payment. He meets the operator’s son who refuses to shake his hand, fearing that Jamieson is a Rull. While Jamieson is talking to him, he is knocked unconscious and transported to the mining colony where he learns the son is a Rull spy. He and the young man’s father kill the Rull spy. The contract is settled and Jamieson returns to Earth.

In the next chapter, Jamieson’s son is roaming about a local shipyard where the largest spacecraft in history is being built. He is approached by two Rull spies (disguised as humans) who want the boy to help them get past the bacterial security barrier. Diddy knows he’s being used by the Rull, but can’t act out, knowing they will kill him.

As he’s guiding the Rull to the research laboratory on the shipyard grounds, he receives a telepathic message from the Ezwal telling him there is a gun inside the building and at an opportune moment, he should seize it and kill the Rull. Diddy seizes his moment and is able to defeat the Rull and return safely to his parents.

A few months later, Jamieson is shipwrecked on a uninhabited planet. Shipwrecked near him is a Rull ship where the Rull commander is braced for one on one battle. It will be ten days before a rescue ship can arrive to save him. Jamieson and the Rull commander play a game of cat and mouse before Jamieson outsmarts and kills the Rull.

So ends the War Against the Rull.

I liked the individual parts of this fix up and wish I could have read them as individual stories, because they are not fixed up very well. The stories, Repitition (1940), Cooperate or Else (1942), The Second Solution (1942) The Rull (1948), and The Sound (1950) were published in the sci-fi pulp magazine, Astounding Science Fiction as stand alone stories.

It is quite easy to tell where the seams are. Van Vogt put little effort into the rewrite to concoct a novel from these unconnected stories. What emerges is a disjointed, difficult to follow tale with no character development or arc and no real plot line.

Van Vogt's penchant for doing fix up novels, some would argue, reduced his standing in the science fiction community. Those readers new to Van Vogt's work might pick up one of these fix up novels and wonder how this man ever got published.

As science fiction transitioned from the pulp magazine short stories and serials into full blown novels, some authors made the transition and some did not. Van Vogt wrote some good novels and many excellent short stories. He should have kept the two separate.

As a novel, The War Against the Rull is poor. Reading the individual chapters was great fun and takes one back to those days when pulp sci-fi was light years ahead of Hollywood in creativity.

Posted by Brian Schwartz at 5:06 PM