UR by Stephen King

UR
by Stephen King
Copyright 2009

In 2009, Stephen King was asked to create some content exclusively for the Kindle E-Reader which Amazon was marketing heavily as the next technological revolution that would change the way people read forever. He produced a novella about a haunted E-reader that introduced its owner to previously unknown works of great authors and alternative universes in which they exist. 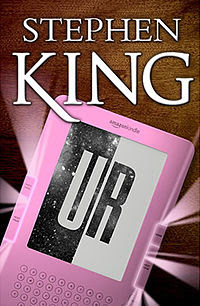 Wesley Smith is an English professor at a Midwestern college who has just broken up with his girlfriend who coaches basketball at the college. Smith is an inveterate reader whose girlfriend asked him, “Why don’t you read off the computer like the rest of us?”This remark and his ugly retort lead to their breakup.

Peeved, Wesley decides to show his girlfriend that he can contemporize. He purchases a Kindle from Amazon using his credit card. It arrives just a day later even though he did not pay for express shipping. He’s surprised to see that his Kindle was pink when (at that time) all Kindles were white.

He purchases a few of his favorite books and starts reading them. He starts exploring the Kindle’s functions and discovers the “Experimental” function which includes the MP3 player and web browser. On Wesley’s Kindle there is another experimental function called “UR.”

He clicks on this function and finds there are millions of URs. He picks one and looks up his favorite author, Ernest Hemmingway. He finds several Hemmingway novels never published. He downloads one and starts reading. The prose leave little doubt that the author is Hemmingway. The information also lists Hemmingway’s death as 1964 rather than 1961.

He also discovers that there are newspapers in each of these millions of URs. He starts reading them and discovers that each reveals a reality different than the one in which he exists. He is fascinated and frightened by it. He shares his discovery with a student and a colleague who are also intrigued by this unusual pink Kindle.

Curious about these unpublished books he’s downloaded as well as the UR newspapers to which he has subscribed, he checks his Amazon account to find out his purchase of the Kindle did not go through because he made a one digit error on his credit card. He wonders who is paying for his purchases.

He decides to explore the “UR Local” function. He reads the disclaimer that tells him using the UR Local function can have consequences for which there are punishments. He acknowledges the warning and starts reading future editions of the local newspaper. There, he learns that his ex-girlfriend’s basketball team is going to be involved in a horrible bus accident caused by a drunk driver. He decides he must take action.

Wesley and his student track down the drunk driver who will cause the accident. They follow her on her bar hopping exploits and Wesley confronts her at her final stop, preventing her arrival at the fateful intersection. The bus arrives safely and the team celebrates their victory in the championship game.

When he arrives home, he finds a bright red Cadillac parked outside his place. He enters his apartment and finds two men wearing bright yellow coats waiting for him. They are there to punish him for violating the terms of the UR Local agreement and interfering with the cosmos. Wesley has rocked the Dark Tower and altered the realities of many universes they tell him.

Wesley argues that his actions were part of destiny because the Kindle came to him from somewhere with the functions put at his disposal. The notorious Low Men in Yellow Coats decide not to sanction Wesley, but take his Kindle to prevent him from doing more harm to the cosmos. Wesley is left to ponder the cosmos.

My first impression was this was a thinly veiled commercial for the Kindle. Amazon asked for the story to be written and King delivered a story that showcased the features and convenience of Amazon’s E-reader. I tried to not let that turn me off from otherwise enjoying the story.

I was thrilled to learn that this story tied into the Dark Tower mythos. The image of the Tower appears when Wesley first logs onto the UR function. Fans who’ve read Hearts in Atlantis will no doubt recognize the Low Men in the Yellow Coats as the low level functionaries of the Crimson King.

The story is average. It’s a standard changing the future tale (which King would explore much more deeply in 11/22/63). Other than the Kindle commercial, there’s no new riff on the old formula.

As usual, King develops his characters and settings well. We come to learn that Wesley is an average instructor at an average college that has no real academic standing. There’s nothing extraordinary about Wesley’s friends and colleagues. King obviously wants us to know that this is an average man with an extraordinary device. In a novel, he would have been more subtle. With fewer words with which to work, he just lays it out.

The story is well paced and despite being a tired concept, King entertains. It will never be held in the same regard as his great novellas from Different Seasons or his good ones in Full Dark, No Stars. It is, however, superior to The Library Policeman, The Sun Dog and The Langoliers from Four Past Midnight.

The story is available for $.99. It’s not King at his best, but it’s worth every bit of one dollar.