A Game of Thrones: Book One of a Song of Ice and Fire

A Game of Thrones: Book One of a Song of Ice and Fire
By George R.R. Martin
Copyright 1996

In 1996, George R.R. Martin embarked on what has become a epic tale of royal intrigue, brutality, sex, and magic. A Game of Thrones was the first book of what will eventually be seven lengthy tomes telling the story of the various families and partisans battling for the throne of Westeros. 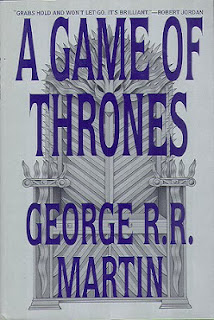 The story opens not in a castle, but deep in the woods. A party searching for “Others” is set upon and slain by evil, magical creatures. These men were dispatched from The Wall which we learn guards the northern reaches of The North region of Westeros.

We are then introduced to Eddard “Ned” Stark who is Lord of Winterfell, the largest hold in the northern region. He is overseeing the execution of a man who went AWOL from his lifetime appointment as a member of the Night’s Watch who guard The Wall. He has invited his children to watch the execution to teach them about duty, honor, and the importance of a ruler meting out the justice he prescribes.

On the way back to the castle from the execution, the group comes upon a den of six direwolf pups. The wolf is the symbol of the House of Stark and Ned’s children are each given a direwolf to raise as their own pet.

Ned has six children, but his oldest is a bastard and not in line for the throne. Jon lives in the castle and is treated as a full brother by his half brothers and sisters. However, his father knows he is not an heir to the lordship of the kingdom and Ned’s wife treats him as if he didn’t exist. Jon Snow is determined to leave the house of Stark and become a member of the Night’s Watch.

Shortly after Ned’s return to his castle, he learns that King Robert Baratheon is coming to visit. He plans to ask Ned to assume the position of Hand of the King which is the King’s right hand man. The previous hand, Jon Arryn, died suddenly and seemingly without cause. Arryn was Ned’s brother in law.

King Robert arrives with his wife, Cersei of House Lannister accompanies him with her twin brother and younger brother who is a dwarf. Ned and Robert reminisce about their battles in overthrowing the old king and placing Robert upon the throne. Meanwhile, the Lannisters are up to mischief.

Bran Stark, Ned’s middle son, is a natural climber and enjoys climbing the exterior walls of the castle. One day, he climbs and looks into the Queen’s bedroom window. There, he sees the queen engaged in incestuous sex with her twin brother, Jaime Lannister. Jaime sees the boy and gives him a push from the window. He falls to the ground and is badly hurt. He ends up in a coma.

Before Ned leaves, Lady Catelyn Stark, Ned’s wife, receives a note from her sister, Lysa Tully. Lysa was married to Jon Arryn and claims that the previous Hand of the King was murdered. Catelyn tells Ned who promises to investigate when he arrives at the palace. Ned departs, taking his daughters Sansa and Arya with him, heading south to King’s Landing and the royal palace. Left behind are Ned’s sons, Robb who is the oldest of his children with Catelyn and his heir, Bran who is too badly injured to travel, and Rickon, who is just four years old.

Meanwhile, in the eastern reaches, the last heir of the old king, Viserys Targaryen, is scheming to return to power. He has betrothed his 13 year old sister to Khal Drogo, the leader of the Dothraki horse warriors. The marriage is consummated and Daenerys is pregnant with Khal Drogo’s child. They begin the plot to restore a Targaryen to the throne in Westeros.

Shortly after Ned and the girls depart, there is an assassination attempt on the helpless Bran. His direwolf and his mother thwart the attack and kill the would-be assassin. Catelyn recovers the dagger used in the attack.

Fearing that her husband’s and daughters’ life might be in danger, she decides to travel to King’s Landing by sea. She arrives before her family and consults with her old beau, Petyr Bellish – also known as Littlefinger who now serves as court treasurer. He identifies the dagger from the attack as one belonging to Tyrion Lannister, the dwarf brother of the queen. Catelyn stays in King’s Landing long enough to visit her husband and daughters before heading north by land toward home.

Ned settles into his duties as the King’s Hand. His daughters find their own activities to entertain them. Sansa is very much caught up in the trappings of royalty and is eventually betrothed to the twelve year old heir apparent Prince Joffrey. Arya is very much the tomboy and takes up sword fighting as a hobby.

Ned finds that King Robert is very much an absentee ruler who prefers drinking and hunting to the responsibilities of the crown. Ned is left to run the kingdom and finds time to investigate Lysa’s claim that her brother was murdered. In his research, Ned learns (as Jon Arryn did before him) that Joffrey is not the king’s son, but the child produced from the queen’s incestuous relationship with her twin and therefore not the heir to the throne. Dangerous knowledge indeed for the Lannisters are conspiring to take the throne for their own.

After her meeting with Littlefinger, Caetlyn and her small entourage head back north via land. On their way, they encounter Tyrion Lannister and take him prisoner. Caetlyn is determined to see him punished for the attempted assassination of her son. They head for Eyrie, a distant land of Caetlyn’s birth and where her sister rules.

When they get there, Caetlyn’s sister, Lyssa, is eager to put Tyrion to death because she knows the Lannisters murdered her husband. However, Tyrion demands the right of trial by combat. One of Caetlyn’s own hired men agrees to be Tyrion’s champion. He defeats Lyssa’s man and by law, Tyrion has earned his freedom – the gods having judged him innocent by having survived the trial.

Tyrion’s father, Tywinn Lannister has no love for his undersized son, but cannot allow the affront of the abduction to go unpunished. He declares war and moves his army north toward Eyrie.

Meanwhile, King Robert meets with an unfortunate hunting accident. When it comes time for the heir to assume the crown, Ned makes it known that Joffrey is not the rightful heir. He is arrested and his men are slain. The twelve year old Joffrey assumes the throne as King of the Seven Kingdoms. As his betrothed, Sansa stands to be queen when she and Joffrey are of age to be wed. Arys learns of the plot against her father and flees to his tower to find that he’s been imprisoned. She is now a fugitive, hiding out in depths of the castle.

Ned agrees to plead guilty to treason to spare his daughters lives. Joffrey promises Sansa that he will be merciful. However, when the time comes to pronounce sentence, Joffrey orders Ned beheaded. Sansa is forced to watch as her father is executed and she is betrayed and trapped in the grips of the Lannisters.

Robb, now the lord of his father’s lands in the north, assembles and army and heads south where he meets the Lannister’s army and defeats them. Robb and his allies proclaim him King of the North

While all of this transpires in the south, Jon is on the Wall at the northern reaches of the kingdom. He learns of his father’s death and must decide if he will desert his vowels of allegiance to the forces who guard the wall and help avenge his father’s death. . He leaves but his friends catch up with him and convince him to return. He will soon be a part of a detachment of troops who will venture north from the wall in search of Jon’s uncle who disappeared with his men while hunting the mysterious Others who dwell in the forest beyond.

Renly Baratheon – the king’s youngest brother – decides to pursue the throne since his older brother won’t. He wins the loyalty of the house of Tyrill through an arranged marriage and prepares to march on King’s Landing to seize the throne.

Meanwhile, Daenyrus is very pregnant in the east and about to give birth. Before she does, an attempt is made on her life. To avenge the attempt, her husband, Kahl Drogo attacks Westeros and is wounded. He dies and his men desert to join other armies. Daenyrus is left with few men and women in her army, but still bears the child with the dragon blood whom she deems the rightful King of the Seven Kingdoms.

A Game of Thrones ends with the kingdom involved in a massive civil war with several families vying for the throne held by the demented child king, Joffrey who is a puppet for his evil mother and the Lannister family.

Martin spins a complex tale of intrigue, warfare, betrayal, and mysticism. It is written from many points of view and each of the characters – especially the devious Tyrion – are developed wonderfully. One must read carefully to track the shifting loyalties and pay close attention to the maps to understand where each army is located and what their next goal is.

This is not traditional fantasy as fans of Tolkien know it. There is little, if any magic. The dragons are all gone, having been slain by the Baratheons. What emerges is a medieval tale of intrigue rather than high fantasy.

The book was first published in 1996 and did well. Sequels have been published every three years since and they have also sold well. However, when HBO decided to make a television series based on the books, sales skyrocketed and all of the books made the best seller list and the series has emerged as the most popular since Robert Jordan’s Wheel of Time series.

In future books, we know that some of our favorite characters are going to die. Martin is notorious for this. I have not progressed beyond the first book, but those who have read the series tell me it is frustrating to see their favorite characters die, but it makes for interesting reading because Martin’s story is so unpredictable and unorthodox.

Complex characters, complex backstories and complex plots make A Game of Thrones one of the finest “fantasy” books I’ve ever read. I look forward to taking in the entire series.

Posted by Brian Schwartz at 1:23 PM

Labels: A Game of Thrones, A Song of Ice and Fire, George R.R. Martin