Introduction by Robert Asprin
Hakiem the storyteller lounges in the Vulgar Unicorn, noting that its clientele has turned seedier since the disappearance of its proprietor, One Thumb. He tries to remain unnoticed in the crowd, gathering tales he will share for coin later. 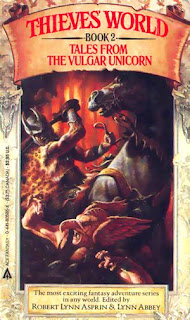 Not a story as much as it is an mood setter, and as the title states, and introduction to the book.

Spiders of the Purple Mage by Philip José Farmer
A downtrodden woman is on her way home from work in The Maze when a dying man comes upon her and tells her he’s hidden an expensive and stolen jewel in a piece of cheese that was eaten by a rat. The man is covered with spider bites. The woman’s husband hears the story and trades its telling for drinks, which starts a great rat hunt in the city. She is then approached by a mysterious man who tells her the jewel was stolen from a mage who betrayed his religious order. If she’ll help him get into the mages fortress on a remote island, she can have whatever riches she can carry out while he’ll mete out justice. The two confront the mage’s wicked spiders and other minions in their quest.

This story reads like an old fashioned Dungeons and Dragons dungeon crawl. New monsters, traps, and obstacles at every turn. It was great fun. Asprin allowed Mr. Farmer’s story a full 29 percent of the book. This one is long.

Goddess by David Drake
Regli – a Sanctuary nobleman – waits impatiently outside his wife’s room as she endures a second day of labor. His brother in law arrives and is permitted to enter the room to see his sister – much to Regli’s consternation. After the brother in law, Samlor, Regli enters the room and triggers a backdraft. The room has been set on fire. Regli notices that his bride has been stabbed in the abdomen and bled out before the fire started. Meanwhile, Samlor is headed for the catacombs under the city to find a demon who impregnated his sister.

This story shifted gears abruptly and the transition from Regli’s anger at finding his wife dead and Samlor’s underground exploration was hard to understand. At one point, I thought maybe I was reading flashback. The story was too wordy in telling the reader, “he made a right, then a left, and circled around. . .”

The Fruit of Enlibar by Lynn Abbey
Illyra, the half-S’Danzo is visited by her long lost half brother who was with her when their parents were murdered when they were children. He returns to her with her mother’s jewelry and to ask a favor. He wants her to use her powers to move backward in time and decode the magical runes on a shard of pottery. Those runes hold a major clue in the development of a new kind of steel that will make swords more powerful.
Illyra is one of the more intriguing characters inhabiting Santuary and Lynn Abbey has spun her second excellent tale surrounding the S’Danzo. The story is well paced and the development of this new steel and who may wield it promises more great stories in the near future.

The Dream of the Sorceress by A.E. Van Vogt
Many year after the unsolved murder of his father, a Sanctuary healer’s home is invaded. He learns that whomever was in his home exited by simply passing through the door rather than opening it. After consulting a S’Danzo, Stulwig learns that he is caught between warring gods in a lover’s spat.

This story was more cerebral than most in Thieves’ World and was a refreshing change up from the swords and sorcery encountered so far.

Vashanka’s Minion by Janet Morris
Tempus Thales is an immortal mercenary working on behalf of the god of war, Vashanka. His latest mercenary job finds him employed as one of the Hell Hound guards in the employ of the prince. He is dismayed to find that his god, with whom he often quarrels, has spontaneously erected a temple in the Maze of Sanctuary. In that temple, men and women are able to purchase the magical weapons and devices they need to kill more effectively.

This story starts and never finishes entirely too many subplots. While Morris does a nice job of introducing the reader to Tempus who figures in many future Thieves’ World stories, she never really gives us a great deal of insight into the contentious relationship between Tempus and the god he serves.

Shadow’s Pawn by Andrew J. Offutt
Tempus, desperate to retrieve many of the items sold out of Vashanka’s Weather Shop is desperate to retrieve them – particularly the wands. He enlists the aid of Hanse – Perhaps the best thief in Sanctuary to help him. Hanse makes his first attempt and is struck by a wand of fear, causing him to flee. He encounters a S’Danzo who is able to calm him and restore his sanity. Later, he is able to steal a wand of enscolment and return it to Tempus. In exchange for helping Tempus, Hanse has recruited the immortal, mercenary hell hound to accompany him on a treasure hunt.

This second story improves my opinion of the first. It appears that the final three stories in the book are but chapters in long short story. We see now that the weapons initially made their way into the hands of both good and evil. But they are all sure to make their way into evil hands once word of their existence hits the streets.

To Guard the Guardians by Robert Asprin
The commander of the Hell Hounds strikes a deal with the slave trader, Jubal, to stop the murders of Jubal’s spies and henchmen in the city. The Hell Hound, Tempus, hates Jubal and kills his men at every opportunity. The Hell Hound commander asks in return that Jubal shut down the mad scientist conducting horrific experiments on his human slaves. Both men find creative ways to fulfill their bargain.

This was easily the best story in the book and Tempus has developed into a really complex character that will be featured over and over again through the series.

Essay: The Lighter Side of Sanctuary by Robert Asprin
At the end of the book, Asprin laments that most of the stories contained in the first two volumes of Thieves’ World are dark and without humor. So, to lighten the mood, he creates a chamber of commerce marketing piece for Sanctuary that is mildly funny.

Posted by Brian Schwartz at 1:01 PM