Paul wakes early and wants to make morning constitutional, but his special friend, Eileen tells him that Brad Dolan is lurking in the kitchen. She creates a diversion for him and Paul is able to get his two pieces of toast and makes his way to the shed. We still don’t know why it is he goes there. 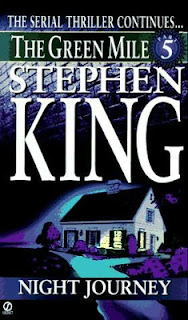 He picks up his narrative of the events of 1932 with the team of death row guards prepared to spring John Coffey from the Green Mile and take him to Warden Moores’ home where they hope he can heal the warden’s wife who has a brain tumor eating its way through her.

In talking to Paul, the other guards discover that Paul believes Coffey is innocent. This is based on a couple things. Coffey can’t tie a knot, yet his lunch was retied when he was found with the two girls. Secondly, the hounds that pursued the killer got confused when they arrived at the murder scene. Two wanted to go one way, two the other. Once they were given the scent of the girls’ nightgown, they pursued the girls. The killer went one way, Coffey discovered the girls’ bodies and went the other.

Most importantly, it’s what Coffey said when discovered. He said, “I tried to take it back, but it was too late!” The arresting officers took that as a confession. Paul reminded the others of what Coffey said when he demanded that Mr. Jingles be brought to him. He said, “Hurry boss! Before it’s too late!” Coffey was trying to take the hurt out of the girls, but they’d already died.

Before Coffey can be moved, the annoying Billy the Kid must be incapacitated. Paul slips him a soda spiked with morphine. Percy is dispatched to the restraint room to clean it up and to write his report on the botched execution the night before. Once they are sure the rest of the Mile is squared away, the guards move in on Percy.

They tell Percy he’s being punished for his bad behavior. They put him in a straight jacket. Percy thinks he’s going to be fed to the crazy Billy the Kid, but Paul and the gang just lock him up tight and quiet in the restraint room.

After the Mile is clear, Dean is left behind to mind the store while Paul, Brutus, and the others smuggle the gentle giant off of death row and out of the prison to a waiting pickup truck. They travel 25 miles across mountain roads to the home of Warden Moores.

It’s 2:00 AM, but Warden Moores is still awake. He greets his night visitor with a pistol cocked and ready to fire (it’s the mythical, never made Buntline Special that has appeared in a few King stories). Paul talks him down and they take Coffey inside.

There, they find Melinda Moores in a rapidly deteriorating state. She is now but a wraith waiting to pass on. Her mind gone, she spouts profanities and shocking obscenities at the men around her. Coffey is nonplussed. He bends over her, looks deep inside her eyes and says he sees the trouble and he can help. He puts his lips to hers and they engage in what appears to be a passionate kiss. What is really happening is John is sucking the disease from her body.

Finally, Coffey collapses gagging and gasping for breath. He can’t exhale or cough up the poison inside him. The guards see to John, helping him to regain his breath while Paul and Hal Moores look after Melinda. Her last memory is of going to get the head X-ray. She recalls nothing after that. Paul assures her it was all clear. She volunteers to fix the men some tea and gets out of bed. Then she spots John Coffey, slowly recovering in the corner of the room.

She asks him who he is. He responds, “John Coffey.” She says, “Like the drink, only spelled differently. I dreamed about you.” (Where have King fans read that last sentence before?)

Hal and Melinda Moores are left behind to celebrate their miracle while the guards hustle the ailing John Coffey back to Cold Mountain Prison. They arrive and get Coffey back into the prison. Harry reminds him the business is not done. There’s still Percy Wetmore to deal with. The book ends with Paul telling the reader, as it would turn out, their evening was far from over.

King has set the stage for the drama that will unfold in the final installment, Coffey on the Mile. Coffey is a divine being, without malice. He's a simple man whose only desire in the world is to help others.

The reader is left wondering: will the guards and/or the warden act to save Coffey? Paul Edgecombe all but knows he's innocent of the charges against him. Warden Moores knows nothing of the specious evidence used to convict Coffey. He only knows that the convicted rapist and murderer of children has saved his beloved wife.

The cliffhanger is one of King's most dramatic moments of his writing career. Few characters in King's universe engender the sympathy that John Coffey garners. In a novel, instant gratification is there. The reader only need turn the page to ascertain Coffey's fate. Serialization made this impossible. Readers in 1996 were forced to wait a month to learn Coffey's ultimate fate and how Paul Edgecombe would reconcile whatever actions he decided to take.

In John Coffey, King has created perhaps his most memorable character. This is remarkable when one considers the hundreds of characters King has developed over his career and the thoroughness he employed in developing these characters through complex and deep backstories and expansive arcs.

Coffey is a simple character. He's one dimensional. Although his gifts are revealed through the narrative, he undergoes no change through the course of the story. His backstory is a mystery.

The essay question at the end of Night Journey reads, “The narrator, Paul Edgecomb, has a strange dream on the way back from Warden Moores’ house. What do you think the dream means?”

I’ll leave my analysis of this very pertinent question for the summation of the story.