The Bad Death of Eduard Delacroix: Book Four of The Green Mile By Stephen King

The Bad Death of Eduard Delacroix: Book Four of The Green Mile
By Stephen King
Copyright 1996

The title of installment four of The Green Mile presages an ugly end for the raping, murdering Cajun on the Mile. In unveiling the details of Mr. Delacroix’s ugly demise, King does some of the finest writing he’s ever done. 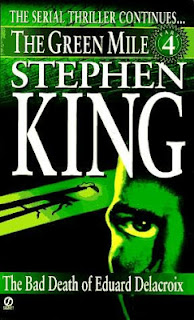 The book opens in the present tense. Paul takes a morning constitutional from the rest home through a small wooded area to an equipment shed on the grounds of the rest home. He takes with him two pieces of toast. His errand is not revealed to us.

On his return, he meets his current nemesis, the mean, ugly orderly, Brad Dolan who delights in small, petty torments of Paul. He grabs Paul by the wrist and tells him he means to find out what Paul does when he visits that equipment shed. Having been preparing himself to resume his memoir, Paul can’t help but make the comparison between Brad Dolan and Percy Wetmore.

Paul resumes his narrative of life and death on the Green Mile. We pick up with Percy Wetmore crushing Mr. Jingles under the heal of his boot and Delacroix’s anguished cries of grief. The guards on the Mile are stunned by Percy’s callous deed. Mr. Jingles lies in a pool of blood, his body broken and twitching as its life force wanes.

As Paul and the rest are berating Percy, John Coffey asks Paul to bring Mr. Jingles to him. Paul picks up the crushed mouse and takes it to Coffey. Coffey cups his hands around the mouse and breaths in deep from the pocket inside. He releases Mr. Jingles, just as frisky as the day he arrived on death row. He then retreats to his cell where he exhales a black cloud of pestilence he’s drawn from the mouse.

The others are entirely stunned by what they’ve seen. Paul is once again amazed. But having been the beneficiary of a John Coffey miracle he’s not as stunned as the others. Delacroix is relieved to have his friend back to spend time with him on his last night of life.

Paul, Dean, Brutus, and the rest have had it with Percy Wetmore. They lay down the law with him. After he gets to stand front and center before the audience at Delacroix’s execution, he’s going to file those transfer papers to get him to another institution. If not, they’ll make his life miserable – connections or no connections. Percy resentfully agrees, still stunned that he did not hurt the mouse despite feeling its bones grind under his boot.

The day comes for Delacroix’s execution. He’s led to the death chamber and strapped into the chair. An epic electrical storm rages outside. The mood is tense. Paul knows something isn’t right. Delacroix is strapped in. Percy places the hood over Delacroix’s face and places the electrode on his head. He reads the executioner’s mantra and orders the switch thrown. Horror ensues.

King is masterful in detailing the horrid account of Eduard Delacroix literally roasting in the electric chair. In a final, cruel prank on the man he despised so much, Percy did not soak the sponge for the electrode in the saline solution, reducing conductivity. Instead of being electrocuted, Delacroix is burned alive in the chair.

Despite a desire to stop the execution and the horrific, inhuman suffering, Paul knows that the current must continue to its end. The mask catches on fire, revealing Delacroix’s burning face, eyes popped from their sockets. He’s still alive and screaming. Audience members panic. The doctor faints. But the current flows until Delacroix is mercifully dead.

An assistant warden is on duty that night and wants to know how the team so badly botched the execution. Percy insists that he did not know that he was to wet the sponge. None of the other guards contradict him. When the assistant warden leaves, Paul, Brutus, and Dean tell Percy if he doesn’t get those transfer papers filed, they just might let Wild Bill have a go at him.

Paul awakes from his fitful night’s sleep the next morning and talks to Warden Moores. He sticks to Percy’s alibi and inquires about the warden’s wife. Warden Moores says she’s slipping away. Her strength is gone and her behavior has changed, leading her to spout the most disgusting profanities and the most bizarre times. Paul can tell that his friend is suffering badly. He has an idea.

Paul summons the Green Mile gang to his house where he lays out his plan. He wants to take Coffey off the Mile, out of the prison, to Warden Moores’ house. He hopes that Coffey can perform a miracle for the warden’s wife. After debating the pros and cons of the idea, the men talk logistics. The plan is set. The book ends with the decision made that could end their careers and land them in prison, or save the life of a woman whom Paul Edgecomb adores.

As I've noted, chronicling the death of Eduard Delacroix in the electric chair was some of the finest writing Stephen King ever did -- comparable to the Larry Underwood's terrifying trip through the Lincoln Tunnel in The Stand. Paul's horror at Delacroix's unspeakable torture as he is slowly roasting comes through. King meticulously details all that is going on around Paul. The doctor faints. Witnesses vomit and pass out. Guards look on with abject disbelief.

While one might think that terror was King's goal, it was not. The reader is horrified, but the greater emotion is helplessness. Paul is helpless to stop the horror. Compounding Paul's sense of helplessness is the fact that he has the physical ability to stop it. He can order the power cut and end everyone's suffering -- except Delacroix who is beyond help. But duty is duty and Paul knows that while stopping the current might end his own unspeakable horror, it will do Delacroix no good. Paul summons the courage to continue the current and finish the execution. King makes the reader feel Paul Edgecomb's excruciating feeling of being powerless to stopping the abomination occurring before him.

The plan has been hatched in the next installment, Night Journey, the guards will risk their careers and their lives to help a friend and perform a miracle.

The essay contest question at the end of The Bad Death of Eduard Delacroix is: “Brad Dolan, the orderly at Georgia Pines, reminds the narrator of Percy Wetmore. What similarities to the two of them share?”

Posted by Brian Schwartz at 7:23 AM