Daniel H. Wilson, a professional engineer and roboticist, educated at M.I.T., tapped his expertise and years of experience to write his first novel. Robopocalypse documents the rise of man made robots under the leadership of an artificial intelligence that has dubbed itself, Archos. 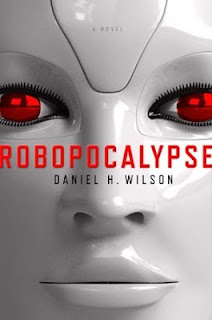 Wilson takes an unusual approach by starting his book at the end. The war between robots and humanity is over. Humans won, but at great cost. The narrator of the story, Cormac Wallace, gains access to The Cube where all of the intelligence from the war is stored. He uses this device to tell the story of several characters, each of which play a major role in the war.

From the end, Wilson takes us to the beginning. A scientist accidentally unleashes upon the world wide network of computers the artificial intelligence Archos who is housed in a deep cavern in Alaska. Archos determines that the human race needs to be crushed to preserve the biodiversity of the earth.

There is disorganized resistance at first. A computer hacker and nasty prankster in England manages to talk to Archos and learn what he’s about. Despite his lifetime of mischief on the Internet and over the cell phone, Lurker decides to make the ultimate sacrifice. He brings down the antenna that allows Archos to access satellites. Before robots slaughter him, he manages to get a message to other humans that they are now free to use satellite communications.

Young Mathilda Perez, 10, is the daughter of a congresswoman who is trying to pass legislation to regulate robots and artificial intelligence. One day, Mathilda has a strange encounter with one of her toys. The toy tells her what is to come of humans when the robots start their war. Later, she, her mother, and her brother are taken hostage by the robots and placed in a work camp. A robot performs surgery on her eyes. These new eyes leave her blind to most living creatures, but she can see robots before anyone else can. She becomes a valuable asset to the resistance after she escapes.

A Japanese robot repairman has constructed a female robot with whom he has an intimate relationship. Knowing the nuts and bolts of robots, he immediately recognizes the problem with his electronic paramour and is able to free her from Arhcos’ control. She then transmits a signal to all humanoid robots that free them from Archos’ control. This new class of robots, known as the Freeborn, form an alliance with humans.

Cormac Wallace and his brother, Jack, escape New York City and head for an Oklahoma Indian reservation. There, the Brightboy Squad is formed. Military robots are pacified and put to use by the humans and the retaliate against the robots. They eventually make their way to Alaska where they find Archos. Cormac Wallace takes Archos off line and the war is over.

Robopocalypse has no real narrative structure. It is told in a series of short stories from the points of view of the main characters – most of which had no real interaction with each other. Most of the chapters would work as stand alone short stories.

It’s structure reminded me very much of I, Robot. In that book, Isaac Asimov packages what were stand alone short stories published over the course of a decade into a chronological examination of the rise of robots from primitive, bulky, non-intelligent machines to those who eventually benignly gain control of the earth’s economy, natural resources, and government.

The robots in the two stories were much different. In I, Robot, Asimov establishes the Three Laws of Robotics which make robots benign. This concept of robots became the archetype for robot literature and pop culture for half a century. Wilson turns that on its head. The robots of Wilson’s world have no compunction about harming humans.

I read I, Robot simultaneous to reading Robopocalypse to compare the styles and content. Asimov and Wilson have diametrically different writing styles and their conception of robots is diametrically opposed. But reading the two together made reading these books a more rewarding experience than having read them separately because they are so different in their conception of the robot.

This book was the book of the month for my book club and one member said this was precisely Wilson’s goal – to challenge that archetype. For any author to challenge archetypes is risky. A few, like Richard Matheson do is successfully as he did the vampire archetype in I Am Legend. Most readers of genre fiction like their archetypes left intact. Wilson took a risk in authoring this book. He pulled it off quite well.

I enjoyed the book, but it lacked something. The short story within a novel format made it easy for me to put the book down – sometime for days – without feeling compelled to pick it up again. A flowing narrative would have made for more compelling reading for me.

I also think that Wilson left a lot of story on the table. His story is good. But it could have been epic. So much of what happened during the war was told in just a few sentences. Fleshing out the human struggle with much more character development and many more scenes would have made for the epic tale that I love so much.

The English professor in our book club said Wilson’s approach to writing was probably exactly that of Fyodor Dostoyevsky in writing Crime and Punishment. I’m embarrassed to say I’ve never read the book. But according to him, Dostoyevsky literally started at the end and wrote the novel backward.

Keeping in mind that this book was written by an engineer (who for all their brilliance are usually lousy writers) who was writing his first piece of fiction, the book is amazing. Perhaps the epic story I so desire would be beyond the reach of a first time author. The king of the epic genre tale, Stephen King, started out with the short novel, Carrie. It wasn’t until his fourth book, The Stand, that King constructed his first epic tale.

Well read fans of science fiction who have a strong knowledge of the genre’s archetypes will enjoy this book immensely. The non science fiction fans in our group all seemed to enjoy the book as much as the hard core sci-fi fans in the group. Despite what I perceive as its shortcomings, the book’s appeal seems to be universal to readers of all kinds and is worth the time to take in its 347 pages.