Having completed his “The Evil That White Men Do” phase, Stephen King revisited the prison novel. The success of the movie, The Shawshank Redemption showed that King could write a compelling narrative of prison life. But this was to be no novella. Nor was it a novel. It was a serial, published in six “chap book” installments. 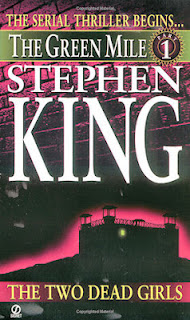 In introducing the first book, Two Dead Girls, King harkens back to Charles Dickens who published many of his works via serialization in magazines popular in his day as well as in the chap book format. He says the pressure of starting and publishing the opening of a story while not knowing how it would end was a new challenge for him.

Serialization has been done over and over since Dickens did it. Edgar Rice Burroughs and many of the early 20th century science fiction and adventure novelists serialized their work in magazines. Later, science fiction writers such as A.E. Van Vogt would collect previously published short stories and rewrite them, adding to the narrative to provide a common link to make them into a novel in a practice known as the “fix up.”

Book 1: Two Dead Girls
King opens his story with the book, Two Dead Girls. Here, he introduces his main characters and the primary character’s backstory. Very little of the plot is brought into play, although there is a great deal of foreshadowing of some horror to come.

Paul Edgecomb, a guard at a Cold Mountain Prison during the Great Depression, serves as the narrator. Edgecomb is the guard in charge of the prison’s death row, known as the Green Mile because of the green tile that lines the walls from the cells to the death chamber. He has several guards who work for him, most of whom are competent, loyal, and decent men.

Then there is Percy Wetmore. Percy got his job because the governor is his nephew. Percy is a cruel man, small in stature and petty in character. He enjoys tormenting the inmates on the Mile and being a pain in the ass to his colleagues and their supervisors.

Edgecomb is about to receive a new inmate. His name is John Coffey and he is an enormous black man who was convicted and sentenced to the electric chair for raping and murdering twin 10 year old girls. Paul can scarcely believe the size of the Giant that Percy and guard Brutus Howell bring into the block. As they walk in, the obnoxious Percy shouts to all who can hear, “Dead man walking here!”

Pissed at Percy’s need to torment the doomed, Paul orders him off the Mile. Percy is angry and humiliated. Guard Brutus “Brutal” Howell warns Paul that there will be hell to pay for making Percy angry. Paul, miserable because of a painful bladder infection and intimidated by the Goliath standing before him, is not worried about those consequences at that point.

Paul puts John Coffey “sounds like the drink, but spelled differently,” into his cell and explains the rules to him. Coffey is a soft spoken, simple man who seems to be benign. The towering, powerful figure asks Paul if a light can be left on because he is afraid of the dark.

Paul Edgecomb is ordered to the warden’s office. We learn that the warden’s wife is ill with chronic migraines. Paul is fond of the warden and his wife and asks about her health. This diffuses the tension some as the warden reminds Paul that he has to get along with Percy for all their sakes. Paul promises to make it work with Percy as long as it takes. Percy, the warden tells Paul, has applied for a position at another prison and will be transferred soon.

Coffey joins Eduard Delacroix on the Mile. Delacroix raped and murdered a woman, then to cover up his crime, started a fire that killed several other people. His time is short as his time to “ride the lightning” approaches. Delacroix keeps a pet mouse that is unusually tame and exceptionally intelligent. The mouse, we learn, will become a central figure in the story and King gives us extensive backstory on the arrival of “Mr. Jingles” on the Mile.

Two Dead Girls raps up with the guards on the Mile learning that they are getting yet another new inmate – a bad character who calls himself Billy the Kid. Billy the Kid is going to be trouble and trouble on death row is always bad trouble.

The main characters – including the mouse – are introduced and developed. We learn from Paul’s narrative that Eduard Delacroix is going to die badly. But we don’t know how. The story will move forward in the second volume, The Mouse on the Mile.

At the end of each book, King poses a question to his readers. Readers are invited to submit 50 word essays answering the questions. The best essay will win an autographed copy of The Green Mile Manuscript. The question at the end of Two Dead Girls is, “Why does the mouse, Mr. Jingles, choose Eduard Delacroix as his special friend?”

Through narrative, King introduces the principles in his prison drama. Through foreshadowing, he lets us know at least one horror to come. Next will come the backstory of the Green Mile, the guards who secure it, and some of the inmates who pass through.

Posted by Brian Schwartz at 4:17 PM