Son of Celluloid
An escaped con and cop killer is on the run from police. He’s been shot in the leg, but that’s not his greatest pain. His stomach is hurting him immensely. He knows its cancer, but doesn’t want that to be the cause of his death. He escapes to a crawl space under a theater where he bleeds out and dies of his wound. The cancer still lives and takes on a life of its own. One evening, after a movie is over, two patrons, a female usher, and the theater manager are in the theater. The female patron is waiting for her boyfriend who is in the lavatory. The theater manager goes in to check on him and finds himself in a shootout with John Wayne. He survives to get out, but the boyfriend is dead. The girlfriend is led off by a large bunny like out of the movie, Harvey. The theater manager is lured into a confined space by the late, great Marilyn Monroe who seduces and kills him. The sole survivor, the female usher is tried for the murders and found not guilty. She knows that the cancer has entered the body of the female patron and is roaming the country, spreading its evil. She tracks it down. 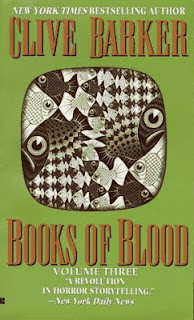 The fantastical elements of this story are excellent. A guy steps into a filthy restroom and finds John Wayne pissed off about him taking a leak on his street. Marylin Monroe getting all raunchy to seduce and kill him works wonderfully. The whole idea of a tumor taking on a malevolent nature doesn’t work so well.

Rawhead Rex
An ancient evil is awakened when a farmer removes a sunken stone from his field. A gigantic humanoid creature with large claws, large teeth, and a taste for human flesh is unleased on a British village to kill and pillage at will. The police can’t help. The church can’t help. But perhaps a new immigrant can.

Written with Barker’s usual lack of restraint, Rawhead Rex is a lot of fun and perhaps the best story in this book. The monster, Rawhead, is as menacing as they come. Parts of the story are written from his point of view and he is truly evil and depraved. Barker knows no sacred cows and adheres not to conventional mores, making the first reading of any of his stories and adventure.

Barker authored a screenplay based on Rawhead Rex and it was made into a movie in 1986. It is not held in high regard.

Confessions of a (Pornographer’s) Shroud
An innocent accountant is set up to take the fall for a large scale, mob run, pornography ring. He takes out a few of his enemies before the mob gets to him and takes him out. But so strong is his lust for revenge that his indomitable spirit is transferred from his body to the sheet that covers him in the morgue. He shapes the sheet into something resembling a human body and sets out to take out the top dog in the mob.

This was apparently supposed to be a parody or dark humor with an honest to goodness sheet-clad ghost. I didn’t find it particularly humorous, but it stands as a well written revenge tale.

Scape-Goats
A boat containing four young, horny adults on a party cruise beaches itself on an uncharted island. One couple goes ashore where they find, at the top of the peak of the island, three sheep confined by a low stone barrier. On the return to the boat, one of them is killed when stones start flying of their own accord from the island. The island then attacks the boat and the other couple aboard, sinking it and killing them. One woman manages to escape with the island’s “caretaker” who tells her the true nature and purpose of the island. She finds, in the end, the island and its residents are quite purposeful.

Barker really blew it with this story. It was a fantastic, original concept. However, there is absolutely no backstory which would have made the story oh so much more haunting. Events are disconnected and seem to have no bearing upon each other or the story. Instead, it turned into a half baked chase story. It was supposed to be horrifying, but in order to be horrifying, the horror usually requires a scary backstory.

Human Remains
A gay prostitute picks up a john and goes home with him. When they get back to the apartment, it becomes clear that they are not alone because somebody is upstairs, hammering on the walls, demanding attention. The john goes upstairs and after a few minutes, the prostitute follows. He finds a statue immersed in murky water in the bathtub. He leaves the apartment. A few days later, the prostitute is working when he’s approached by a pimp with whom he’s shared a peaceful coexistence. The pimp accuses him of maiming one of his prostitutes and a physical confrontation ensues. The prostitute is just about to be killed when his assailant is slain. The prostitute is surprised to see that his savior is himself – or at least someone who looks exactly like him. The doppelganger has his looks. He makes it clear that he intends to possess his soul.

It’s always effective to wrap up a collection of short stories with its strongest work and this is the best story in the book. It works on a number of levels. It is great horror writing with a good riff on the doppelganger archetype. It has Barker’s trademark violence woven in. It also works on an emotional and spiritual level with a moving and revealing final scene.