The man who successfully brought Stephen King’s “other” prison drama, Rita Hayworth and the Shawshank Redemption, to the big screen, drafted his own screenplay and directed a movie adaptation of The Green Mile. The results were nearly as good – and in some ways superior – to The Shawshank Redemption.

The movie opens with an elderly Paul Edgecomb (played by Dabbs Greer of Little House on the Prairie fame) awakening from a nightmare. He is later watching the 1935 movie, Top Hat with his lady friend, Elaine. When the movie’s signature song, Cheek to Cheek, comes on, Paul is overcome with emotion and must flee the common room. 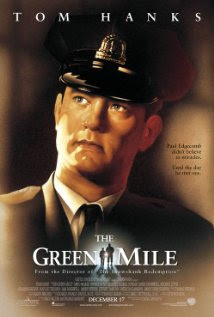 In the first few minutes, Darabont introduces a central plot element that was not in the book, thereby creating some mystery for moviegoers who had read the book. Just what was it about Fred Astaire and Ginger Rogers dancing cheek to cheek that stirred such emotion in Paul?

Elaine follows him to an atrium where she sits and tries to calm him down. He explains why he was so overcome with emotion by that movie and song. So starts the movie.

Darabont sticks very closely to the King story in his script. There are a few minor variations. The subplot of old Paul’s nemisis, Brad Dolan is removed. The narrative is straightforward where the book sometimes contain flashbacks within the flashback. The bit about Paul’s wife dying in a bus crash is also removed. These were all wise editorial decisions and Darabont’s rewrite of the ending made for better cinema than the book’s would have been.

The movie is one of those great cinematic feats where a nearly perfect script meets a nearly perfect cast. Tom Hanks plays Paul Edgecomb of 1935. Hanks brings to the role something that was missing from King’s conjuration of the head of Cold Mountain’s death row: an air of authority. In the novel, Edgecomb often seemed to be one of the guys rather than the leader. Hanks portrayal of the ever confident, always in charge captain of the guard makes him a stronger character. It makes his willingness to flaunt the rules in regards to John Coffey more stark and his confession before the doomed Coffey about having to face God and explain why he destroyed one of His great gifts more poignant.

The late Michael Clarke Duncan was born to play John Coffey. His imposing size led to a career of playing heavies and toughs. He uses that incredible stature to conjure John Coffey just as King imagined him – a simple, gentle giant. The raw emotion Duncan summons in his portrayal left most in the audience crying when I saw the film.

Also perfectly cast was Doug Hutchinson as Percy Wetmore. Hutchinson’s baby face lent itself to the role as the immature, obnoxious tormentor of death row inmates. His pout and whine were absolutely true to King’s rendering of the novel’s protagonist.

The supporting cast was every bit as strong as its stars. David Morse was superb in portraying the quiet but authoritative Brutus “Brutal” Howell. Sam Rockwell’s portrayal of William “Billy the Kid” Wharton was campy and over the top until he utters that chilling line, “As bad as you want, nigger.” Then the audience knows this is a bad dude. Veteran character actor, James Cromwell, is flawless as the warden who is so distracted by his wife’s illness that he has all but conceded leadership of the prison.

As I stated, the movie follows the book almost flawlessly until John Coffey’s Date of Execution documents arrive on the Mile. Unlike the novel, where Paul knows he has no choice but to carry out his duty, Paul of the movie actually offers to let Coffey escape if that’s what he wants. Coffey refuses the offer. He doesn’t want the guards to ruin their lives on his behalf and he tells Paul he’s ready to die, tired of the ugliness and brutality of man.

Paul asks if there is anything they can do for Coffey in his final days. Coffey says he’s never seen a “flicker show” and would like to see one. Paul and the other guards sit in a theater while a wide eyed Coffey takes in Top Hat, with Fred Astaire crooning, “I’m in heaven” as he dances cheek to cheek with Ginger Rogers.

The execution of John Coffey is some of the finest movie drama I’ve ever seen – more tear jerking than Old Yeller’s young owner having to put him down. The harden guards of the Green Mile are weeping as they strap Coffey into the electric chair. Paul remains stoic, but freezes when it comes time to order the juice. Brutus whispers that Paul has to do his duty. Very quietly, with just the slightest hitch in his voice, he orders, “roll on two.” The current flows.

We then switch back to the present tense with Paul telling Elaine that Coffey’s was his last execution and that he transferred to a juvenile facility after that. Elaine picks up on what seems to be the discrepancy in Paul’s story – his age. Paul tells Elaine that he is actually 108 years old. He explains that to show Paul the truth of the murder of the Detterick twins, Coffey had to pass along to Paul, “a bit of himself.” That bit of John Coffey has proven to be the curse of long life. Paul has had to live while his wife, children, and friends have all passed on.

Paul then invites Elaine to take a walk with him. They walk to the tool shed where Paul coaxes the mouse from his hiding place. It is Mr. Jingles, who also got a bit of John Coffey when Coffey restored his life after Percy Wetmore crushed him underfoot.

The movie ends with Paul reflecting on the emotional pain of having to live so long. We see Elaine lying in her casket as Paul wonders, if Coffey’s power can keep a mouse alive for more than 40 years, how long will a human go on imbued with Coffey’s essence inside him.

The Green Mile was one of Stephen King’s finest novels. It would seem that a movie could only cheapen it. However, Frank Darabont made a perfect movie of King’s wonderful novel. Darabont took little artistic license with King’s work, only tweeking it to remove the subplots that would have been uninteresting to film goers and introducing the powerful visual and audio cue that brought out the recollections that so bedevil Paul in his golden years.

Posted by Brian Schwartz at 2:48 PM