By 2006, television mini series based on Stephen King’s work were considered passé. Most of the quality material – and a lot of the less than stellar material – had already been adapted to one medium or the other. In 2006, King and frequent collaborator, Mick Garris, tried to resurrect the institution with Stephen King’s Desperation. Unfortunately, the source material was too weak around which to make a meaningful television mini-series. 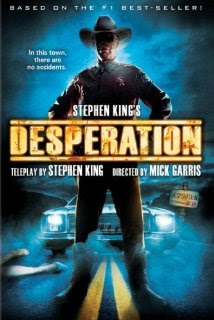 In adapting his 1997 book to the small screen, King adheres very close to his original story. Events play out just as they did in the book. The Jacksons are stopped by Desperation police officer, Collie Entragian (played well by Ron Perlman). One funny line made it into the script as the Jacksons are being led into the jail. Collie stops them and says, “Wait! Peter Jackson! I loved Lord of the Rings!” and promptly plugs him in the belly with four bullets.

From there, the story moves just as it did in the book. There are small variances. The character of Audrey Wiler is removed from the story. When Billingsley gets killed by the mountain lion, David is lured to the projection booth the ghost of his dead sister. The truth of what happened at the China Mine back in 1858 is revealed to David by God via a sepia toned motion picture (even though video recording devices did not exist in 1858).

While David is presented as a godly person and perhaps one of the truly blessed, his special communal abilities are not played up. The references to the Ho Chi Minh Trail and the Vietcong Hideout are removed and he never communes with God in the tree house as he did in the book.

Instead, we find out that Johnny Marinville had an encounter with Tak back in Vietnam and that Tak blew up a bar, killing dozens of people.

The movie’s climax and end play out just as they did in the book with Mary escaping from the shed at the base of the mine and the others descending into the mine where ultimately, Johnny Marinville blows the mine, sealing Tak forever. The rest of the group escapes in the Ryder truck.

The movie ends with the group driving down U.S. 50. Mary asks Steve to stop the truck so she can retrieve something from her car. She retrieves a photo album that had belonged to little Pie Carver. The book is autographed by Johnny Marinville.

As I noted earlier, the source material was weak. The story and its characters were weak, so the project was doomed from the beginning. Garris did a great job of casting with Perlman, Tom Skerritt, Annabeth Gish, and Charles Durning in the cast. And those actors did what they could with the script provided. But nothing was going to save this story.

While the deviations from the King novel were small, they hit at what was the essence and subtext of an otherwise bad novel: The nature of God. In the book, David and Johnny discuss God at length and how cruel he can be. They discuss man as the creation of God to do God’s will and freewill. The question left unanswered by the book is is God the wrathful, dismissive God of the Old Testament, or is He the God of love and mercy as represented in the gospels of the New Testament.

Instead, King tries to present the story as an action oriented horror story which was the precise weakness of the novel. The novel contained very little action or movement. Its narrative was dialogue driven and heavy on flashback. It was quite contemplative. If it had a strength, it was this contemplation. That never made it into the movie.

As with a lot of the made for television mini-series based on King’s work, every King fan should view this movie once. Those who are not hard core fans of King will find it to be horrible and even a few of his hardcore fans will find it nearly unwatchable.

The book is not without its fans and it is one of the King books that’s quality is debated among his legion of Constant Readers. I don’t think there will be much debate about the quality of this movie.

Posted by Brian Schwartz at 1:33 PM