Ashputtle
A morbidly obese kindergarten teacher tells her life’s tale in abstract terms. She lost her mother at a young age. Her father remarried her mother’s best friend. Her mother’s death leaves her empty, so she fills her life with food. Years later, while teaching, she talks about how parents are disarmed by an obese teacher who certainly must dedicate her entire life to her students since she couldn’t possibly have anything else in her life, being so unattractive. She shows one family with good looks, successful careers, and pretty children, that their perfect lives can be shattered and made imperfect. 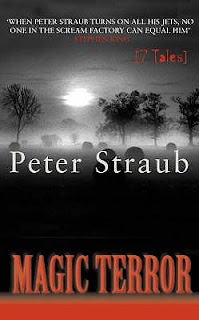 This was a twisted tale with a twisted main character. The writing is so abstract that sometimes, the reader is forced to make assumptions. I didn’t much care for the “literary” style, but found the teacher and story to be revolting enough to make it worthwhile reading.

Isn’t It Romantic?
An American spy is on assignment in rural France. It is to be his last assignment, after which he will retire to his hobby of collecting and reading books. He is to stop a French arms merchant posing as an antiques dealer from consummating a sale with terrorists. He is chagrined to learn that the agency has an observer posted on the job, learning the ropes of the trade by observing him incognito. He monitors his quarry before making his move. But there is a double cross followed by a triple cross that leaves a bloodbath of bodies.

This was pretty standard spy fare – third rate John le Carré. There is no real twist or revelation. The story's subtext is a cliche. It is dull, boring, and lifeless – and overlong!

The Ghost Village
During the Vietnam War, a platoon of soldiers happens across an abandoned village. They enter one of the huts and find the body of a dead boy and a torture chamber. Before they depart the village, the narrator (a sergeant) sees the ghost of the little boy and the ghosts of two of his fellow soldiers who died hours before. Later, that sergeant encounters an old high school buddy in a local bar. That old buddy (a captain) tells the sergeant about the horror of what happened in that village and the nature of Vietnamese ghosts.

This was an intriguing tale. It seemed to go a number of different directions before coming together quite nicely at the end. It was quite atmospheric and tense. The story is a bit of a prequel to Straub’s Vietnam horror novel, KoKo.

Bunny is Good Bread
Young Fielding Bandolier lives in a small, ground level apartment with his abusive, ne’er do well father and his comatose mother – who was beaten into a coma by his father. Fee endures abuse and neglect as his father eeks out a living at area hotels that regularly fire him after just a few months. Fielding finds solace in movies. But the violence of the movies and the violence of his life have Fee looking for an outlet or escape. When his mother finally completes her death throes, he is fundamentally altered and the horror begins.

This was a dark story with no light moments or let up in the tension. At times, because Peter Straub tries entirely too hard to write “literature” as opposed to just writing a good story, the narrative is hard to follow. But the story is good enough and the sympathetic but dark main character strong enough to carry it.

Pork Pie Hat
In this story within a story, a Columbia English student becomes a fan of famous jazz musician who plays Greenwich Village clubs. After listening the saxophone player perform countless times, he decides to interview the man. “Hat” agrees to be interviewed. The student meets him at his dive hotel room and they discuss jazz, influences, and protégés. But Hat is interested in telling one other tale. He tells the student that he will never play on Halloween – won’t even leave his room on Halloween. Hat shares a harrowing tale of voodoo, hoodoo, and racism from the old South that chills the author to the bone.

This was a superb story within a story. The front end character development may have been overlong, but one can’t help but think Straub was padding just a little so this novelette could be published stand-alone in a cost effective manner. Straub effectively develops two atmospheres. The first being the jazz scene in an undefined era, perhaps the 1970s when swing jazz was a fad again. He also sets the atmosphere of “separate and unequal” living conditions in the South in the era of Jim Crow. He adds a mysterious element. While there was a white section and black section of town, Hat’s hometown had a third section where both whites and blacks of the lowest social and moral order lived. That is where the action takes place.

Hunger: An Introduction
A pompous bloviator takes us on a tour of his life and how it was he became a ghost rather than passing on to Heaven. He talks in great detail of his sins and transgressions, but not seeing them as sins or transgressions, but rather as conquests of which he is proud.

I know this was supposed to be a morality tale, but I enjoyed it more for the main character’s overt pomposity. He was an insufferable ass incredibly well written by Straub.

This was an amusing, yet dark and violent novella. Club and Cuff were totally over the top as characters and their high brow patois was amusing. The only problem I had was the causation factor in Club and Cuff teaching their client hard lessons and ruining his life, sending him back to his home town and bringing his life full circle. If the clues were there, I didn’t get them.

I’m not a major fan of Peter Straub. I look at Straub as someone a little embarrassed by what he does and therefore, has to try to make his horror writing high brow literature instead of just letting the prose flow naturally. Inside the literary flights of fancy in Ashputtle made it hard to mine that nugget of a good story. Mr. Club and Mr. Cuff also got bogged down in deep dictionary words that took away from the story. Straub ought to take a lesson from Stephen King and just try telling the tale.

Having said that, Straub’s style served him well in Hunger: An introduction. That character was supposed to be a pompous ass and it would seem that if Straub could develop any character exceptionally well, it would be the pompous ass.

Ashputtle and Porkpie Hat are held in high regard by most reviewers. Most seem to hate, Hunger: An Introduction. I didn’t despise any of the stories in this collection, although I found, Isn’t it Romantic to be pedestrian and dull reading with nothing new or exciting to add to an old concept. Magic Terror isn’t going to rival any of the short story collections of the masters of short fiction. But the seven tales contained within (if you can suffer Isn’t it Romantic) are worth the time to read.