The Cycle of the Werewolf By Stephen King

The Cycle of the Werewolf
By Stephen King
Copyright 1982

What started out to be a conceptual calendar featuring the illustrations of comic book artist, Bernie Wrightson highlighted by short narratives by Stephen King turned into a limited edition novella released in 1983. The Cycle of the Werewolf was eventually released as a trade paperback in 1985. 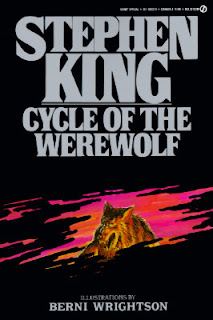 Each chapter is a month and represents a lunar cycle. In the chapters spanning January through June, a new victim falls prey to the werewolf that is stalking Tarkers Mill, Maine. Victims include a isolated railroad worker, the town seamstress, the town constable, and an 11 year old boy flying a kite in the park.

When the human incarnation of the werewolf figures out that it is he slicing and dicing the people of Tarkers Mill, he is horrified. He’s the town’s Baptist minister.

Finally, in July, the werewolf is dealt a setback. He tries to tangle with ten year old Marty Coslaw. Marty is a paraplegic. He sneaks out late on the Fourth of July to set off some fireworks given to him by his beloved Uncle Al – the only member of his family who treats him like he’s a person rather than somebody different, defined by his disability.

The werewolf closes in on Marty and he tosses a Black Cat firecracker at the beast. It explodes in its face and the creature takes off, obviously injured. Marty is horrified in October while trick or treating. He sees Pastor Lester Lowe bearing an eye patch.

Marty likes the pastor and has no desire to see him die. So, he starts sending him anonymous notes, telling Lowe that he knows his secret identity and urges him to kill himself to end the horror.

Posses take to the woods surrounding Tarkers Mill to hunt the person they’ve dubbed, “The Moonlight Killer.” Lowe knows he can’t risk prowling the countryside around the village. So, in November, he travels to Portland to claim his victim who happens to be a resident of Tarkers Mill.

By December, Marty is frustrated and sends Lowe one more letter. This one he signs. Lowe decides to kill Marty.

Marty tells his uncle what he has done. Uncle Al has a friend assemble two silver bullets for him. He comes over to Marty’s house on New Year’s Eve (the night of the full moon) to wait. Shortly before midnight, the werewolf bursts into the Coslaw living room through the front room. Marty fires both bullets. The first one takes out the werewolf’s other eye. The second one catches him in the chest, killing him. The year of terror for Tarkers Mill is over.

This is one of the least discussed of Stephen King’s work. It is not even discussed when people talk of his short work. The story is not a full blown novel, but never appeared in any compilation of King’s short fiction. It appeared as a limited edition book published in 1983 and later as a trade paperback, complete with the Wrightson artwork in 1985.

It’s too bad that more people are not familiar with this book because it’s a nifty piece of short fiction. The victim per month vignettes are taut and well told. With just the barest of backstories, Marty Coslaw and his uncle develop into sympathetic characters the reader is instantly rooting for. I would rank it as one of King’s better short works.

The book is not easy to find. Copies show up from time to time on Ebay and Amazon. Copies in good condition are even harder to find. It is available on Kindle, but the Kindle version does not include the Wrightson illustrations which are pretty cool. Some are pencil drawings. Others are watercolor. They are all excellent.

The Cycle of the Werewolf was made into a movie in 1985 called Silver Bullet. Much more story was added and the action centered around a hot rod motorized wheel chair Marty’s Uncle Al built for him. Marty uses that wheel chair to escape the werewolf pursuing him.

The movie was not well received and did not do well at the box office. At that time, expectations for movies based on King’s work were high. The underdeveloped schlock and garbage that would come later had not yet been released. When considered with all of the movies made based on King stories, Silver Bullet is actually a pretty decent movie and it has grown on King fans over the years.

It’s not an easy book to find and you’ll never see it on a library shelf. But if you’re able to lay your hands on a dog eared copy of the trade paperback, it is worth the 90 minutes it takes to read the story.

Posted by Brian Schwartz at 7:13 AM