Book to Movie: Silver Bullet (1985)
Screenplay by Stephen King
Directed by Daniel Attias
Based on the novelette Cycle of the Werewolf by Stephen King


By 1985, Stephen King was an instantly bankable entity in Hollywood, so it must have been a shock when the first movie to have his name appear on the marquee posters as “Stephen King’s Silver Bullet” flopped. 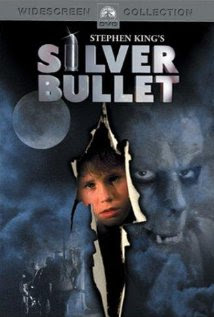 It’s too bad this movie didn’t do better at the box office. It had a $7 million budget and made just $5.4 million according to IMDB.Com As Stephen King movies go, it was solid if not overly exciting. Worse movies bearing King’s moniker have done better.

The movie was based on a short novelette that started as a narrative calendar. With 94 minutes of screen time to work with, King had a much larger pallet upon which he could expand and develop his characters.

The movie opens with narration provided by Marty’s sister, Jane Coslaw (played by Megan Follows) telling us how the brutal murders in Tarkers Mill started that spring of 1976 with the murder of a railroad worker who was decapitated. As she points out, the man was a well known drunk and the locals attributed it to drunken misadventure.

King starts by developing Marty (Corey Haim) and Jane Coslaw and their contentious relationship as brother and sister. Marty participates in a prank carried out by his buddy, Brady, that ends with Jane on her ass in a mud puddle, ruining her dress. Through the movie, we come to understand that, while Jane loves her brother, she resents that his disability earns him sympathy to which she is not entitled.

When a second person turns up dead, a woman downing pills and booze in her bedroom to commit suicide, the community learns that there is a brutal killer on the loose in their town. The murders become personal to Marty after his best friend, Brady, is torn to pieces in the town park one night under a full moon.

Terry O’Quinn plays the beleaguered town sheriff (much different than the diffident, drunken constable in King’s novelette) who is unable to produce a single clue as to the killer’s identity.

O'Quinn's sherrif is much different than the one in the novellete who is just a drunk with a badge. O'Quinn's role has him tormented by his inability to solve the crime and waging the fight against vigilante justice. In the novellete, the sheriff is killed by the werewolf on a country road while drinking in his car.

Like in so many horror movies, there’s a local agitator who dismisses the sheriff as incompetent and wants to lead his own posse into the town and surrounding woods to get the killer. That agitator is Andy Fairton, who spends hours at the local bar complaining loudly about Sheriff Joe Haller’s incompetence. Finally, over the objections of Sheriff Haller and the town reverend, the posse is formed and they head for the woods.

The woods are foggy and visibility is low. The posse hears a creature moving among them beneath the fog. One by one, they are pulled down and eviscerated. Bar owner Owen Knopfler is beaten to death with his baseball bat that is emblazoned with the word, Peacemaker. It seems to the people of Tarkers Mill that this killer is unstoppable.

Meanwhile, Marty’s uncle Red (not uncle Al as in the novella) comes to stay with his family for a few days. He’s already constructed for Marty a motorized wheelchair powered by a single cylinder internal combustion engine. While visiting, he builds Marty a three wheeled motorcycle resembling a wheelchair. This one has much more horsepower than the single cylinder model and is emblazoned with its name along the side plates. Marty’s new ride is the Silver Bullet. He delights in the speed of his new ride.

By July, the town is living in terror of nightfall and the full moon. The July 4th fireworks are canceled to keep people from being outside at night. Marty is crestfallen, but Uncle Red comes to the rescue. He produces several fireworks and bottle rockets for Marty to hold his own show.

One night, Marty sneaks out and boards Silver Bullet. He rides out to a country bridge and starts launching his fireworks, delighting in his own private show. He hears the noise of an approaching animal. He turns to see a werewolf bearing down on him. He lights a rocket and lets it go in the direction of the creature where it lodges itself in the creature’s eye. The wounded wolf flees into the night and Marty rides like the wind back to the safety of his home.

The next day, Marty tells his tale to sister, Jane. In her narration, Jane tells us that she wasn’t sure that she believed Marty, but she believed Marty believed what he was telling her. She agrees to make her way around town to see if she can locate a resident with an injured eye.

Under the guise of collecting cans and bottles for a charity drive, Jane visits many local residents and businesses. She looks carefully and can find no one with an injured eye. Feeling like a dupe and a fool, she heads for Reverend Lester Lowe’s parsonage to turn in the cans and bottles she’s collected. The priest is working in the garden and careful to screen the injured side of his face from Jane as he tells her to dump her scrap in the garage.

Jane enters the garage and starts unloading. As she does so, she is startled by a mouse and falls into a pile of cans. As she gets up, she finds a baseball bat with the word Peacemaker burned into it. Just as she does so, Reverend Lowe walks in and asks if she’s okay. She says she’s spent too much time in the sun and needs to get home. Lowe invites her in for a drink of soda and offers to drive her. Jane now believes Marty and she knows the identity of the monster. She just wants to get away and flees the garage.

The siblings share their findings with the only adult they feel they can trust – Uncle Red. But even he’s incredulous and tells them they’re being silly kids.

One day, Marty is tooling across the countryside on Silver Bullet when Reverend Lowe pulls up beside him in his car. He tries to run Marty off the road. Marty is able to outmaneuver him and drives onto a closed and condemned covered bridge. There, he runs out of gas. The Reverend walks onto the bridge and is closing in on Marty when a farmer exits his field on the other side of the bridge. Marty calls out to him and Reverend Lowe flees to his car.

Marty returns home with Silver Bullet and shows his Uncle Red the blue paint on Silver Bullet’s mangled fender. Marty and Jane are now terrified. They want Uncle Red to take their silver jewelry and fashion a silver bullet. They know the next full moon will spell their doom because they alone know the werewolf’s identity. Uncle Red reluctantly agrees.

The Coslaw kids’ parents are duped by Uncle Red into taking a trip to New York on Halloween night. He agrees to sit with the kids and await the arrival of the werewolf, armed with a .357 magnum loaded with a single silver bullet. The trio waits but eventually falls asleep.

At 3:10 AM, a sleeping Red burns himself with a lit cigarette and awakens everyone in the room with his scream. He looks at the clock and concludes the whole night has been an exercise in foolishness. As the kids are pleading with him to stay, the power goes off. A few moments later, the werewolf jumps in the window and attacks Uncle Red who drops the gun and bullet. Jane grabs the gun and Marty struggles to retrieve the bullet from a furnace vent. He finally grasps it, grabs the gun, loads it, and shoots the werewolf in his uninjured eye. The werewolf slowly morphs into the Reverend Lowe, now dead.

Uncle Red, Jane, and Marty sit huddled on the floor watching the transformation. Jane turns to her little brother and says, “Marty, I love you.” The movie concludes with Jane’s narration telling us she wasn’t always able to say that, but now she can. The movie wraps with narrator Jane saying, “goodnight. . .”

I would not rank Silver Bullet among the great films based on King’s work, but I think it is a real sleeper, not well known or appreciated by those who are not fans of King’s films and movies.

What is different is the element of mystery. From the time of Lon Cheney, Jr. bringing the character to life in the legendary Universal Studios film, the element of mystery is missing. In the Universal flicks as well as the Hammer Studio films and various other incarnations such as An American Werewolf in London, we’ve always known who the werewolf was. The story is usually told from the werewolf’s point of view. The man who is the werewolf is a self loathing, pitiful creature who longs for release.

King’s story is different in that there is at least a nominal bit of mystery in his story. There is a sequence in the movie that rather ham-handedly tips off the viewer as to who it is when the priest has a nightmare of his parish turning into a pack of werewolves as he presides over a funeral. But the viewere doesn’t know for sure until the priest turns his head to look at Jane.

The movie is well paced, but the subplot of tension between brother and sister is not well developed. Jane does her fair share of complaining, but no one is affected by it. Her parents are dismissive of it and Uncle Red doesn’t react to it at all. It seemed that the opening and closing narration were designed to introduce and then close that tension between siblings. It’s too underdeveloped to evoke an emotional attachment.

The werewolf scenes early in the movie were wonderfully shot and edited. Much like Alien, we only see bits and pieces of the creature – never the whole entity. However, at the end, when the werewolf jumps into the Coslaw living room, the werewolf is in full view and inspires all of the terror of a 1940s man in an ape suit.

While it is much different than its source material, Silver Bullet is a worthwhile, enjoyable movie. It’s not terrifying and no one is going to mistake it for high cinema, but it is well cast, well directed, well acted, and has a script that works.

Posted by Brian Schwartz at 1:49 PM