Book to Movie: All the President’s Men 1976
Screenplay by William Goldman
Directed by Alan J. Pakula

As I noted in my review of the book, All the President’s Men, it read very much like a suspense thriller. Apparently, Hollywood felt the same way because the screen treatment of the book which chronicled Bob Woodward and Carl Bernstein’s methodical pursuit of Richard Nixon’s cadre of miscreants in his reelection campaign, into a full blow suspense thriller. 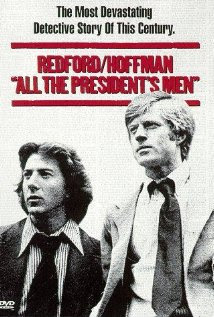 The movie does not closely follow events as they transpired in the book, but sticks very closely to its theme of investigative journalism on steroids. Dramatic license was taken with various editors’ meetings to which neither Woodward or Bernstein were privy where the editor’s debated who should actually be covering Watergate and how or even if it should be covered.

I also noted in my review of the book that it would be difficult for someone who was not at least somewhat familiar with the internal structure of a presidential campaign or a White House executive office of the president was staffed, to follow the movie. This must be doubly true for those watching the movie.

Names like Bob Haldeman, John Mitchell, Gordon Liddy, and Howard Hunt are thrown around by Woodward and Bernstein – portrayed respectively by Robert Redford and Dustin Hoffman – without any mention of or context as to what these men actually did for Richard Nixon and his political campaign. Mitchell is mentioned as attorney general and as campaign chairman. Yet, viewers are never told that he resigned as attorney general to become campaign chairman.

Other names that come into play as the movie climaxes toward the disclosures that there was White House involvement in the campaign’s dirty tricks shenanigans are Donald Segretti and Jeb Stuart Magruder. Again, viewers are provided no information to allow them to appreciate the roles these men played.

This is pertinent and important information. Woodward and Bernstein found it necessary to provide a list of names and their job titles at the beginning of the book to help keep the players straight. Perhaps moviegoers should have been provided a program with their admission.

Oddly missing from the movie in any context is the name John W. Dean. Dean was the man who ordered the break-in, who instigated the coverup, then threw everyone else under the bus when he could no longer hold it together. One of the most important misdeeds of Watergate, which was revealed during Woodward and Bernstein’s coverage, was that acting FBI director Patrick Gray, burned the contents of Howard Hunt’s White House safe on Dean’s orders.

Perhaps this omission is because John Dean was every liberal’s hero for being the main player in bringing down the Nixon administration. His book, Blind Ambition, had been published that year and Dean was viewed as the repentant hero.

Parts of the book which seemed melodramatic in writing came across as silly to those who know anything about history. The scenes with Deep Throat were overacted by both Redford and Hal Holbrook. The silliest scene was near the end of the movie when Bernstein was told that their lives were in danger. It read like melodrama and played out on the screen like a bad spy movie.

Those scenes seem even more foolish now. No president or administration has been as heavily scrutinized as that of Richard Nixon. Nowhere in any of the taped conversations, secret memoranda, or the revised history of the scandal’s participants is there even the slightest hint that anyone wanted the reporters dead. But it did make for a great scene.

What made the movie good was actually what was occurring in the background in a number of scenes. News coverage of the 1972 Republican convention played in the background as Woodward and Bernstein discussed Nixon’s misdeeds. An interview with Attorney General Richard Kleindienst played on a home television as he tried to explain the FBI’s narrow investigation of the case. These scenes and others, from old newscasts, helped put the events portrayed in the movie into a proper historical context.

All the President’s Men was nominated for an Oscar for best picture in 1976. I wonder if this had more to do with Hollywood’s political leanings than quality of the movie. It was an entertaining movie, but not the stuff of best pictures.

It is a movie that people should see. Behind the melodrama plays out what is perhaps the best piece of investigative journalism in history. If you can follow the players, your enjoyment of the movie will be dramatically increased. For history buffs and aspiring journalists, the movie is a must see. Others should regard it as a historical drama – not a documentary.