All the President’s Men By Bob Woodward and Carl Bernstein

This was the book that started it all. Since Bob Woodward and Carl Bernstein wrote their 1974 best seller about the Watergate scandal, nearly 100 books have been written since. Most of the major players in the scandal wrote books to defend their conduct and even a few of the minor players authored books to make a little money. 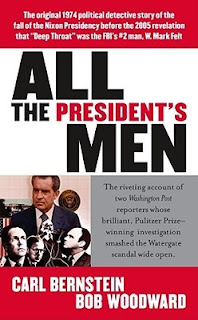 The Woodward and Bernstein investigation also put into motion the investigation that would ultimately result in the demise of the presidency of Richard Nixon.

All the President’s Men opens with Washington Post reporter Bob Woodward receiving a call early Saturday morning from an editor telling him to cover the break-in of the Democratic National Committee’s offices inside the Watergate complex. From covering the break-in and the arraignment of the five burglars, the story took off and erupted into one of the most important constitutional crises this nation has ever faced.

What’s not stilted is the meticulous nature Woodward and Bernstein applied to their research to take it from what Nixon press secretary Ron Ziegler ridiculed as a “third rate burglary,” into a story with constitutional implications.

Interested in how the burglars were paid and their operation financed. Woodward and Bernstein were able to uncover a money laundering operation. The CRP’s Midwest finance chairman, Kenneth Dahlberg transferred unreported cash donations to Mexico where checks were issued and cashed at a bank in Miami. The cash then ended up in a safe inside the CRP. The cash in that safe was under the direct control of CRP finance chairman (and former treasury secretary) Maurice Stans. At one point, it appeared that Stans’s safe contained up to $700,000 in undeclared cash. The CRP argued that the cash was to be used for security and political intelligence. However, the reporters were able to demonstrate that most of it went to fund illegal campaign dirty tricks authorized by former campaign chairman John Mitchell and Deputy Campaign Chairman Jeb Stuart Magruder.

As they interviewed workers within the CRP and officials close to the investigation, the reporters discovered a whole host of political shenanigans designed to undermine the Democrats’ run for the presidency in 1972.

They found a man by the name of Donald Segretti whose job it was to pull foolish, but disturbing pranks on Democratic candidates such as ordering unsolicited pizzas for non-existent rallies, announcing rallies that were never scheduled, and announcing schedule changes for rallies to confuse supporters. Segretti undermined the campaign of Edmund Muskie by planting the details of Muskie’s wife’s off color jokes and erratic behavior. Muskie’s response to that crisis destroyed his campaign.

They found that E. Howard Hunt had once worked for White House aide, Charles Colson to investigate Ted Kennedy and the death of Mary Jo Kopechne at Chappaquiddick and to dig up dirt on other candidates. Hunt had also created a false telegram to make it appear that President Kennedy had directly ordered the assassination of South Vietnam President Ngo Dinh Diem.

What disturbed the reporters the most was the lack of investigation by the FBI. The FBI was determined not to investigate the matter beyond the burglary itself. The burglars and their direct supervisors, Hunt and G. Gordon Liddy, were tried and convicted without talking about any other people involved. This frustrated judge John Sirica who presided over the trial.

When it came time for the Senate to confirm new FBI Director, L. Patrick Gray, senators grilled him on Watergate and the apparent lack of follow through on the investigation. Gray then made several bombshell disclosures. He told the senate panel that he’d burned the contents of Hunt’s White House safe at the orders of White House counsel, John Dean.

For most of Woodward and Bernstein’s investigation of Watergate, they were hounded and harassed by the White House. Gray’s disclosures led the White House to change its tone somewhat since misconduct linked to Watergate had been directly tied to the executive branch and to the highest levels of the Nixon Administration.

Later investigation revealed the existence of an internal White House organization known as the Plumbers. Their job was to recommend wire taps of reporters and government officials to find out who was leaking information to the press. The creation was apparently spurred by the disclosure of the notorious Pentagon Papers to the New York Times by Daniel Ellsburg. The reporters eventually uncovered a break-in into the office of Ellsburg’s psychologist, carried out by Hunt and members of the Plumbers unit.

Eventually, the scandal rose to the level that Democrats in the Senate felt compelled to convene a special committee to investigate. That committee, chaired by Sen. Sam Ervin, became a source of damning information about the Nixon White House as it conducted its investigation.

Through interviews with anonymous sources and a justice department officials, Woodward and Bernstein learned that the balance of the unreported campaign cash was funneled to the burglars' families by Nixon's personal attorney, Herbert Kalmbach. These sources believed that the White House was either trying to buy their silence or the president was being blackmailed. When Hunt's wife, Dorothy, was killed in a plane crash, among her belongings were thousands of dollars of cash, seemingly confirming these suspicions.

The book ends with President Nixon on television, announcing the resignations of H.R. Haldeman and John Ehrlichman as well as the dismissal of John Dean. Those three, along with Chuck Colson, Kalmach, Mitchell, Magruder, Dean, Hunt, Liddy, and various other aides and campaign officals would eventually end up going to prison for their roles in the Watergate coverup.

All the President’s Men reads like a spy thriller. It is difficult to follow if the reader is not familiar with how campaigns are structured and how the executive office of the president is structured. But if you can follow the large cast of characters, the book is compelling reading.

The authors writing about themselves in the third person is awkward and sometimes foolish. They write about arguing, but one has to wonder from whose perspective it was written.

We now know that Deep Throat was not motivated by nobility. He as a disgruntled job seeker that thought he should have been named to head the FBI instead of L. Patrick Gray. W. Mark Felt identified himself as Deep Throat in 2005. Felt was Gray’s chief deputy and had spent 30 years in the agency. When he didn’t get the nod from Nixon, the lifelong Republican turned on his president.

As an avid student of the Watergate scandal, I should have known that Deep Throat was an FBI agent. The White House, the Justice Department, and the Ervin Committee all complained that much of what the Post wrote dame directly from FBI 302s which are the forms used by the FBI to compile notes on interviews and investigations.

Something that disgusted me as much as the conduct of the Nixon men was the attitude and conduct of Washington Post editor, Benjamin Bradlee. Bradlee was a strong Democratic partisan and relished “getting” Nixon. He approved an erroneous article that falsely accused Bob Haldeman of authorizing cash payments from the Stans safe and apparently had no compunction about doing it. As Nixon’s press secretary, Ron Zeigler put it, Ben Bradley was little more than a Kennedy coat holder.

The conduct of the Nixon campaign is disgusting on two levels. First and foremost was, of course, the illegal activities such as breaking and entering and the coverup that followed which was entirely unnecessary. Nixon was going to win in 1972. Had Nixon disclosed that Hunt once worked in the White House, the information revealed by Woodward and Bernstein would have hurt, but certainly not derailed the Nixon campaign and the president’s hands would have still been clean. The shenanigans were foolish and the coverup even more foolish.

The other disturbing component is just how amateurish and clownish the agents of the CRP behaved. Fake wigs and mustaches, illicit pizza orders. stupid pranks carried out by clowns. It is remarkable since Richard Nixon was a statesman of stature in 1972, having been on a national ticket five times. His campaign manager, John Mitchell, was a wise and skilled lawyer, a sage of politics, and a man not given to childish behavior. How it all came to pass is still a mystery that baffled Nixon to the day he died. He eventually came to understand the coverup and even acknowledged his role in it. But he never understood why the Watergate break-in ever occurred. We may never know for sure.

All the President’s Men is a great first draft of the history of Watergate and documents the events that led to the coverup. Much has been written about Watergate, but most of it focuses on post break-in activities. This is the authoritative book on what led to the tragic events that followed and eventually toppled the Nixon presidency.

Posted by Brian Schwartz at 5:12 PM