At first glance, it would seem that the novel, Pet Sematary would lend itself well to the motion picture industry. It had first class scares, striking visual scenes, and a strong plot. However, what emerged in Mary Lambert’s movie was just the shell of the novel with its most essential element missing. 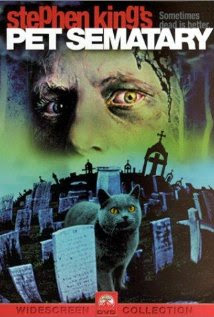 The movie follows events in the novel pretty closely. There are minor deviations such as the very opening scene when, instead of removing a bee sting from Gage Creed, Judd Crandall rescues him from the side of the road. Lambert has established the road as a menace early in the film.

While that particular segment was effective, it was also emblematic of all that was wrong with this film. It tried too hard to develop too fast. The path is discovered by Elle in the first five minutes of the movie and within 10 the cast is hiking to Pet Sematary.

What suffers is character development. What made the book so effectively scary was how King took nearly half the novel to develop strong relationships between the characters. The action didn’t really get rolling until then. In his script, King skipped this development and went right to the action. The action was not enough to sustain the movie and make it meaningful.

Pascow is made into a major character in the movie. The two scenes contained in the book, Pascow’s death and speaking to Louis in the infirmary and then, later that night, taking him to Pet Sematary are in the film and play out almost as they did in the novel. However, he appears to subliminally guide Rachel on her frightful return trip to Maine from Chicago in her vain attempt to rescue Louis.

Perhaps this was added to ramp up the horror element in the movie, but ended up coming off as extraneous.

Louis’s journey through the haunted woods to the Micmac burial ground was the opportune point in the movie to ramp up the horror since it’s clear that Lambert was trying to make a horror movie out of King’s rather cerebral examination of death. Instead, it all played out rather quickly with one cheap jump moment thrown in.

The climax of the movie when Gage returns home and then goes over to play with Judd was well executed and remained true to the book. Rachel’s arrival and her encounter with her sister’s ghost was also well done and added a truly creepy moment to the movie. Lambert delivered the goods at the climax.

The ambiguity of the end of the novel was creepy, with Rachel walking in, placing her hand on Louis’s shoulder and saying, “Darling. . .” was wonderfully conceived. Lambert used the same lines, but she actually shows us Rachel’s animated corpse which happens to be secreting a knife. Again, this was a cheap effort at ramping up the horror at the end of the movie.

For all these criticisms, it was not a bad movie. It was well cast (especially Fred Gwynne as Judd Crandall) and the story was well paced for a movie. However, it really missed the point of the book. The book was a fictional examination of death and its devastating and sometimes tragic effect on those left behind. The horror wasn’t in Gage’s rampage or in Rachel’s sister frightening her from beyond the grave.

The horror was in how the Creed family fell apart in the wake of Gage’s death and how a man of science so devoted to rationality would commit such a horrific act as to raise his son from the dead. It was also an examination of the rituals of death as practiced in America. The book’s plot, theme, and subtext were deep and meaningful.

The movie took the most superficial elements of the book and tried to tie them together into something frightening. The result was an uneven, unexceptional, but completely watchable and enjoyable average horror movie.

Horror movie fans enjoy this movie, but never discuss it as a “great” film. Most dedicated Stephen King fans recognize its glaring weaknesses, but enjoy it anyway.

Pet Sematary is probably not a book that lends itself well to a movie once its plot and subtext are recognized. To do the book justice would make for a movie that would take too long to get going for most movie audiences.

Posted by Brian Schwartz at 4:26 PM