Introduction by Robert Lynn Asprin
Hakiem the Storyteller leaves the comforts of the Vulgar Unicorn to travel to the Fishing District near Sanctuary. He has learned the Old Man – hero for killing the giant sea creature that had almost destroyed Sanctuary’s fishing industry – has disappeared and is presumed dead. Hakiem wants to get the story to add to his repertoire. He meets a one armed fisherman who tells him that, despite the claims of authorities, the Old Man and his son did not drown at sea. He cannot explain their disappearance. All he knows is that, one day, the Old Man and his son set off for deep waters. Their boat was later found adrift. The one armed fisherman, who found the Old Man’s boat, says that when he arrived on the scene, he saw a strange ship – one that did not belong in the waters near Sanctuary – sailing for the open sea. Hakiem leaves to investigate further. He is worried because there are many strange events taking place in Sanctuary and events abroad seem to portend war. 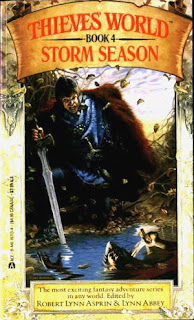 Asprin presents Hakiem as a journalist in this story. Hakiem won’t tell the story until it is complete. He is interested in facts, not speculation. Hakiem has evolved from a spinner of tales to the chronicler of the history of Sanctuary.

Exercise in Pain by Robert Lynn Asprin
Jubal, slaver and power player in Sanctuary is left stricken by an encounter with his arch nemisis, the Hellhound, Tempus. His legs are shattered and he is dying. He is carried to a hidden location and his assistant summons the mage, Lizzerene to heal him. Lizzerene does indeed provide his healing tonics. But Jubal wants them to work faster, so he sneaks drinks of the wizard’s tonic, with disastrous results.

This is not a good stand alone short story, which was the original purpose of the Thieves’ World series. It is but a chapter in an ongoing story. Nonetheless, it is well paced and interesting with a great twist.

Downwind by C.J. Cherryh
Downwind is the poorest and most retched part of Sanctuary. It is there that the thief, Mrhadon Vis has fled after his unfortunate encounter with Ischade, the sorceress and enchantress who leaves her lovers dead. A group called The Stepsons is hunting former members of Jubal’s street army known as Hawkmasks. Vis hooks up with two former Hawkmasks to elude the hunters. But one of them is a spy.

This short story was almost impossible to follow. While the setting of Downwind was vividly described, the plot and the characters were tissue thin. No clear motivation for any of them emerged. The betrayal at the end meant little since the reader had little information as to why it was a betrayal. A reader should expect more from a former Hugo Award winner like C.J. Cherryh.

A Fugitive Art by Diana L. Paxson
Lalo, the enchanted artist, is commissioned to paint a series of portraits by a scheming political rival of the prince. Lalo hates painting portraits because he can only paint the person’s true nature rather than their appearance. Before he can finish painting the portraits, a would-be assassin gains access to them to use their information to kill the prince and his courtiers. Lalo must confront this assassin and eliminate his threat. But just when he has the assassin at a disadvantage, the assassin challenges him with a most bedeviling question.

Diana Paxson has created one of the more intriguing characters in Thieves World in Lalo. He is complex and full of character, unlike many of the caricatures and clichés that populate these books. His moral struggle – already rich and complex – is made even more so by the challenge of killing to save one’s own life. Bravo Diana Paxxon!

Steel by Lynn Abbey
Walegrin, half brother of S’Danzo Illyra, has returned to Sanctuary with the ore necessary to make the legendary Elibar steel. He finds a blacksmith willing to refine the ore and make Enlibar blades. Meanwhile, he examines the power structure in Sanctuary and finds a vacuum left by the apparent departure of the slaver Jabul and his army of Hawkmasks. However, when his half sister goes missing, he makes a deal with Prince Kadakathis to help ensure the security of Sanctuary – a town he hates.

This story was well plotted and well written. It fit nicely into the developing instability in Sanctuary after the fall of Jabul. What was unclear in the story is what Walegrin’s goals were beyond getting the Elibar swords made. What did he hope to accomplish with those blades? Perhaps the question will be answered in a later story.

Wizard Weather by Janet Morris
Cime, the killer of wizards is at it again as she kills the leader of the mages in Sanctuary. Meanwhile, Tempus is trying to build a mercenary army loyal to the prince. Other tasks, such as reigning in his wayward sister, Cime, get in the way.

This story was beyond horrible! Constantly shifting points of view made it impossible to follow. Over use of pronouns made it impossible to tell who was saying and doing what. Too many things going on in the story made it unfocused and unpleasant to read. It was as if the editor assigned Morris a word count and asked her to continue a novel and call it a short story. I couldn’t finish it it was so bad!

Godson by Andrew J. Offut
The thief Hanse – aka “Shadowspan” has taken up sword and armor to become a swordsman at the behest of Tempus, whom he rescued from the evil Kurd, the vivisectionist. Hanse thinks back on the summons from the gods that made him aspire to be a swordsman. He is told that he must fight and defeat the god Vashanka for the good of Ranke – and fight him he does.

Best story in the book! Hanse is the series’ best character. He’s already well developed, but a whole new dimension is added to his character here. The family tree of the gods is a bit hard to understand, but the goal is clearly identified and Hanse is a well written hero.

Epilogue by Robert Lynn Asprin
Huge ships arrive on the shores of Sanctuary. Dispatches are sent to the capital city. Residents prepare for invasion. Hakiem the storyteller sits on the shore, watching the largest story of his lifetime unfold before him. Sanctuary, it seems, will never be the same.

Storm Season was incredibly uneven. It appears that editor, Robert Asprin, is trying to drive a narrative through short stories. In doing so, he’s asking his writers to contort their narrative in ways that don’t work in the short story form.

There are a couple gems in the book. Asprin’s introduction and Godson are wonderful fantasy. Steel was a serviceable story. But the rest just tried too hard to drive a unified story and that was not the original, stated purpose of Thieves’ World.

Posted by Brian Schwartz at 9:49 PM