In the Flesh: Books of Blood Vol. 5 By Clive Barker

In the Flesh: Books of Blood Vol. 5
By Clive Barker
Copyright 1986

The Forbidden
A woman developing a thesis idea related to urban graffiti ventures into a housing project to photograph the work of spray can artists. She enters one of the apartments and finds a disturbing image of a face painted on a wall with the door serving as the mouth. She later hears from residents about a couple gruesome murders. She relates her tale at a dinner party and one of the guests scoffs at the tales of brutal murder, telling her that that they were made up to scare kids and entertain adults. She returns to the housing project to get evidence to prove the man wrong. She tries to talk to one woman who she talked to earlier, but the woman won’t talk. Other people she finds won’t talk or have never heard the tales. She starts to believe she was being deceived. When she returns to that apartment, she finds the entity whose mug appears on the wall and learns the price of her disbelief. 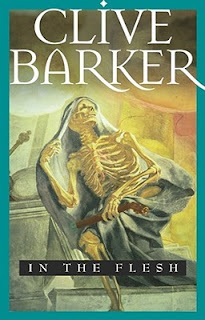 Barker took his time building this story, but it finished in a delightful rush of horror. The “monster’s” enticement to the main character was a clever play on urban legends and appealing to the desire for immortality. This story was adapted for the film, The Candyman.

The Madonna
A small time commercial developer – Jerry -- meets a potential financier at an old swimming pool complex. They explore and evaluate the potential of the building. While doing so, the financier – who’s also a mobster – sees a naked girl running through the complex. He tries to find her, but can’t. He’s bewitched by her. The deal goes bad and the mobster sets up a meeting at the complex. What was supposed to be a showdown between the two men instead evolves into an encounter with demigoddess. Jerry is transformed into a woman.

This one brought in elements of H.P. Lovecraft, but not particularly effectively. There was a lot of story here that could have used some more character development.

Babel’s Children
An English tourist breaks down in the middle of nowhere in rural Italy. She is drawn to a walled compound after hearing shots fired and seeing a man fleeing from another man who is dressed like a nun. When she enters the compound, she is taken prisoner. She learns that she is being held in a compound that is inhabited by the most brilliant minds of the 1960s. These scholars and philosophers were gathered and placed here as the Cold War developed. Their job was to keep the world from destroying itself by making wise and enlightened policy for the world’s nations. They run the world while its elected and appointed leaders serve as puppets. But the men have grown tired and old and some of them want to escape. They look to the young woman to help them.

This story worked well. Barker took his time in developing his characters and building his plot. The cross dressing was rather gratuitous as it was featured prominently in the story, but never explained.

In the Flesh
A career criminal named Cleveland gets a new cellmate. Tait has arranged to be thrown into prison to reunite with his grandfather who was executed in the prison decades before for killing his entire family except for Tait’s mother, who escaped. Tait is able to locate his grandfather’s unmarked grave and apparently commune with his spirit. Cleveland begins experiencing vivid dreams of a city where killers are doomed to relive their crimes through eternity unless they can find a replacement. When he’s awake at night, a dark shadow visits their room and Tait communes with it. Cleveland tries to convince Tait that his grandfather’s spirit is playing him for a fool, but Tait isn’t buying it.

I have a passion for a well told prison tale and this one is pretty darn good! Cleveland is well developed – a simple man with simple thoughts thrust into a metaphysical situation. The plot is not a particularly original notion of Purgatory, but it is well executed with a well paced plot. To top it off, Barker adds some of the most atmospheric narrative I’ve ever read. It’s easily the best story in the book.

Posted by Brian Schwartz at 5:15 PM