Clive Barker experienced some success on the big screen by 1992 with adaptations of his story, Rawhead Rex and his Hellraiser franchise. However, it was his take on urban legends and their sources that would lead to what is probably the finest movie ever based on his work. 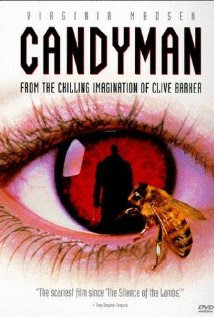 The story, The Forbidden, did not have urban legends as its plot leader. In the story, the main character was studying urban graffiti when she fell into the legend of the stalker of housing projects. In the movie, A graduate student named Helen Lyle stumbles onto the legend of the Candyman who stalks Chicago’s Cabrini Green housing project while interviewing undergraduate students about urban legends.

The Candyman is an urban take on the folklore of the notorious Bloody Mary. Legend has it that if you say Bloody Mary five times while looking in a mirror, she will appear. Bloody Mary has been entertaining generations of preteen girls at slumber parties. While the Bloody Mary legend has connotations of a more rural period, the Candyman is black, urban, and violent.

Armed with this knowledge, she and a fellow grad student visit the Cabrini Green to photograph graffiti and crime scenes related to the Candyman. She explores an empty apartment and finds the painting depicted in the short story as a striking face with a hole in the wall at the mouth. The hole in the mouth is the missing medicine cabinet. Before the face, on a makeshift altar, is an offering of candy. Written throughout the walls in the complex is the phrase, “Sweets for the sweet.”

Helen and her friend make the acquaintance of a resident, Anne Marie McCoy who invites them in and talks to them about Candyman. This woman believes he’s real and has heard the tales. Helen tells her it is all just legend.

Helen later learns from an academic rival that Candyman is based on a real person. He was the son of a slave who painted portraits in Chicago of the 1860s. He made a living at it. But when he ran afoul of a wealthy man’s daughter who he fell in love with and impregnated, his life ended horribly. The man cut off his painting hand and replaced it with a hook. He was then staked to the ground and smeared with honeycomb to attract bees. Candyman was stung to death.

Helen returns a few days and encounters a small boy who tells her how Candyman murdered a mentally challenged teenager in the public bathrooms in the complex. She enters the filthy, roach infested bathroom to take pictures. While there, she is confronted by a hook wielding man who says he’s the Candyman. He proceeds to beat her badly.

She is able to identify her assailant in a lineup and he is jailed. She returns home to her husband’s comments of “I told you so.” A few days later, however, when leaving the university, she encounters the real Candyman – a large black man with a deep resonant voice. She passes out and awakens in McCoy’s Cabrini Green apartment, covered in blood and holding a meat cleaver. She sees that the woman’s dog has been slaughtered. She finds Anne Marie in her baby’s bedroom crying hysterically over an empty crib, her baby gone.

Police arrest Helen on suspicion of kidnapping and for killing the dog. Without evidence that Helen was involved in kidnapping, police release her on bail. She returns home, but is visited by Candyman again at her apartment. He tells her that since she has been telling his believers that he’s nothing more than a legend, he must shed innocent blood to restore his legend. He invites her to become his victim and offers to trade the life of the baby for hers. He then attacks her.

While the attack is going on, her friend, Bernadette arrives at her apartment. She enters and Candyman kills her. Helen awakens in a pool of blood – Bernadette’s blood. This time she is arrested for murder.

Helen is confined to a mental hospital. Candyman visits her in the restraint room and again asks her to be his victim and live in immortality with the legend of her murder repeated for time immemorial. She freaks out and is sedated.

She awakens about a month later and is taken to the office of the hospital psychiatrist to discuss her upcoming court case and her ability to aid in her defense. She offers to summon Candyman to prove to him that the legend is real. She turns to a mirror and completes the ritual. The psychiatrist looks at her with a mix of skepticism and pity on his face when he is attacked and ripped apart from behind. Candyman throws the body aside and jumps from the window.

Helen escapes from the mental hospital and goes home. There, she finds her husband and the grad student setting up housekeeping in her apartment. She throws a tantrum and leaves. She heads for Cabrini Green and the face.

There, the Candyman tells her her life is over with her marriage, friends, and freedom all gone. She needs to become his victim to achieve immortality. She agrees, if he’ll sacrifice the baby. Candyman directs her to go to the pile of refuse in the courtyard where residents have assembled garbage for a bonfire.

Helen arrives at the pile and hears the cry of a baby deep inside. She climbs the pile and finds a way inside where she finds the baby. She is just about to take it out when the crowd arrives to start the fire. She tries to escape when Candyman grabs her and holds her, intending that she and the baby die in the fire. Helen fights and escapes. Candyman cries out in anguish as Helen craws out, her hair and back on fire, with the baby. She dies handing the baby to her mother.

Helen is laid to rest with her husband and colleagues from the university looking on. Just as the graveside ceremonies are getting underway, a contingent from the Cabrini Green arrives, led by Anne Marie and her baby. They have come to pay their respects to the woman who saved the baby and ended Candyman’s reign.

The movie ends with Helen’s husband standing before a mirror. He say’s Helen’s name five times while looking into it. Helen arrives and kills him with Candyman’s hook. A painting of Helen with her hair ablaze is tattooed on the walls of Cabrini Green by a graffiti artist. She is now the stuff of legends.

This was a fantastic adaptation of one of Barker’s more traditional works. It incorporated all of Barker’s clever story ideas while expanding – and Americanizing – the story.

The cast delivered top notch performances. Virginia Madsen delivered a performance as Helen worthy of the best of the scream queens. But it wasn't Madsen's screams that terrified. It was her eyes. Apparently, she was hypnotized for her encounters with Candyman to give her character subdued horror rather than the traditional screams of terror. It’s great acting and great cinematography as Madsen’s eyes are fixed and she looks as if she’s off in another world. Character actor and soap opera veteran Tony Todd played Candyman. Really, all he had to do was float around and look menacing. But Todd’s deep, resonant voice and the effects used by producers made him an awesome character.

The best written role was that of Helen’s friend, Bernadette. Too often in horror films, the “friend” is the one always complaining that this is a “bad idea.” That becomes trite and boring. Rose used Bernadette and her dialogue with Helen to develop a more plausible story. Making Bernadette likeable instead of nagging made her death more significant to the viewer.

Clive Barker served as executive producer of this film. His influence is seen in the inclusion of his most important story elements and also in the art depicted in the film. Barker is quite the artist as well as writer.

The story, The Forbidden, is a well crafted, exciting short story. One would believe it would be hard to make a movie that tops such a wonderful story. But Barker and Rose succeeded in this fun horror film.