The Vullens’ Curse By Natasha House

I was offered an e-copy of this novella through Smashwords.com in exchange for a review. 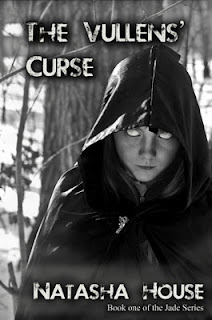 The book is the first in a planned series of stories set in the world of Jade, inhabited by several races and indirectly ruled by a race called The Deities.

King Lowen’s wife, Gal’adriel is mentally ill. She has bouts of lucidity, but they are few and far between. King Lowen is bent upon finding a cure for his wife, no matter the cost. The first step of his plan is to capture a Vullen.

Vullens are a humanoid race cursed by the Deities to live within the confines of their small domain. Vullens delight in death. They rejoice in it and can kill with just a song. Should a Vullen slip beyond the barrier at the edge of their domain, they suffer the Deities’ Curse which afflicts them with mottles and bruises and pain.

Within the Vullen domain, an unusual girl is born to an unusual mother. The mother hates violence and death and is determined to raise her child to do the same – in direct defiance of her people’s customs. The child is born and shortly thereafter, the mom flees into the woods with her husband and others in hot pursuit. She is able to hide the baby before she is killed. Before the Vullens recover the child, she is visited by a Deity.

Young Deilia visits the Deities as a child and learns their curing song. However, she has trouble mastering the killing song of her people much to the embarrassment of her father who fears that his daughter will become a social outcast because she does not relish death as she should.

Deilia eventually escapes her people and is captured by King Lowen’s people and placed in a dungeon until the king can determine precisely what to do with her. Lowen’s son is horrified and outraged that the king has placed such a dangerous being in the castle where his children live. He worries for his little sister as he prepares to go off to school.

Deilia is left to stew in her cell. When a slave brings her food, she notes that the slave is of a race that dwells in warm climates. Yet, it is unaffected by the cold climate in which he is enslaved. Curious, Deila sings the healing song. The song “heals” the slave’s ability to withstand the cold. He dies. Deila is repulsed by the fact that she revels in the death as his the custom of her people. She’s afraid that she’ll come to love death.

King Lowen, originally intending to use the Vullen to capture a member of a canine like race called the Wolfinic who are known healers, now considers using the Vullen to heal his wife. He takes another slave to Deilia’s cell and asks her to cure him. Deila is reluctant. The king promises that the slave will immediately be taken to his homeland so the heat does not kill him. Deillia agrees and sings the song. The boy is immediately taken. Unbeknownst to Deilia, he dies of heat exposure almost immediately.

The novella ends with the king weighing his options while his wife enjoys a “good” day of mental health.

House introduces a number of characters and subplots that I did not discuss here because they do not yet bear directly upon the story. The Wolfinics have been introduced and developed, but we do not know how they will be used. The slave race has been introduced, but we have no insight into the main plot. The Deities true nature and motivations have not yet been developed.

This self-published novella has a lot going for it. House develops her characters well. They are interesting. They are consistent yet conflicted in their actions and motivations. So far, they are all sympathetic with a true villain yet to emerge.

The story, which seems to be embryonic even at the end of the first volume, is entertaining at its core. A lot of undeveloped subplots have been introduced and I kept anticipating their incorporation into the main story, but it did not happen in this volume. The novella opens with a Wolfinic encounter with a Vullen who tries to lure him to his death. We then get a thorough development of Wolfinic culture and society before they disappear from the first installment. Perhaps opening the story closer to the central plot would have made for more effective story telling.

Being self-published, House’s novella suffers from not having the trained eye of a professional editor revise and edit it to strengthen the story and writing. While House does a solid job of telling her story, her verbiage is sometimes tedious and occasionally downright bad. Not every person or object needs to adjectives. Adverbs should almost always be avoided. The best advice any person gave every writer was Strunk and White’s rule, “Avoid unnecessary words!” House is sometimes prone to using three words where one will suffice.

No writer is his or her own best editor. Words, phrases, subplots and elements of plot that the writer holds dear may not actually serve the story. Editors strike these without mercy. Often, writers, enraptured with their own prose, do not have the heart or the strength to do this. Such is the difficulty of producing a self published novel.

House, if she has not done so already, should pick up a copy of Strunk and White’s Elements of Style and Stephen King’s On Writing. Following the edicts of these three accomplished writers and grammaritarians should help her hone her editorial skills and sharpen her prose.

Despite its lack of polish, Vullen’s Curse is a solid fantasy story that is suitable for teens and adults. If House develops the many subplots she’s introduced and incorporates them into her story, she’s going to have a solid and marketable book.

Posted by Brian Schwartz at 3:46 PM