Book to Movie: Paycheck (2003)
Screenplay by Dean Georgaris
Directed by John Woo
Based on the short story, Paycheck by Philip K. Dick

Reading Philip K. Dick’s short fiction, it is easy to ascertain why so many movies are made based on his work. Most contain plenty of action, lots of plot, and contain a moral. While his short story, Paycheck, first published in 1953, lacks any overall moralistic message, it has action, plot, and a puzzle of sorts which gives it all it needs to succeed as a movie. 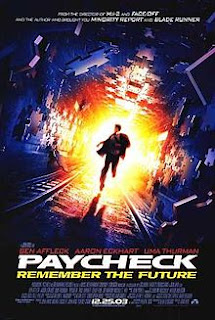 Dick’s story starts with engineer Jennings (Ben Affleck) returning from the mission in question. In the movie, we are given an introduction to Jennings and his technique of undertaking technical espionage missions and then having his memory erased. The movie opens with him returning from a mission where he steals holographic technology for personal computer monitors, making his sponsor quite rich.

His billionaire buddy, Rethrick recruits him again – this time for a two year hitch. The payout will be in the eight figure range. Jennings agrees and is injected with a chemical that will allow him to conduct his business without remembering.

The story falls back in line with Dick’s version here. The possessions include a pack of cigarettes, a can of hair spray, a book of matches and sundry other items. He takes his stuff and leaves the bank. He is immediately taken into custody by the FBI. They tell him that his name appears on several patents related to a decommissioned government product. The technology has gone missing.

The subject him to electronic interrogation, but his memory has been erased. He escapes the FBI using some of the materials in his envelope that contained his possessions. He flees, but becomes the target of the corporation for whom he worked. They fear he’s talking to the feds and want him dead.

He is able to find his girlfriend of the past two years and meet up with her at a local restaurant where agents from the company make another assassination attempt. She helps him escape and they dig deeper into Jennings’s activities for the last two years. He finds that he was working with lasers and lenses to develop technology that allows the user to see into the future. The government sees it as dangerous and the corporation sees it as profitable.

Meanwhile, the corporation is struggling to recover the records of Jennings’s research. Before he left their employ, he looked into the future and saw the havoc brought about by his invention. So, he sabotaged the computer and packed the items he would need to come back and destroy it in the near future.

Eventually, all forces converge at the Alltech Corporation’s headquarters. Alltech’s people, including its billionaire owner shoot it out with the G-men while Jennings and his girlfriend try to destroy the computer. The computer is destroyed in an explosion that takes out the Alltech Corporation. Jennings and his girlfriend escape, but are listed as being among the dead by the FBI who hopes he’ll just disappear.

The movie ends with Jennings’s and his girlfriend (Uma Thurman) operating a greenhouse and nursery. In the twist, Jennings finds one last item left from his envelope of possessions. That item makes him a millionaire.

Paycheck was an average movie. It was better than I thought it was going to be based on critics’ reviews that called it lackluster with uninspired acting and directing.

It’s certainly not Ben Affleck’s finest performance. Affleck was the weakest performer in the movie. But Tarantino’s goddess, Uma Thurman makes up for Affleck by carrying the action.

Those who complain that the movie does not do the story justice are not being fair. Dick’s hero was motivated by money. Jennings was motivated by a desire to save mankind. So while there may have been a different theme to the movie, the movie’s theme was nobler than was Dick’s. I think Dick would have been okay with it.

The problem with Paycheck is it relies on the standard formula for chase movies. It has the requisite Mexican standoffs, car chases, and explosions. The twist with the postage stamps that reveals Jennings’s real motives is clever, but not nearly clever enough to lift this film above being simply average.